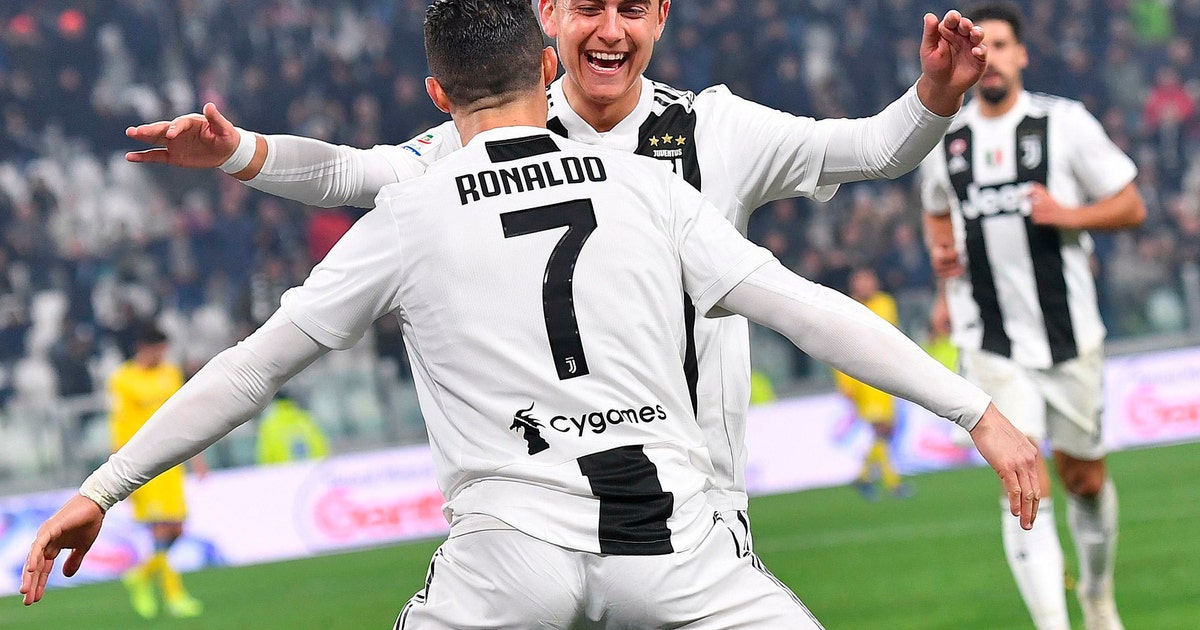 MILAN (AP) — The flourishing partnership between Cristiano Ronaldo and Paulo Dybala has led to a joint celebration.

Dybala scored his first league goal since Nov. 3 in Juventus’ 3-0 Serie A win over Frosinone last Friday and celebrated by merging Ronaldo’s distinctive celebration — of jumping and turning in the air while letting out a yell — with his own mask gesture.

Ronaldo had combined their celebrations after scoring in the previous match.

Dybala later posted several pictures on social media of the two of them celebrating, with the caption: “Give a title to this album… (hashtag)dybalamask (hashtag)siuuuuuuu or …. (hashtag)siuuumask.”

Ronaldo, who had set up Dybala’s goal, performed their combined celebration again when he scored the third goal against Frosinone, following a pass by Mario Mandzukic.

The former Real Madrid forward has already developed a good partnership with Mandzukic and it now appears as though his understanding with Dybala is developing swiftly, too.

That is causing Juventus coach Massimiliano Allegri a selection headache for Wednesday’s Champions League round of 16 game at Atletico Madrid. All three forwards could play, with Dybala dropping deeper, as has happened on a number of occasions this season.

“We’re going to Madrid to score,” Allegri said. “Obviously it will be a different game, but we are fine.

“I still have some doubts on the formation — the important thing is that the challenge is approached with the right focus.”

Juventus has scored three goals and conceded none in each of its previous two matches. Moreover, Ronaldo has scored 22 times in 31 matches against Atletico.

Napoli slipped to its second successive 0-0 draw in Serie A and 13 points behind Juventus.

Carlo Ancelotti’s lineup had 26 shots against Torino on Sunday and hit the post but couldn’t find the back of the net, and its wayward finishing has let it down this season.

“It’s an unfavorable period for us in which the ball doesn’t want to go in despite the numerous chances we’re creating,” midfielder Piotr Zielinski said.

“Today as well we had so many chances to score but we can’t manage to finish them off. Certainly it’s our fault but it’s also true that we’re not lucky. We deserved more not only today but also in other matches.”

Radja Nainggolan is back to his best and demonstrating the scintillating talent he displayed so often at Roma.

Nainggolan scored for the first time since Nov. 3 on Sunday, netting the winning goal to help Inter Milan to a 2-1 victory over Sampdoria.

The Belgian midfielder also made some incisive runs with the quick bursts Roma and Serie A fans had become used to in previous seasons.

He had already shown hints of that in the previous match, where he set up the goal for Inter’s 1-0 win at Parma.

“I had problems in the past, now I’m thinking only of playing and of giving my best for Inter,” Nainggolan said.

Nainggolan has struggled since joining from Roma in the offseason in a deal which valued him at more than $40 million. The 30-year-old had injury problems but was then banned for a match in December after repeatedly turning up late for training.

Since then he has knuckled down. He also underwent a strict training regime at the start of the year to lose weight and regain full fitness.

Nainggolan could perhaps give some advice to Mauro Icardi, who was watching from the stands at San Siro with wife and agent Wanda Nara after a difficult week for the club and its star forward.

Icardi was stripped of his captaincy on Wednesday amid protracted contract negotiations and the Argentina international then pulled out of Inter’s squad for the Europa League trip to Rapid Vienna and the Sampdoria match, officially with a knee injury.

“I hope the matters off the pitch will be resolved,” Nainggolan said. “The team is united and we want to win.

“I think Icardi has always given his all. I hope for him and for us that he comes back as soon as possible.”