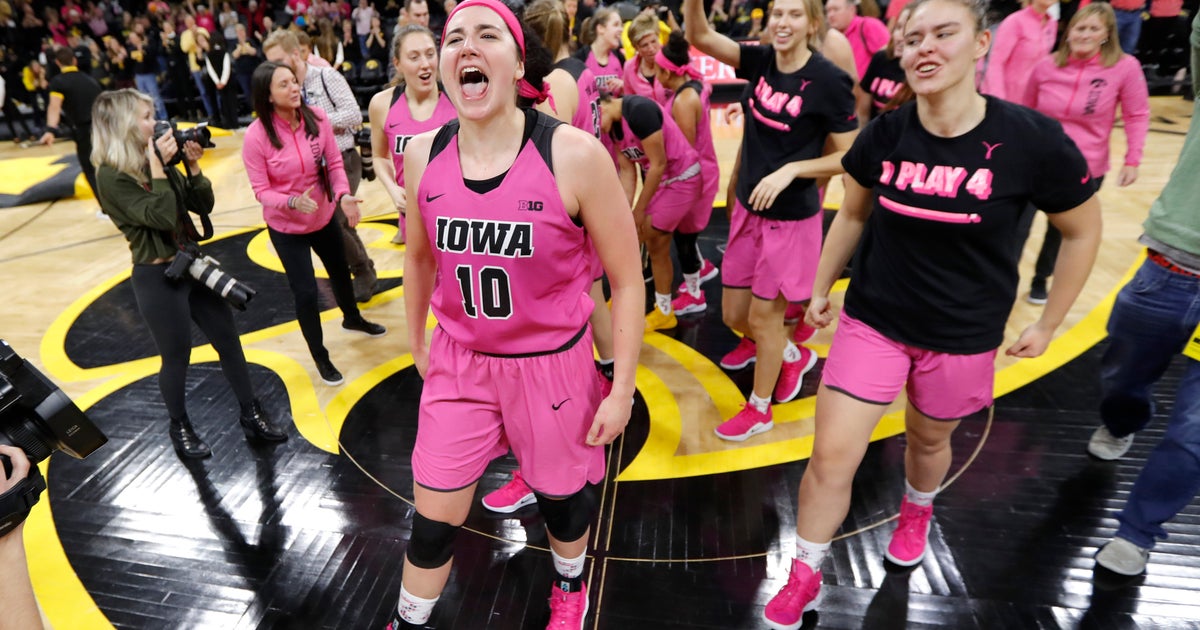 NEW YORK (AP) — Women’s basketball teams across the country found many different ways to honor cancer survivors this week as part of the Play4Kay initiative.

Texas A&M and Iowa had their players wear names on their jerseys of people who had touched their lives and battled cancer.

Aggies coach Gary Blair had a jersey with the name of ESPN sideline reporter Holly Rowe on the back for the team’s game Thursday against LSU. Rowe, who fought desmoplastic melanoma, a skin cancer, was the first to interview Blair on the court in Indianapolis after A&M won the NCAA championship in 2011.

“Coach Blair and I have shared some special moments, like when his team won the national championship and he did the ‘Dougie Dance,’” Rowe said in an email to The Associated Press. “He has done so much for women’s basketball. When I heard he was honoring me as a survivor, of course I cried. I haven’t really processed yet that I am a survivor because I feel like I am still fighting. But maybe that is what surviving is, thriving, living and loving through the worst of cancer. Coach Blair honoring me does make me feel strong. I will work hard to keep making him proud and help, honor and uplift survivors everywhere.”

The game had special meaning for Texas A&M assistant coach Bob Starkey. His wife, Sherie, is a breast cancer survivor. He and his wife donated $1,000 to the Kay Yow Cancer Fund in honor of the 1,000 students who came to the game Thursday.

Iowa also had its players don special jerseys for its game Sunday against Maryland.

“We always talk about as a team, even before the season starts, that we’re playing for the name on the front of our jerseys. But it’s really special that we get to put the name on the back of our jerseys, someone in our life that’s been affected by cancer,” Iowa’s Kathleen Doyle said. “It’s a really powerful feeling. I’ve got my grandma on the back, and I never got to meet her, but I know that she’s watching and that she’s really proud. It’s really special.”

All the games across the country are inspired by former N.C. State coach Kay Yow, who died 10 years ago after a 22-year fight against breast cancer.

FEELING BETTER: DePaul coach Doug Bruno is counting his blessings every day. It’s been nine weeks since he had spinal fusion surgery and he’s still on the mend.

“I was afraid I wouldn’t walk or coach again,” Bruno said after his team beat St. John’s on Sunday at Madison Square Garden. “Thank God it went well and it released the pressure on my spine.”

Bruno started rehab three weeks ago and his legs are getting stronger.

“I can walk and am pain free. But I’m not strong enough yet,” he said. “You don’t know how weak your legs are until the therapist pushes you.”

NEARLY PERFECT OFFENSE: Villanova lit up the scoreboard in the third quarter against Georgetown on Friday. The Wildcats scored 39 points, going 17 for 18 from the field. Kelly Joket made all seven of her shots, and Mary Gedaka was 5 for 5. The team scored on all 17 possessions it had in the quarter and won the game 91-43.

ROUGH WEEK TO BE RANKED: A dozen of the Top 25 teams lost games this week, including No. 2 Louisville, No. 5 Mississippi State and No. 8 Marquette. The Lady Bulldogs and Golden Eagles fell to unranked teams in Missouri and St. John’s.