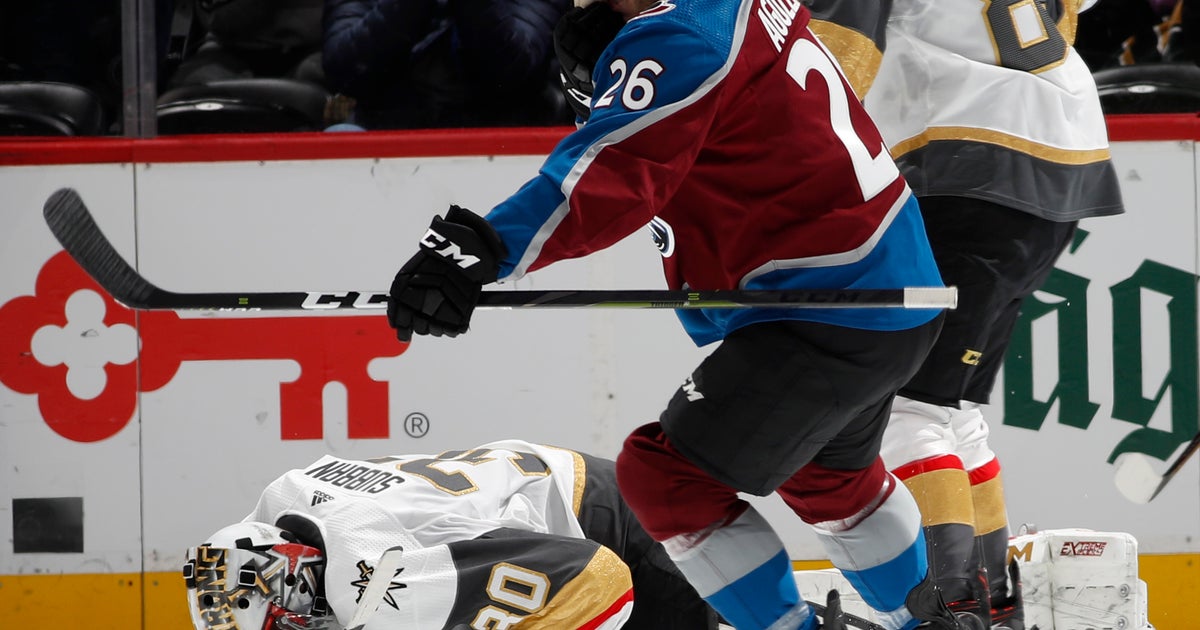 DENVER (AP) — When the moment arrived, Andrew Agozzino was ready — big right fist pump, coupled with a glide on his right knee and even a little yell.

This goal celebration was a long time in the making.

Agozzino scored his first NHL goal and added an assist, Semyon Varlamov stopped 40 shots for his second shutout of the season and the Colorado Avalanche ended a six-game home skid by beating the Vegas Golden Knights 3-0 on Monday night.

“Just pure excitement,” Agozzino said. “It’s special and tough to put into words. There was a lot emotion after I saw it go in.”

The 28-year-old Agozzino was recalled Sunday from Colorado of the AHL, where he led the Eagles with 22 goals and 28 assists. In his 11th NHL game — and first since April 9, 2016 — Agozzino pushed a shot past Malcolm Subban off a pass from captain Gabriel Landeskog. It gave Colorado a 2-0 advantage in the second period. The assist marked the 400th career point for Landeskog.

Agozzino also happened to be the oldest Avalanche skater on the ice at the time of his first goal. As for what he will do with the puck, well, he might give it to his father. Or just keep it.

“He’ll be fighting me for it,” cracked Agozzino.

Tyson Jost and Matt Calvert also scored as the Avalanche won their first game at the Pepsi Center since Jan. 19.

Varlamov was brilliant all night, with little traffic screening his vision. He had 15 saves in the third period.

“It wasn’t like a tough game where there are lots of screens in front and you can’t see anything,” Varlamov said. “The guys did a tremendous job. I saw most of the shots.”

Subban had 35 saves for a Golden Knights team that’s now dropped eight of their last 11 games. Subban started back-to-back games for the first time all season with Vegas electing to rest Marc-Andre Fleury.

“Their goaltender put up a perfect performance tonight and that’s what it took,” Subban said of his counterpart. “It’s tough to lose games like this, took a full 60-minute effort and I needed to make a few more saves tonight. Got to correct some mistakes and move forward.”

Vegas coach Gerard Gallant was hoping his team could ride the momentum from a 5-1 win over Nashville the other night. It didn’t happen.

“Not much you can do. We played a pretty good game tonight,” Gallant said. “It was a 3-0 game but it really should’ve been a 6-5 game. The goalies were excellent.”

Calvert gave Colorado a three-goal cushion with 13:07 remaining. The play was reviewed when it appeared he knocked it in with his glove. But the officials ruled he last powered in the puck with his stick after it struck his glove.

Early in the first period, Jost stole the puck down low early and made a nifty spin move to score his first goal since Jan. 2. The young center was in such a scoring funk he was briefly sent to the minors for some more work. Jost celebrated his goal in style by dropping to a knee and skating toward the boards.

It hasn’t exactly been home-sweet-home for the Avalanche this season with an 11-12-5 mark. This after such a dominant showing a season ago when their 28 home wins matched the franchise record set by the 2000-01 Stanley Cup championship squad.

“It’s not like we go out there and don’t want to play at home,” defenseman Nikita Zadorov said. “We’re trying.”

NOTES: Vegas LW Tomas Nosek returned after not playing in the last three games. … Avalanche F Colin Wilson (upper body) skated with the team Monday and could soon be available. … D Ian Cole (upper body) remains sidelined indefinitely. … Landeskog joins Tampa Bay’s Nikita Kucherov as the only members of the 2011 NHL draft class to reach the 400-point plateau. … Agozzino assisted on Calvert’s goal. It was his fourth NHL assist. … The shutout was No. 25 in Varlamov’s career. … Colorado is now 0 for 26 on the power play over their last nine games.