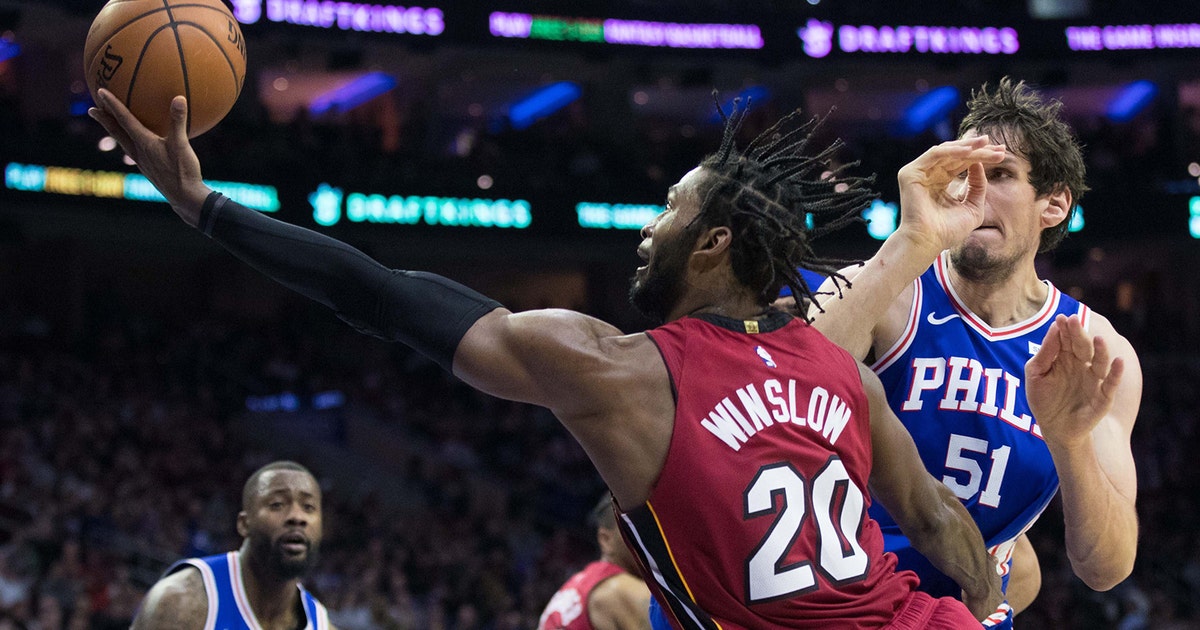 PHILADELPHIA (AP) — Tobias Harris had 12 of his 23 points in the fourth quarter, JJ Redick hit a late 3-pointer and the Philadelphia 76ers overcame All-Star center Joel Embiid‘s absence to beat the Miami Heat 106-102 on Thursday night.

Ben Simmons added 21 points, Boban Marjanovic had 19 — including three free throws in the final 1 1/2 minutes — and Jimmy Butler 18. Embiid will be out at least a week with a sore left knee.

Kelly Olynyk then missed a 3-point attempt, and Marjanovic made the first of two free throws with 38.3 ticks left to put Philadelphia up five.

Marjanovic, starting for Embiid, had 11 points and seven rebounds to help Philadelphia to a 23-13 lead before being lifted with 3:34 left in the first quarter. He returned 3 ½ minutes into the second, finishing the half with 16 points and eight rebounds while making all six of his field-goal attempts to help the 76ers to a 57-50 halftime lead.

The 37-year-old Wade, playing in his last season, was honored early in the first quarter with a highlight video that included a tribute from 76ers great Allen Iverson. Philadelphia fans gave Wade a standing ovation following the video, and the Miami star pounded his heart and waved back in appreciation.

Miami: G Goran Dragic was inactive. Dragic, who had right knee surgery in December, practiced Wednesday and a return to the court on Thursday was thought to be a possibility. An All-Star last season, Dragic is averaging 15.3 points and 4.9 assists. … The Heat dropped to 15-15 on the road. They are 11-16 at home. … James Johnson left with an apparent left shoulder injury with 8:31 left in the first half and didn’t return. … Derrick Jones Jr. returned after missing eight games due to bone bruises in his right knee. He had nine points.