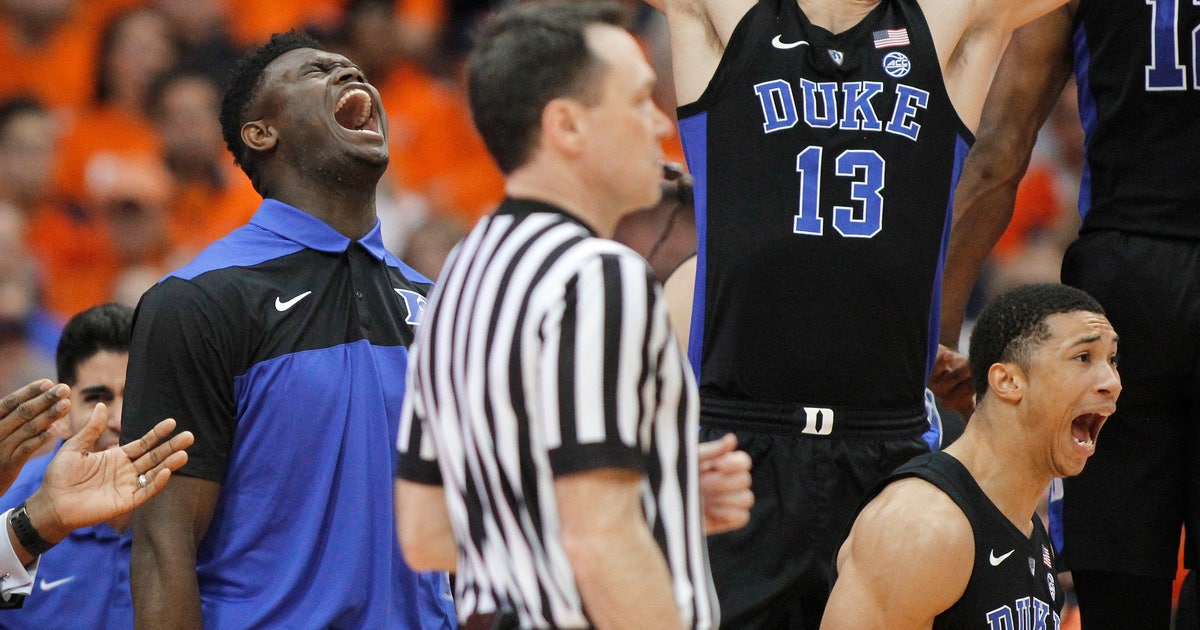 The past week offered something new.

The Blue Devils reclaimed the No. 1 spot in the AP Top 25 , then lost game-changing freshman Zion Williamson to injury in the opening minute of a lopsided home loss to eighth-ranked North Carolina. That left little time to regroup from the jarring setback and prepare for Saturday’s 75-65 win at Syracuse without Williamson.

“I asked my team, I said, ‘Look we just went through hell for 24 hours and I could depend on everybody,’” Krzyzewski said after the victory at the Carrier Dome. “‘We need to be that team on Saturday’ … and they were.”

Duke (24-3, 12-2 Atlantic Coast Conference) began the week by making its third stint of the season at No. 1. But Williamson’s sprained right knee — and the image of his left foot tearing through his shoe as he fell to the floor — early against the rivals Tar Heels on Wednesday night changed everything.

It sidelined the league’s No. 2 scorer (22.4 points entering the game), not to mention a dominating presence who creates matchup problems that can ripple throughout an entire lineup.

Krzyzewski said he met with players in the aftermath, calling Thursday “one of the toughest 24 hours I have had as coach at Duke.” That was part of the effort to turn the focus as the Blue Devils prepared to face an Orange team that had won in Cameron Indoor Stadium last month — though Duke was down starter Cam Reddish (illness) and lost point guard Tre Jones early to a shoulder injury in that one.

This time, freshman RJ Barrett led Duke with 30 points and seven assists while sophomore guard Alex O’Connell had a career-best 20 points in starting for Williamson. The Blue Devils juggled the lineup, benching junior forward Jack White (he was 0 for 23 from 3-point range in the previous 11 games) while reversing course on redshirting freshman Joey Baker.

The 6-foot-7 forward played five minutes and had two rebounds in his first college action.

It’s unclear how long Williamson will be out. Krzyzewski said the Blue Devils are “not going to rush anything.”

“As great as a player as he is, we have a lot of other talented guys on the team,” O’Connell said, “so it just shows once he gets back, we will be an even stronger team.”

GONZAGA BACK ON TOP?

With Duke’s loss, No. 2 Gonzaga is poised to take over at No. 1 in Monday’s new poll.

The Zags (27-2, 14-0 West Coast Conference) spent two weeks at No. 1 after beating Duke in the Maui Invitational championship game, then lost the top spot after falling to Tennessee on Dec. 9. They followed with a loss at North Carolina on Dec. 15, but haven’t lost since.

They beat Pepperdine and BYU in the past week by a combined 62 points.

Speaking of the Tar Heels, UNC had a big week with the victory against Duke followed by Saturday’s home win against No. 16 Florida State.

The Tar Heels (22-5, 12-2 ACC) have won 10 of 11 games, with the loss coming to No. 3 Virginia nearly two weeks ago. They snapped a nine-game winning streak by Duke to improve to 7-0 in league road games, then ended the Seminoles’ eight-game run.

There is now a three-way tie atop the ACC with Duke, UNC and Virginia — which beat No. 20 Virginia Tech and then rallied from 10 down to defeat No. 18 Louisville in the past week.

Kansas has been as reliable as it gets in winning at least a share of the Big 12 regular-season crown for 14 straight years. Things could be different this year.

The 12th-ranked Jayhawks are coming off a 29-point loss to No. 14 Texas Tech, their worst in any game since November 2014.

“It’s not going to do us too much good to watch this film, but we’ll get this behind us,” Jayhawks coach Bill Self said.

Now the Jayhawks are two games back of No. 23 Kansas State entering Monday’s matchup with four games to play.

Fifth-ranked Tennessee (24-3, 12-2 Southeastern Conference) hasn’t fared well in its matchups with its fellow league leaders. The Volunteers spent four weeks at No. 1 before losing to No. 4 Kentucky last weekend. A week later, they lost in overtime to No. 13 LSU.

The Tigers, by the way, won their only matchup with Kentucky this year and can claim the top seed in the SEC Tournament by winning out.