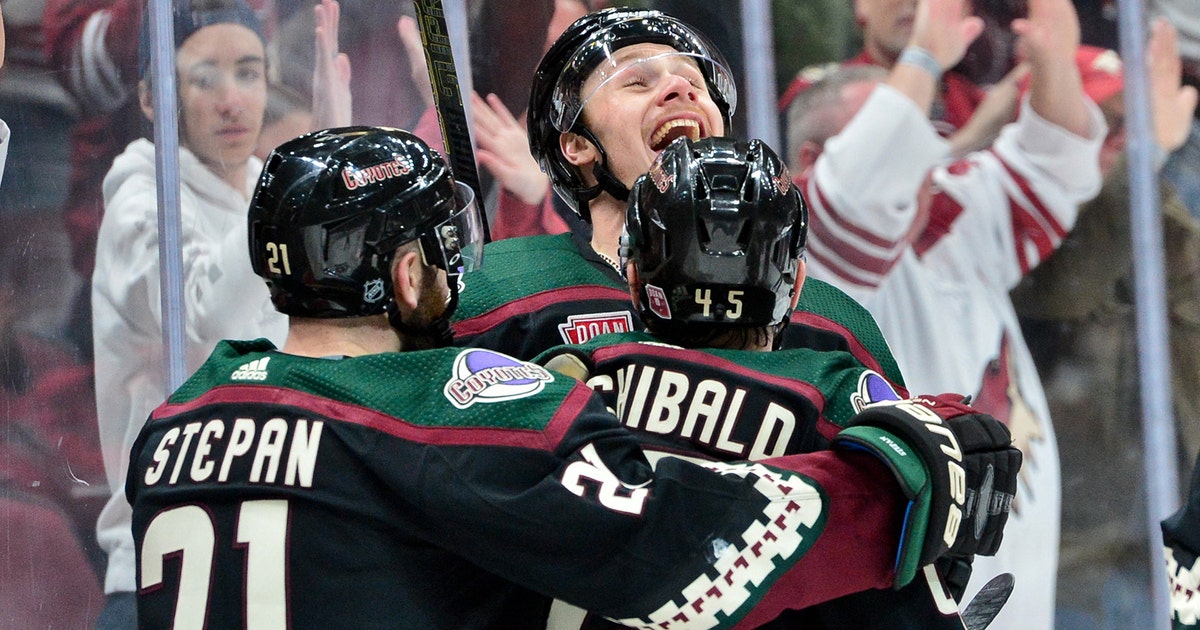 GLENDALE, Ariz. — Lawson Crouse scored the go-ahead goal in the second period and the Arizona Coyotes beat the Winnipeg Jets 4-1 on Sunday night after retiring the No. 19 jersey of former captain Shane Doan.

The Coyotes kept pace in the Western Conference playoff race, winning their third straight game and fourth in five. They are three points behind Minnesota for the second wild card.

Patrik Laine scored early before Winnipeg was shut out for almost 58 minutes. Laurent Brossoit made 20 saves.

A sellout crowd was on hand to see Doan’s No. 19 raised to the rafters at Gila River Arena before a game that matched the two teams he played for during his 21 seasons in the NHL.

Winnipeg drafted Doan in 1995, and the following season that version of the Jets moved to the desert. He went on to become the most prolific scorer in club history.

Laine gave the large number of Jets fans in attendance something to cheer about quickly. An early tripping penalty gave Winnipeg a power play, and Laine fired in Blake Wheeler’s pass with a one-timer at 2:11 of the first period.

It was Laine’s 28th goal of the season, second-most on the Jets. Wheeler got his 60th assist, second-most in the NHL.

Wheeler became the first player in franchise history to have 60 assists in consecutive seasons.

The Coyotes tied it at 5:43 when Richardson cleaned up Goligoski’s run to the net for his 12th goal of the season.

Brossoit stopped a pair of shots by Nick Cousins in the first period, and the Coyotes just missed a chance to take the lead when Vinnie Hinostroza pinged a post with a shot at 13:49 of the first.

In the second period, Crouse tried a backhand that went off Brossoit and back to the Jets’ Ben Chiarot, who deflected the puck into the net.

“That is a thing of beauty.” Keller snaps his 14-game goal-less skid and doubles the #Yotes‘ lead here in the second. pic.twitter.com/HY3JHNcESF

Keller made it 3-1 at 13:46. Alex Galchenyuk delivered a pass from along the boards right onto Keller’s stick for an open left-handed shot that eluded Brossoit. Keller reached 12 goals on the season, and Galchenyuk 21 assists.

The Coyotes came close to a short-handed goal in the final seconds of the second, but it was disallowed when officials ruled Goligoski kicked the puck into the net.

Archibald scored into an empty net with 31 seconds to play. Kuemper stopped 18 shots in the third period.

NOTES: The opening faceoff didn’t take place until about 40 minutes after the originally scheduled start because of the duration of the ceremony for Doan. … Several former teammates, including Jeremy Roenick and Curtis Joseph, were on hand for the festivities. So were other Arizona sports stars such as Larry Fitzgerald and Luis Gonzalez, as well as NHL Commissioner Gary Bettman. … Keller ended a 13-game goal drought. … The Coyotes opened a seven-game homestand, their longest of the season.