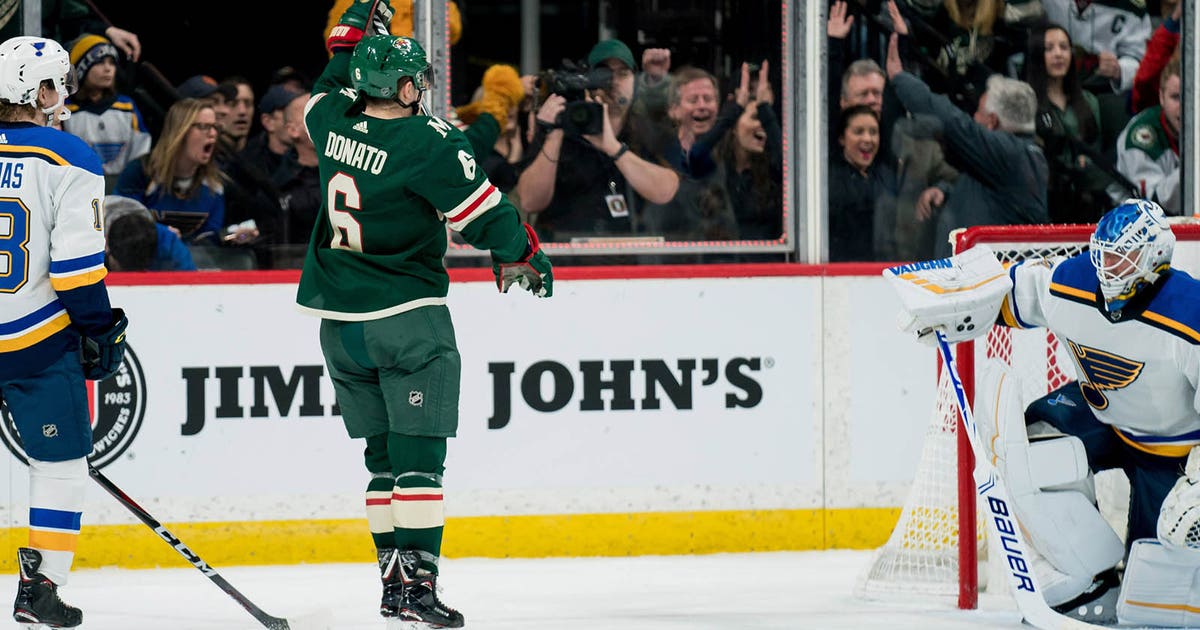 ST. PAUL, Minn. — Ryan Donato scored with 2:31 left in overtime to lead the Minnesota Wild past the St. Louis Blues 2-1 on Sunday night for their third straight victory.

Donato, who has four points in three games since being acquired by the Wild in a trade with Boston, launched his shot from behind the left circle to beat Blues goalie Jake Allen‘s glove for the winner.

Goal No. 1 with the @mnwild ends up being an @EASPORTSNHL OT winner.

Jason Zucker had the first goal and Devan Dubnyk stopped 27 shots for the Wild, who took three of four games from the Blues in the season series with the only loss a 4-0 decision here one week ago.

Alex Pietrangelo scored on a power play in the third period and Allen made 33 saves for the Blues, who lost for just the second time in their last 14 games after beating the Bruins in a six-round shootout on the road on Saturday night.

The Wild limited the Blues to five shots on goal in the first period and kept up the tight defense past the intermission, but good backchecking and can only get a team so far if the puck doesn’t go in the net.

Finally, after Eric Staal swooped behind the net and poked a pass in front of the crease, Zucker had a half-step on Blues defenseman Vince Dunn. He tapped in his 15th goal with 8:18 remaining in the second period , ending a scoreless streak by the Wild at home at a whopping 187 minutes and 42 seconds. They were shut out here by the Blues a week ago and by Anaheim on Tuesday.

Zucker, who was second on the team last season with a career-high 33 goals, scored for just the second time in 18 games.

The Blues picked up the pace after falling behind, though, and 7:26 into the third period they tied it with the man advantage following Ryan Suter‘s tripping penalty on Vladimir Tarasenko. With 41 seconds left on Suter’s sentence to the box, Pietrangelo let a slap shot rip through traffic that grazed Wild center Joel Eriksson Ek‘s shin guard and past Dubnyk.

Eriksson Ek had an earlier breakaway stuffed by Allen’s skate in the near corner of the net.

The Wild have allowed a power-play goal in eight straight games, with 10 allowed in 30 chances.

The Blues, who are 26-15-2 since Craig Berube replaced the fired Mike Yeo as coach, have not only surged past the wild card line but begun to threaten Nashville for second place in the Central Division that comes with home-ice advantage in the first round of the playoffs.

The Wild have been able to stay in control of a wild card spot for most of the winter despite their inability to assemble a significant winning streak, and with this victory they passed Colorado to retake eighth place in the Western Conference. The Wild have played one more game than the Avalanche.

NOTES: The Blues have scored four power-play goals in four games against the Wild this season. … Tarasenko, who assisted on Pietrangelo’s goal, has 34 points in 36 career games against the Wild including the playoffs. … Wild RW Pontus Aberg, recently moved up to the first line with Zach Parise and Mikael Granlund, did not return to action after playing 5:30 in the first period.