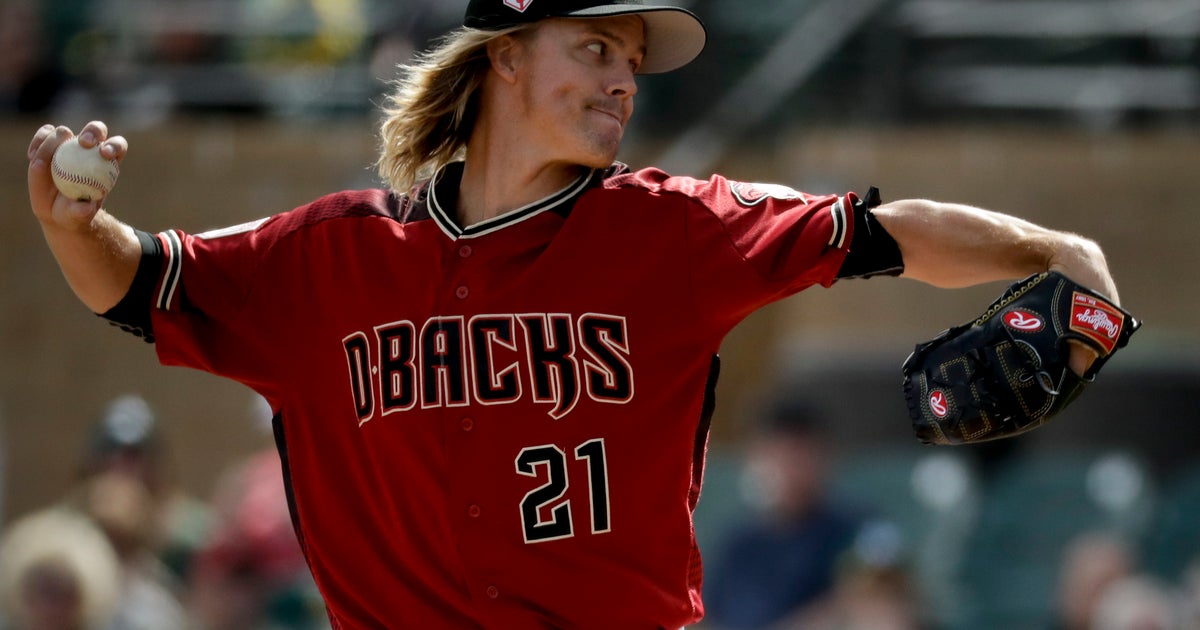 SCOTTSDALE, Ariz. (AP) — The Arizona Diamondbacks have tried to match up Zack Greinke with the same catcher per the pitcher’s request. On Monday, 24-year-old Carson Kelly got his first chance behind the plate in the ace’s first spring training start.

It was a good partnership. Greinke needed just 16 pitches — 14 strikes — to retire the Oakland Athletics in order over two innings.

“Get outs — that’s kind of the big thing for him,” Kelly said of Greinke. “He did that and he did it efficiently, too, without throwing a lot of pitches. I feel like that’s Zack Greinke-esque.”

Jeff Mathis was Greinke’s personal catcher last season but signed as a free agent with the Texas Rangers. Kelly, acquired by Arizona from the St. Louis Cardinals in the trade for Paul Goldschmidt, caught Greinke during his last live batting practice session as a tuneup.

Pitching on a back field and facing teammates, however, is different than a real game, even if it is an exhibition game.

“With the live BP, I was excited, very excited,” Kelly said. “After catching him and seeing his different pitches and things like that, it was a little more comfortable this time around and I think he felt the same.”

Greinke and Kelly are separated by one locker in the D-backs’ clubhouse, so they have plenty of opportunities to talk.

“I told him today, the first couple outings in spring are not how I’m going to pitch in the season,” Greinke said. “I wouldn’t even want him trying to think along with me because it’s just random stuff happening for the most part.”

What does Greinke look for in a catcher?

“Just pay attention and give a good effort,” he said.

“I don’t want people to read into it too far that he’s going to be paired up with Zack or I’m forcing this relationship to happen,” Lovullo said. “I wanted Zack to be exposed to him as I will do with other the catchers who have not necessarily caught him in a game. This is a good situation for Carson to catch his first game.”

The D-backs have carried three catchers in the past and other options in camp besides Kelly include Alex Avila and John Ryan Murphy and non-roster invitees Caleb Joseph, Daulton Varsho and Tyler Heineman.

“My plan would be to give everybody a shot at Zack because it’s a lot of fun to catch him,” Lovullo said. “He’s very pinpoint with a great game plan.”

“The one thing that Zack wants is for it to be the same guy,” Lovullo said. “That’s what he asked for from the first conversation I had with him two years ago. We want to make Zack as comfortable as possible. We’re going to try to find that perfect fit for him.”

After Monday’s outing, Greinke, 35, said he would not insist on a personal catcher if it means getting more offense in the D-backs’ lineup.

“I prefer one guy but with Alex, it’s not ideal to have him facing (Madison) Bumgarner and (Clayton) Kershaw so it makes it a little tougher,” Greinke said. “There comes a point where offense is important.”

Said Lovullo: “With Zack, we’ve opened up all sorts of dialogue over the past couple years that has enabled him to throw to that one guy and it’s worked, it’s worked very well for Zack.”

“I think he’s going to want to sample each catcher,” he said.

Kelly is excited at the opportunity.

“Not many people get to say they caught Zack Greinke,” Kelly said. “It’s an honor and I think it’s something that I’m excited to be a part of this core here.”

The Diamondbacks won 4-3 on a game-ending sacrifice fly by Heineman.

NOTES: Arizona OF Jarrod Dyson underwent an MRI on his midsection on Monday after experiencing some discomfort. … Lovullo said the team will ease pitchers Archie Bradley and Yoshihisa Hirano into games this spring because of their heavy workload last season. “We’re not concerned about getting them in there early,” Lovullo said. “How many outings, I’m not exactly sure. You’re not going to see them for a few more days.” … Monday was Ketel Marte’s first spring start in the outfield. He has made two outfield starts in 2015 with the Mariners but otherwise has played second, short and third. “He looked like a normal outfielder to me with how he was getting his breaks and reads,” Lovullo said. “That, to me, is the most important thing.” … Oakland’s Khris Davis, who has yet to play a spring game because of mild left calf strain, took batting practice on Monday.