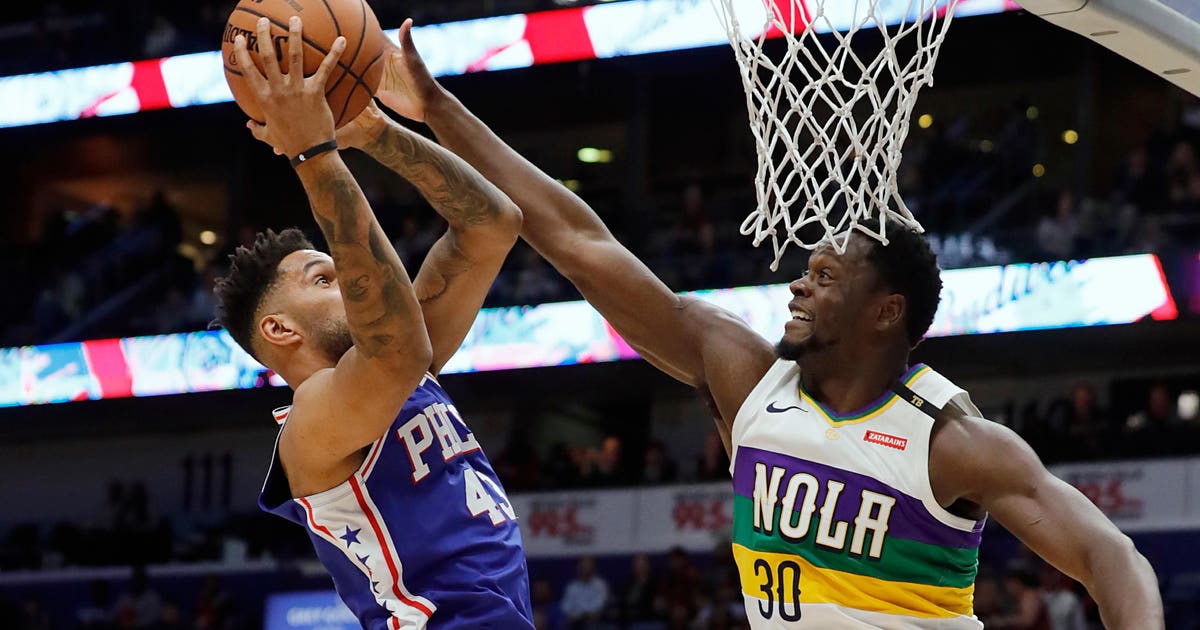 Harris scored 29 points, Simmons had 14 points and 12 assists, and the Sixers narrowly held off the New Orleans Pelicans 111-110 on Monday night.

“We wanted to win. We won. We’re happy that we won. A teammate got hurt. … It’s sad to see a teammate go down,” Simmons said when asked to sum up the night.

Marjanovic had 12 points, 10 rebound and two blocks in less than 22 minutes to help fill the void in the middle created by the absence of 7-foot All-Star Joel Embiid, who has missed all three of Philadelphia’s games since the All-Star break.

But Marjanovic’s right leg got tangled up between Pelicans forward Cheick Diallo‘s legs as both players crashed to the court after pursuing a rebound. Marjanovic needed assistance getting off the court and later used crutches to get the team bus.

Shortly after Sixers coach Brett Brown sought out Marjanovic in the trainer’s room, a team spokesman said the injury would be further evaluated on Tuesday, when an MRI was scheduled.

“It was tough to see him go down and be in pain. So, I’m praying that everything will be all right for him and we can get him back ASAP,” Harris said. “He did an amazing job out there when he was playing.”

Philadelphia nearly squandered a 10-point lead after Jimmy Butler‘s 12-foot jumper made it 110-100 with 2:48 left. The Sixers missed five shots and three of four free throws – including two misses by Jonathon Simmons with 9 seconds left – allowing the Pelicans a chance to win it with any type of field goal on their last possession.

“My head at the moment is completely with Boban, to be frank,” Brown said when asked about his team nearly squandering the lead. “So whatever level of disappointment I may have, I don’t feel it so much now. We won the game and I’m really thinking about him.”

With no timeouts, New Orleans scrambled to get the ball up the court after Philadelphia’s last missed free throw and E’Twaun Moore attempted a 25-foot heave from the left wing with about 3 seconds on the clock when he pulled up.

The shot was not close and Harris secured the rebound as time expired.

Gentry said the first option as to get the ball to guard Jrue Holiday.

“Obviously, we weren’t able to do that,” Gentry said, adding that Butler “did a great job” of hustling to contest Moore’s shot. “E’Twaun shooting that shot – we have to live with that.”

Anthony Davis scored 18 points in 21 minutes, but was taken out of the game for good with 5:11 left in the third quarter as the Pelicans continue limiting his playing time since his trade request in late January.

Holiday had 22 points for New Orleans. His 3-pointer pulled New Orleans as close as 110-107 with 1:36 left, but he missed a 3-point attempt that could have tied it with 45 seconds left and also missed a free throw with 18 seconds left.

Julius Randle added 19 points and 14 rebounds for the Pelicans, who trailed by as many as 17 points in the third quarter.

Pelicans: Elfrid Payton scored 10 points, giving him double figures scoring in all three games since he returned from a right ankle sprain that sidelined him the last nine games before the All-Star break. … Reserve forward Cheick Diallo made all four of his shots for eight points in 18 minutes, making him 12 of 12 from the field during his last two games.

Davis said he knew he would not play in the fourth quarter because he and Gentry discussed bunching his limited minutes on the court closer together during the first three periods.

“That way I can stay in a rhythm longer,” Davis said. “I’ve never been a guy who sat in the fourth quarter, you know, so it’s a little tough. But I’ll sit on the bench and cheer for these guys and they did a good job.”