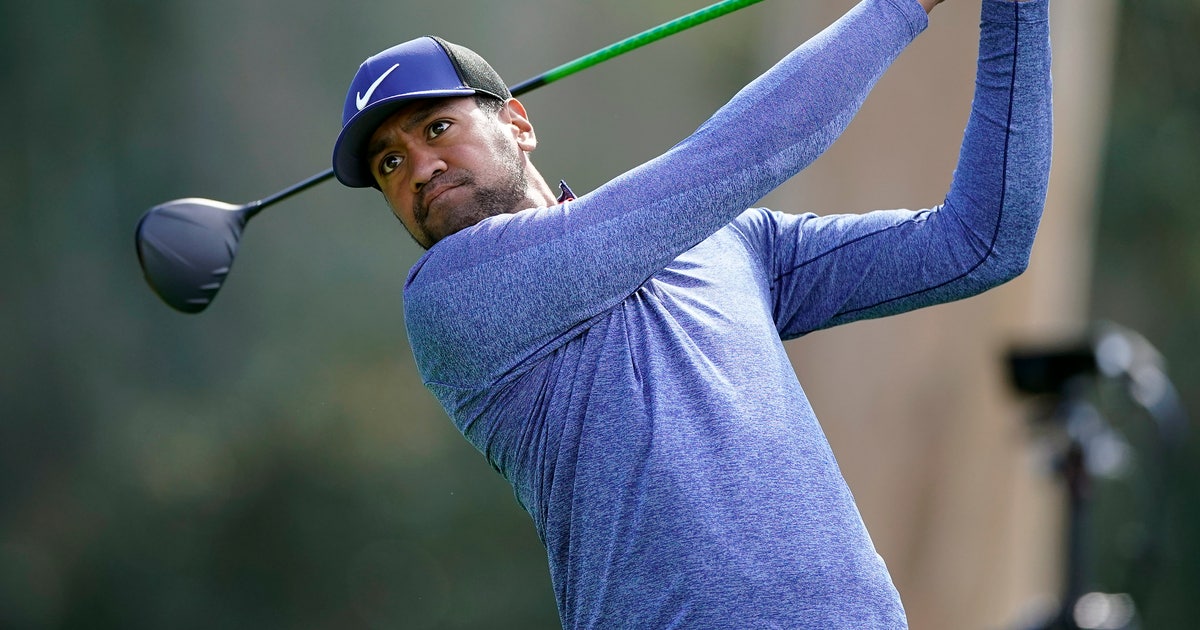 MEXICO CITY (AP) — One ruling in the Mexico Championship that didn’t get much attention involved Tony Finau, and the outcome was unlike anything he has ever experienced. He signed for a 74 in the first round. The next day, it became a 73.

“That’s never happened to me before,” Finau said after his final round to tie for 25th.

It started with his first shot of the tournament on the par-4 first hole, high and left and into the trees. Finau was lucky to find the ball some 10 feet up in a tree, which was in the middle of a fenced area that had been established as a temporary immovable obstruction.

He called for an official, and when Gary Young of the PGA Tour showed up, Finau said he was going to declare it unplayable. Young said he first had to identify it to make sure it was his, and Finau — helped by being 6-foot-4 with alignment shafts in his bag — was able to swat it down. Young proceeded to give him a free drop outside the fenced area, without making clear to Finau that it was a TIO and he was allowed relief no matter the lie of his ball.

“I told the scorer he was hitting his second shot,” Young said.

Finau still had in his head that he was taking a penalty drop, and after making par, signed for a 5.

“He didn’t understand all day why the score on the sign was different than he thought,” Young said.

The next morning, Finau bumped into Young and thanked him for his help. Young asked him how the hole turned out, and Finau told him he made 5 with the penalty. That’s when Young realized there was a problem.

“I took it to the committee and they were torn,” Young said. “I felt strongly there should be no penalty based on my miscommunication. We called the USGA, gave them all the details and they agreed it was a committee error.”

The score on Finau’s first hole of the tournament was changed after 36 holes.

“I told him it was my fault for not being more clear,” Young said. “Ultimately, it had the right ending.”

The Mexico Championship was only the second time Johnson had won with Woods in the field.

The other was the 2010 BMW Championship at Cog Hill.

Johnson has won against some of the strongest fields in golf, with 13 of those 20 victories awarding at least 56 world ranking points to the winner. That includes one major, six World Golf Championships and four FedEx Cup playoff events. The other two were the Genesis Open at Riviera, typically the strongest field of the West Coast Swing, and the winners-only field at Kapalua.

Because of time off, which led to a drop in his world ranking, Woods has played in only 15 of the 37 World Golf Championships with Johnson in the field dating to 2009.

R&A chief executive Martin Slumbers says the first few months of the new Rules of Golf have not gone as smoothly as he would have liked, though he concedes some of that was to be expected given the six years it took for a complete overhaul.

His one surprise is how players are choosing to leave in the flagstick for putts on the green.

Slumbers says the intent was save time, and it was mainly for the recreational players. Anecdotal evidence suggests it has had an effect on the amateur game, where players often don’t have caddies. He also thinks it helps the television viewer when players leave it in for long putts because they have a better idea where the hole is.

“I have been surprised by the number of professionals who are leaving the flagstick in for short putts,” Slumbers said Tuesday. “I think on long putts, I think it helps pace of play. … But it wasn’t intended as a performance option. We’ll see how it develops.

“It’s certainly not completely clear that it’s a performance advantage. Otherwise, all the players would be doing it,” he said. “So they each have their own view, and I’m sure that there will come an instance where a ball will get knocked out of the hole by the flagstick on a short putt, and that might make people think.”

Paul Casey was 3 under for his opening three holes of the third round at the Mexico Championship when he was trying to work out the yardage on the par-3 13th. His caddie, John McLaren, told him he needed to land the shot 17 paces from the front of the green, which Casey found odd because the pin was supposed to be 13 paces on.

That’s when they discovered one small problem.

“He suddenly looked in his book and he realized he had written down in his book every single pin that was wrong, and he couldn’t figure out why,” Casey said.

The hole locations McLaren took from the internet were for the Puerto Rico Open.

“And for the only time in his life, he didn’t double-check them in the morning sitting in the breakfast room,” he said.

McLaren heard plenty from his peers, courtesy of a major boost from Lee Westwood , who tweeted his blunder.

No one was laughing as hard as Casey. Besides, it wasn’t a big deal. Casey played to a position on the green regardless of the flag on No. 10 (par), and he could see where the flag was on the par-5 11th (eagle). Ditto for the par-4 12th, where several players hit driver near the green and it was easy to see from there.

For the final round, McLaren had the pin sheet from Mexico, not Puerto Rico.

“And we start off with three straight birdies,” Casey said. “It was brilliant.”

The majority of 36-hole qualifying will be the Monday (June 3) before U.S. Open week. Because the Canadian Open now precedes the U.S. Open (instead of the FedEx St. Jude Classic in Memphis, Tennessee), that qualifier moves to Rattlesnake Point Golf Club about 30 miles from Toronto.

The first qualifier will be two weeks earlier on Monday, May 20, on two courses in the Dallas area. That’s the week of Colonial, and it’s the Monday after the PGA Championship in New York.

The qualifier expected to have the most PGA Tour players remains Columbus, Ohio, the Monday after the Memorial.

Lee Elder is the first black to receive the Bob Jones Award, the highest honor presented by the USGA. Elder, who in 1975 became the first black to play in the Masters, will be honored the week of the U.S. Open at Pebble Beach. … The R&A says Women’s British Open champion Georgia Hall will become one of its ambassadors to play a key role in promoting girls and women in golf. Hall joins Padraig Harrington and Suzann Pettersen as R&A ambassadors. The 22-year-old Hall is the first ambassador to win all its championships at every age level — Girls’ Amateur, Women’s Amateur and Women’s Open. … Minjee Lee’s runner-up finish in Thailand moved her to a career-best No. 3 in the world. The 22-year-old Aussie has 25 top 10s in her last 56 tournaments.

Next week will be the fourth time Dustin Johnson has reached No. 1 in the world. Tiger Woods and Greg Norman each got there 11 times.

“This is not the time for knee-jerk reactions. This is the biggest change for 35 years, and it needs sensible, calm thinking as we watch what’s happening.” — R&A chief executive Martin Slumbers on the new Rules of Golf.