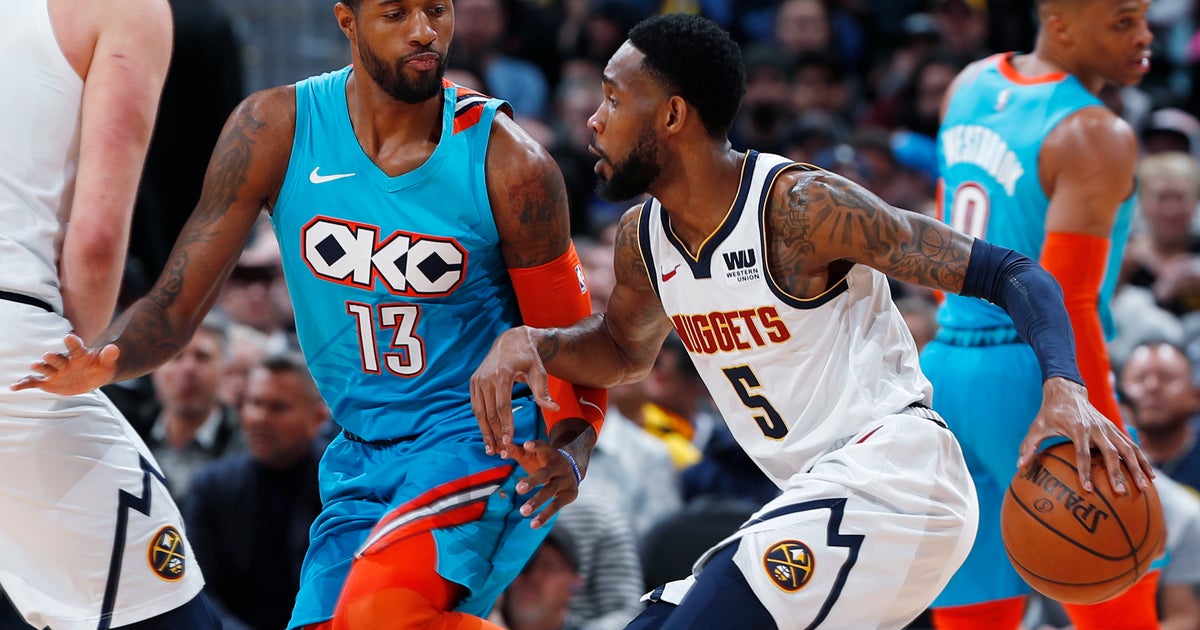 DENVER (AP) — Nikola Jokic scored 36 points, including five free throws in the final moments, and the Denver Nuggets fended off Oklahoma City’s late rally for a 121-112 victory Tuesday night in a matchup between two of the top three teams in the Western Conference standings.

Jokic added 10 assists and nine rebounds to finish just shy of his 13th triple-double this season for the Nuggets who won their fifth straight and ninth in a row at home. They improved to 3-0 against the Thunder this season, clinching the four-game season series between the Northwest Division rivals.

Will Barton added 23 points and Jamal Murray 20 for Denver, which extended its division lead over the Thunder to four games.

Paul George had 25 points to lead Oklahoma City which fought back from an 18-point deficit in the second half but could not sustain its rally in the late going.

Oklahoma City got back into the game by turning up its defense, forcing five turnovers in six Denver possessions in one stretch, to pull into a 97-all tie on a 3-pointer by Dennis Schroder with 6:02 left to play.

Westbrook followed by hitting a 3-pointer to give the Thunder its first lead since early in the first half.

Denver, though, fought back, retaking the lead on a 3-pointer by Murray.

The game remained tight down the stretch. Murray hit another 3-pointer and Jokic put in a layup around a Westbrook layup for a 112-106 Denver lead with 1:36 remaining. Jokic helped Denver solidify its lead and quash Oklahoma City’s comeback in the final moments by making five of six free throws to boost the Nuggets’ advantage to 117-108 with 44 seconds remaining.

Trailing by 13 at the half, the Thunder scored the first eight points of the third quarter, including 3-pointers by Westbrook and George to equal the number of 3s Oklahoma City had in the first half. But the Nuggets’ got going on offense again and pulled in front by as many as 18 points before George hit a 3-pointer from the half-court line as the Thunder pulled to 91-78 going into the fourth quarter.

Jokic connected on successive 3-pointers in the last 56 seconds of the second quarter, and Denver moved in front 64-51 at the half.

Thunder: G/F Andre Roberson, who has yet to play this season because of a left patellar tendon injury, has resumed light basketball activities and the Thunder remain hopeful he can return this season. “We’re all optimistic that maybe at some point, we can get him back,” Thunder coach Billy Donovan said. “He’s working really hard. He’s making strides. How that progresses, we’ll have to wait and see, but to me it’s encouraging to see he is kind of jogging around a little bit out there and he is shooting the ball.”