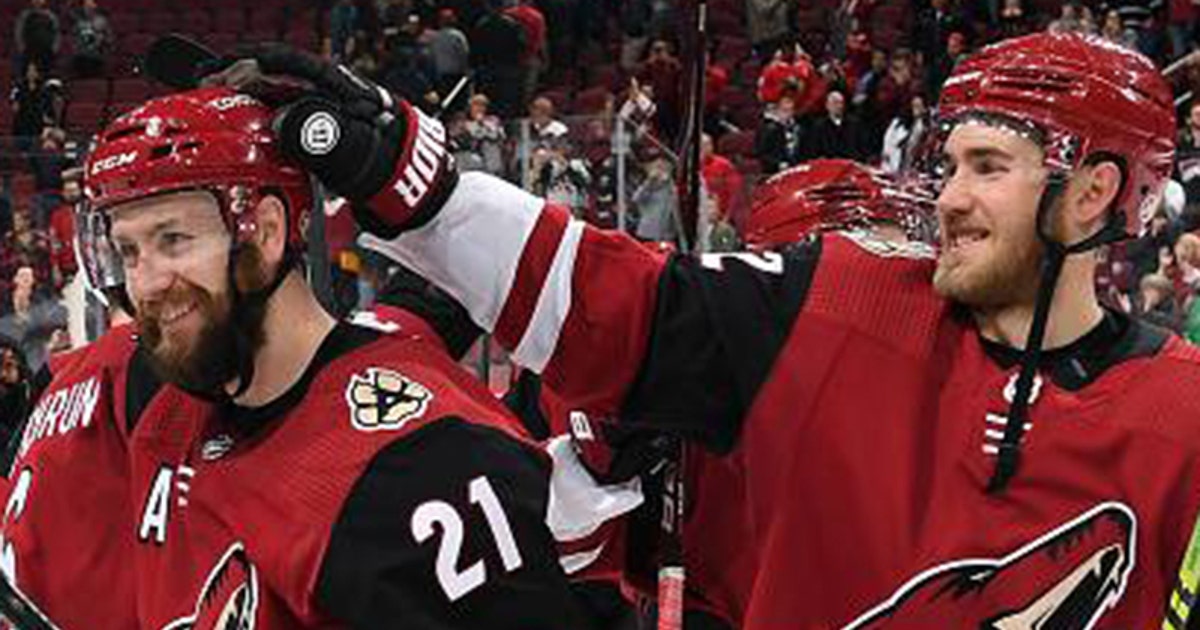 GLENDALE, Ariz. — Vinnie Hinostroza scored the deciding goal in a shootout, Derek Stepan had two goals and the Arizona Coyotes won their fourth straight game with a 4-3 victory over the Florida Panthers on Tuesday night.

Nick Cousins and Alex Galchenyuk both scored in the shootout, then Darcy Kuemper stopped Aleksander Barkov. Hinostroza ended it with some slick stickhandling and a shot that slipped past Roberto Luongo to move the Coyotes within two points of the final Western Conference playoff spot.

The shootout came after a wild finish to regulation and overtime.

Arizona blew a third-period lead, but Stepan scored the team’s 13th short-handed goal of the season to tie it with 6 minutes left. The Coyotes had a chance to win late in regulation, but hit the post three times on one power play.

The Panthers nearly won late in overtime, but Oliver Ekman-Larsson stopped one shot with his skate and Kuemper got his glove up to deflect another while lying on his stomach.

Don’t forget, that game never gets to the shootout if not for the saves of the game from OEL and Kuemper in OT. ?? pic.twitter.com/1WnITY0QNm

Luongo denied Galchenyuk on a breakaway, then made a nifty glove save on Stepan seconds later.

Arizona had a 2-1 lead heading into the third on goals by Stepan and Ekman-Larsson.

Jamie McGinn scored midway through the period on a redirect and Barkov scored after a nifty move, using his skate to control Troy Brouwer’s pass before beating Kuemper.

Stepan tied it, toe-dragging the puck before wristing a shot past Luongo.

Luongo stopped 27 shots in relief of James Reimer, who left early in the second period after appearing to be hit in the head by a stick.

Gonna need to repaint the pipes at the north end after that last #Yotes power play. pic.twitter.com/ikJIeeUWIM

Reimer was sharp in the first period, but went off 32 seconds into the second when Arizona’s Josh Archibald was pushed from behind and hit him in the mask with his stick.

Stepan scored his first goal from behind the net on a shot that caromed off Luongo’s glove midway through the second.

NOTES: Florida C Jayce Hawryluk went out early in the first period with a right leg injury after a big hit in the corner by Ilya Lyubushkin and did not return. … Ekman-Larsson tied David Babych for third on Arizona’s career list with 321 points. … Panthers D Keith Yandle played in his 777th straight game to pass Craig Ramsay for the fifth-longest streak in NHL history. … Coyotes C Christian Dvorak played his first game of the season after being sidelined with an upper-body injury and a torn pectoral muscle.