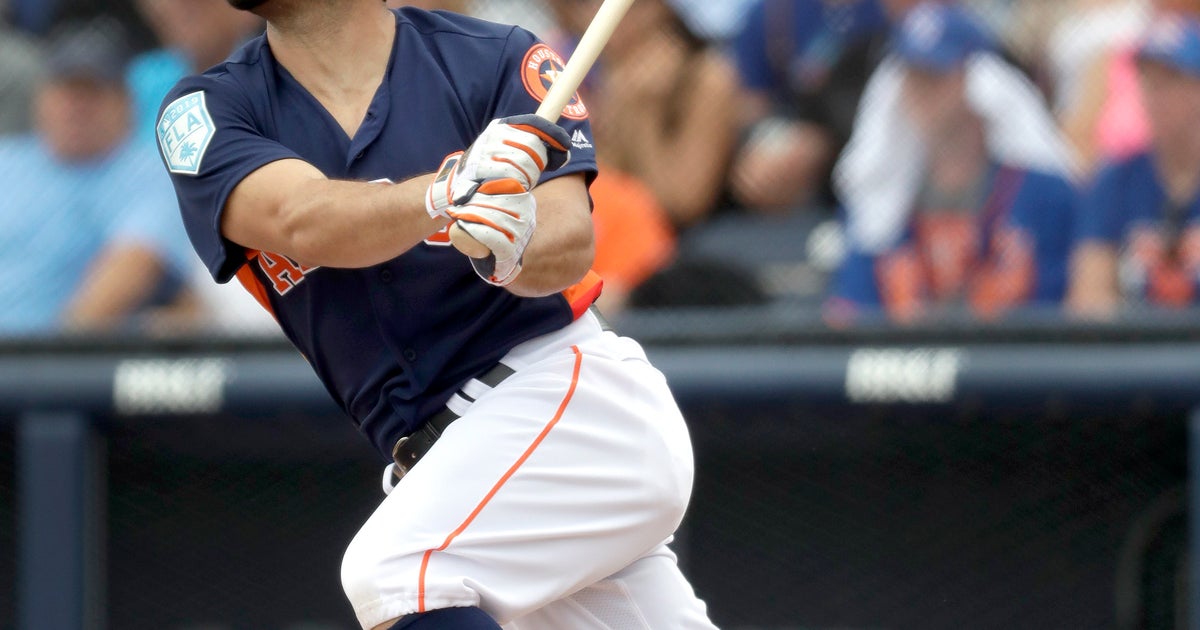 WEST PALM BEACH, Fla. (AP) — Jose Altuve struck out three times in his second game since offseason knee surgery and will return to second base for the Houston Astros on Saturday.

Altuve had surgery just after last season ended to repair a broken right kneecap and had two plate appearances in his spring training debut on Monday. Despite Altuve’s 0-for-3 afternoon, Astros manager AJ Hinch was encouraged by Altuve’s performance in Houston’s 7-5 win over the Miami Marlins on Thursday.

“He wasn’t too far off,” Hinch said. “It’s very rare for him to swing and miss on the strike threes. But he’s in a really good place physically and even timing-wise, right on time.”

The 2017 American League MVP and six-time All-Star will play the field for the first time this year when the Astros visit the New York Mets in Port St. Lucie.

“I have no concerns with him, it’s just a matter of repetition,” Hinch said. “It’s the first time post-surgery but I’m not apprehensive about putting him out there … based on how he’s worked on the back fields with the defensive work we’ve done he’s more than ready.”

All-Star third baseman Alex Bregman will play for the first time this year on Saturday, starting at third. Bregman was limited after minor elbow surgery in January.

Hinch is also encouraged by the progress of shortstop Carlos Correa, who is looking to bounce back after an ailing back led to a tough 2018. The 2015 AL Rookie of the Year got his first hit of spring training on Thursday on an RBI double in the first inning.

“Both swings were really good and more so because his body was under control, it was in a good posture,” Hinch said.

This veteran team has very few questions to answer this spring, but is working to determine who will be the fifth starter, behind Justin Verlander, Gerrit Cole, Wade Miley and Collin McHugh. On Thursday they got a look at one of the players vying for the position when Brad Peacock made his first start.

The 31-year-old struck out two in two perfect innings, making a good early impression as he looks to outdo rookie Framber Valdez and return to the rotation after pitching almost exclusively in relief last season.

Hinch said the performance was “exactly” what the team wanted to see. And though the easygoing Peacock insists he’ll be ready for whatever role he gets, he admitted that he does prefer being in the rotation.

“I do like starting,” he said. “I did it my whole career pretty much and I’m just more comfortable starting. So we’ll see. I love the bullpen, too.”