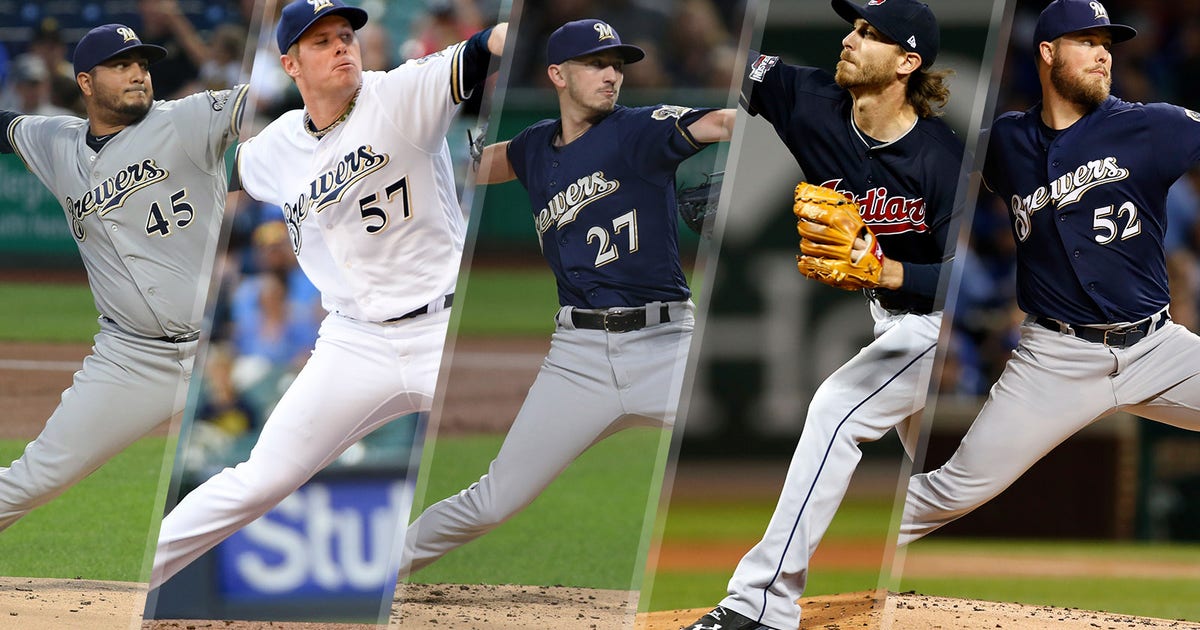 You can enter Jhoulys Chacin as a member of the Milwaukee Brewers’ starting rotation in 2019.

Now put down that marker.

On Thursday, both general manager David Stearns and manager Craig Counsell indicated that Chacin is the only one currently guaranteed a starting spot. The other four spots are being contested by seven pitchers.

Junior Guerra, who made 60 starts over the past three years for the Brewers, is not in that group. He’s ticketed for the bullpen, although that could change depending on the health and status of the other seven.

Don’t count on Josh Hader, either. Counsell ruled that out for this year, but left the door open in the future (although more in a quasi-starter, multiple out-getter role, pitching with rest type of role).

As for some other guys down the depth chart, Adrian Houser will have to make it as a reliever if he’s on the Brewers (he could be stretched out as a starter in the minors, though) and non-roster invite Burch Smith is in a similar spot — he needs to make Milwaukee as a reliever but could start if he heads to Triple-A.

In alphabetical order, here’s a rundown of the seven contenders (note: all are right-handers and, according to Spotrac, all have minor-league options remaining):

“He got into a point where he was very synced-in with his delivery in 2017. He never quite got locked in as he wanted to be in 2018,” Counsell said. “When Chase’s delivery has really clicked and is really on, that’s where we got a little more velocity from him in ’17. That’s what we’re trying to get back to … what he’s trying to capture.”

Early in spring training, Anderson has pitched three innings allowing four hits — three of those home runs — with no walks and two strikeouts.

Solid if unspectacular in his first two-plus seasons with the Brewers — a 3.91 ERA over 67 starts — injuries sidetracked Davies in 2018. He made only 13 starts and finished with a 4.77 ERA.

Said Counsell: “Look, he had a tough season last year. From his perspective, he couldn’t get on track health-wise and have a big enough sample of us to evaluate. There’s nothing you can do about it now, and I don’t think it changes this spring for him. We have competition in our starting rotation and he’s part of that. That puts it in a little different place than in previous springs, but that’s part of him being hurt and part of the bar being raised and other guys ready to contribute. Zack’s experience, he is definitely farther along in this thing than some of other guys are.”

Things have started well for Davies this spring as he’s tossed three hitless innings in his first two appearances.

Nelson is still waiting to take the mound in spring training and tweaking his forearm while throwing. He did throw again Tuesday and play catch Wednesday and Thursday. Nelson could pitch this weekend.

Tomlin has perhaps the toughest path. He’s coming off a poor season and is in camp as a non-roster invite.

He signed with Milwaukee in part due to bullpen coach Steve Karsay, who like Tomlin comes to the Brewers from Cleveland’s organization, and “a good chance of winning the World Series.”

“Josh overall big picture he’s probably relying on other circumstances. And there’s always the you pitch so good that it kind of forces our hand and we’re certainly open to that, too. … He’s going to have to be sharp and get outs.”

In two spring appearances, Tomlin has allowed one run on two hits in three innings, with (of course) no walks and two strikeouts.

We group Corbin Burnes, Freddy Peralta and Brandon Woodruff together because Counsell does. “Right now I see them together. It’s hard to separate them,” he said.

Counsell noted that all three pitched in the big leagues and had success, both in the regular season and postseason.

“All young pitchers go through that,” Counsell said of the fatigue. “I think it showed up how hard he worked this winter. He worked hard in his conditioning and strength; it’s really obvious.”

Said Peralta: “I know I have to fight for a five-rotation spot, but I feel really good because I know last season I pitched up in the majors. …  I feel confident. When you pitch in the playoff games … how you have to play in the playoffs, how you have to pitch, you see the game is not easy, but you can control the game.”

Woodruff was used extensively in the postseason last year. He started and tossed three scoreless innings against Colorado in the NLDS and appeared in three games in the NLCS vs. Los Angeles, allowing three runs in 9 1/3 innings, allowing seven hits and two walks while striking out 17.

Thursday was also Woodruff’s spring debut, although against Cincinnati. He walked three but did not allow a run in one inning.

Burnes was a starter in the minor leagues but moved to the bullpen last year to help out the big-league club. It paid off as he finished with a 2.61 ERA, 1.000 WHIP and 8.3 K/9 over 38 innings with Milwaukee. He pitched nine innings in the postseason, allowing two runs while whiffing 11.

But now he’s Burnes is being stretched out to be a starter again. He has tossed one scoreless inning this spring, giving up one hit and is scheduled to pitch two innings Friday.

“That’s the question we have to answer,” Counsell said when asked about Burnes becoming a starter again.

It’s not the only thing Counsell will have to decide this spring when it comes to Milwaukee’s starting rotation.