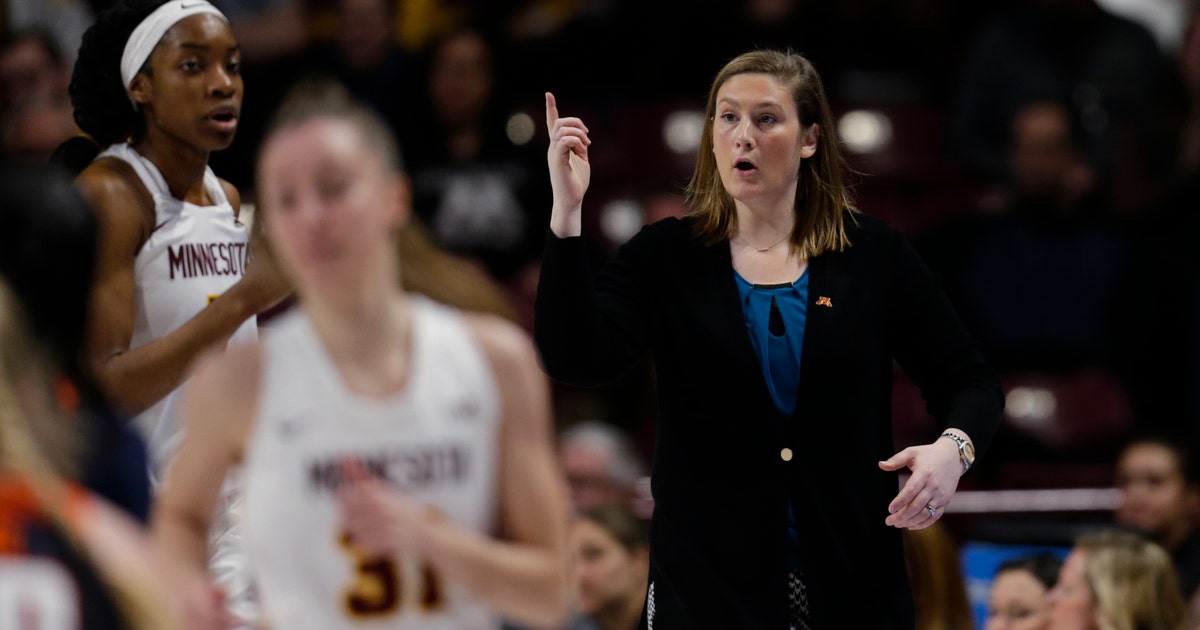 PISCATAWAY, N.J. (AP) — It has been a learning process for Lindsay Whalen in her first year as coach of Minnesota.

On and off the court, the rookie coach has been finding her way with a bit of help.

“Practice and things like that, you can figure out what you like and how you want to run things,” Whalen said. “You always have to be thinking one more step ahead as a coach. You have to be prepared to answer any question at any time. You have to always be on. Speaking, recruiting, meetings, things like that have been learning and adjustments for me.”

Whalen’s team got off to a perfect start, winning all 11 non-conference games and earning a Top 25 ranking. The Gophers were in the poll for 10 weeks, reaching as high as 12th. Then, Big Ten play set in and the Golden Gophers struggled, losing seven of their first nine games in the conference.

Losing games helped give Whalen a better perspective of what it took to coach.

“I’ve been a teammate my whole life and always wanted to make sure the players were feeling good,” said Whalen, who starred at Minnesota before having a stellar WNBA career. “As a coach, I learned how to be more direct and not always worry about everybody’s feelings. At the end of the day, some people will be mad at me, but we’re a family so you move on.”

As the team struggled, Whalen felt she needed to connect with her players better so she picked up a book to read — “Not Everyone Gets a Trophy: How to Manage Generation Y” by Bruce Tulgan — at the advice of former college coaches Gail Goestenkors and Carol Ross. The pair was hired before the season as consultants for Whalen and her staff.

Whalen joked that she picked up the audio book version as she hates to sit and read. The coach made a few small changes at practice, such as putting in a shooting challenge, and the team responded by winning six straight conference games.

“There’s a lot of talent on this team, but you also have to have those relationships and form those bonds with the players,” Whalen said. “I was struggling with that from the start.”

Whalen credits Goestenkors and Ross for being very helpful to her throughout the year.

“Sometimes they just lend a sympathetic ear, or just send a friendly text,” Whalen said. “They are two of the best in the game ever and it’s great to have them available.”

Ross and Goestenkors watch every game and take notes and send them to Whalen. They’ve been on campus a few times as well.

“We want to give Lindsay what we would want if it was in reverse,” Ross said. “This can be a tough business at times. It can be a rollercoaster in conference play. We just are trying to be encouraging. Things we see that might be helpful we can point those out. We work for Lindsay. Try to offer her what she needs. We put stuff out there. She can take it or leave it. She’s very fun to work with because she’s hungry.”

The winning streak ended with a tough loss at Maryland last week. The Gophers had a 16-point lead in the third quarter and lost at the buzzer to then-No. 8 Terrapins. The Gophers (19-9) lost another tough one Thursday to Rutgers when they blew another second-half lead. That bumped them down to 10th in the conference standings with one regular-season game left to play.

“I think our expectations got ramped up in the non-conference,” Whalen said. “We hung in there. We wanted to make the NCAA Tournament. That’s been a goal. We still have some work to do.”

Star guard Kenisha Bell has been happy to have Whalen as her coach.

“It’s been pretty fun. She knows our playing style and what we like to do,” Bell said. “She’s been helping us get to where we want to be.”

Bell recalled how shocked the team was when Whalen was introduced as the coach.

“She’s been there and she knows what it takes to get to the NCAA Tournament and Final Four. Great to have someone with experience come in and be able to coach us and do the things she did in the past.”

Minnesota will most likely need to put together a run in the Big Ten Tournament to reach the NCAAs. Whalen isn’t concerned.

“I’ll give us a shot in every game every night,” she said. “A month ago, we were struggling and not playing well. As long as we come out with that energy we’ve had lately we have a chance in every game.”