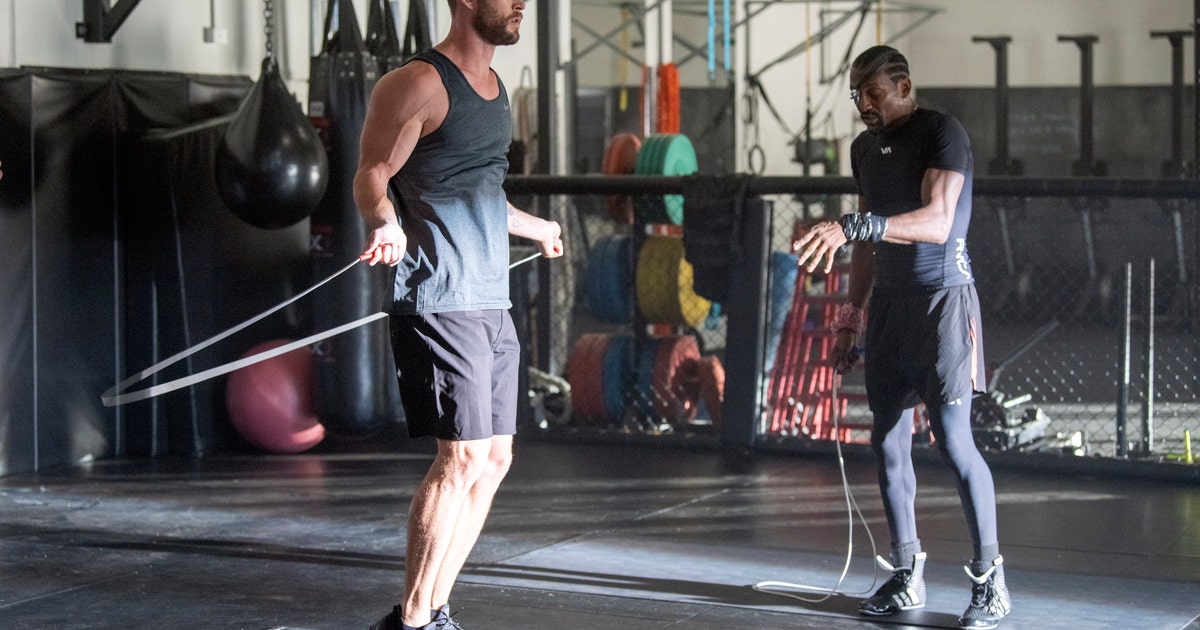 NEW YORK (AP) — When actor Chris Hemsworth sought “experts” to contribute to a fitness and health app called Centr, one place he turned was to the boxing ring.

He found Michael Olajide Jr., a former middleweight contender who literally lost an eye to his sport.

Olajide, once a loser by decision to Thomas Hearns in a title fight, developed a series of aerobic workouts built around the sweet science, and turned that into a second career. He has worked with athletes, actors, singers, artists, super models and, well, anyone interested in using boxing to get fit.

Or in Hemsworth’s case, to stay fit.

“For me, one of the best ways to stay motivated or engaged in any physical workout is variety, and this is where Michael excels,” Hemsworth said. “His workouts are constantly evolving in new and creative ways that always keep you invested, pushing not only your physical speed and endurance but agility, too. One of the best full body, functional workouts you can have.”

Olajide, who wears a silver-colored metallic eye patch and looks like he could go 12 rounds with Canelo Alvarez right now, says the benefits of boxing workouts can be felt by anyone — especially when they aren’t feeling the sting of leather from an opponent. He calls it “getting fit without getting hit.”

“The movements and the balance and the cardio, it works for anybody, inside the ring or outside of it,” he says. “It’s really natural movement, side to side, front and back. But the difference with boxing is while most workouts the fitness is based with the legs and the movement of the legs, boxing also has the upper body part. And you set the pace with your hands, not your feet.”

Olajide then crouches and displays the quick hands and smooth arm movements that every boxer must possess; he was nicknamed “Silk” when he fought, after all. He emphasizes that making contact doesn’t matter for his regimen, then puts a class filled with twentysomethings through a non-contact workout that is exhausting to watch, let alone participate in.

He receives a strong round of applause when they finish, then Olajide walks over to each member of the group to thank them. Nearly all of them were embracing a semblance of boxing for the first time.

While the vast majority of Olajide’s students aren’t built like a competitive boxer — and certainly not like the 6-foot-3, 220-pound Hemsworth — and never will get into the ring, Olajide isn’t looking for the next Canelo. Having worked with famous folks such as Hugh Jackman, James Taylor, Eva Mendes, Will Smith and Liev Schreiber, all with different body types at divergent ages, he feels comfortable training pretty much anyone.

He still has some regrets about his pre-empted career, in which he was 28-4 with 20 knockouts before the right eye was damaged while sparring.

“I always thought I could win a world title and it was something I dreamed of,” he says. “But I didn’t, and that I have been able to use boxing in this way, to train people for cardiovascular endurance that serves them well throughout (their lives), it’s rewarding. I have sort of taken boxing into another world, you might say.”