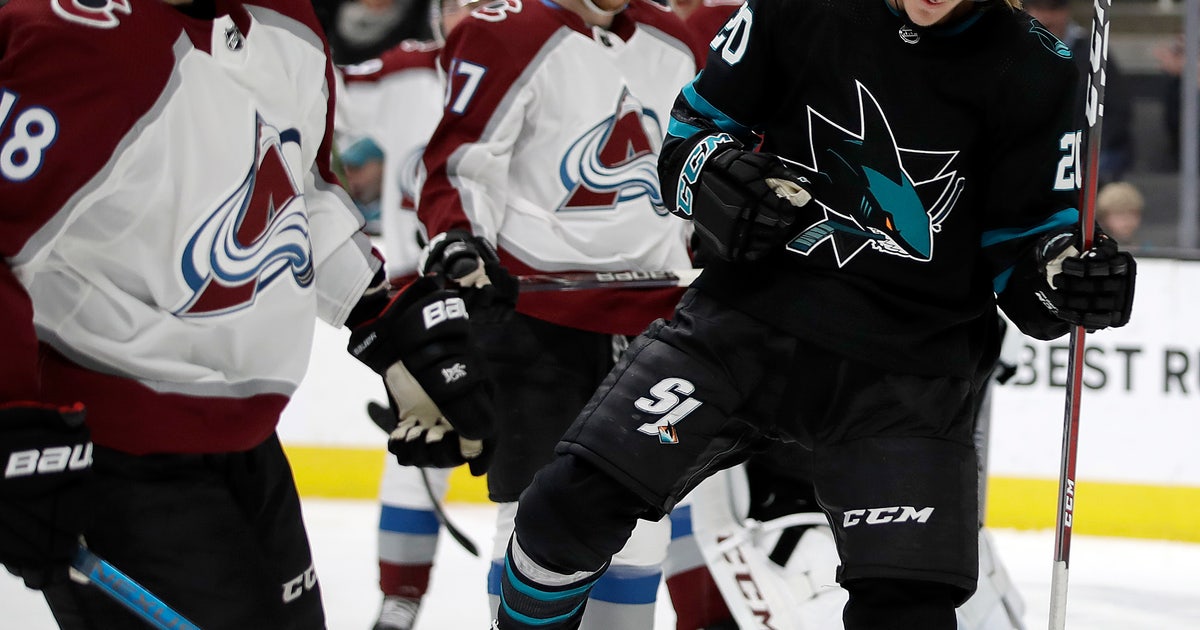 SAN JOSE, Calif. (AP) — Marcus Sorensen still has the stitches on his upper lip from taking a puck the face that sidelined him for two games. That injury didn’t slow him down a bit in his return to the lineup.

Sorensen had his first career two-goal game and Joe Pavelski added his 36th goal of the season to lead the San Jose Sharks to a 4-3 victory over the Colorado Avalanche on Friday night.

“l played with good players. They do plays that make me better, so it’s easy for me to come out there,” Sorensen said. “It’s good to be back. It’s no fun to be watching.”

Sorensen missed the final two games of San Jose’s road trip after taking a puck to the face last Saturday at Columbus, but thrived on a line with newly acquired Gustav Nyquist and Joe Thornton for his first multigoal game of his career. He opened the scoring early in the first and added another in the closing minute of the second period.

Sorensen played just sparingly in the NHL his first two years since coming over in Sweden, but has earned a regular spot this year as a key contributor for the Sharks.

“He’s just gotten better and better,” coach Peter DeBoer said. “I think his development obviously from coming over here and playing in the American League to getting on the fourth line a couple years ago in the playoffs and playing an energy role. This year, you can’t (overstate) how important Joe Thornton has been to his development offensively. He’s always talking to him about hanging on to pucks and making plays. When you get a guy like that, that wants to play with you, that’s the golden ticket.”

Timo Meier also scored and Martin Jones made 24 saves for the Sharks, who began a stretch of 12 home games in the final 18 regular contests on a winning note.

Nikita Zadorov, Mikko Rantanen and Samuel Girard scored for the Avalanche, who had their six-game point streak snapped. Gabriel Landeskog added three assists as Colorado lost for the 17th time in the past 18 regular-season games in San Jose.

Colorado missed a chance to move into the wild-card lead in the Western Conference. The Avalanche are tied with Dallas and Minnesota for the final two playoff spots in the conference, but have played one more game than those teams.

The Sharks took control with a dominant stretch late in the second period that led to Sorensen’s second goal. They pinned Colorado into the defensive zone, preventing defensive pair Erik Johnson and Girard from getting off the ice for 3:27. The duo was gassed when Sorensen got position in front of the net to tap in a loose puck past Semyon Varlamov that gave San Jose a 3-1 lead.

“That’s not easy,” Girard said. “We have to find a way to make changes in those shifts, but shifts like that are part of the game now. It’s very tough to be on the ice for 3½ minutes.”

Rantanen scored on the power play midway through the third to make it a one-goal game, but Pavelski answered on a power play for San Jose shortly after that to restore the two-goal margin.

Girard then scored with 6:33 remaining, but Colorado couldn’t get the equalizer.

“We needed to start the game with a chip on our shoulder. And we didn’t have it,” Rantanen said. “We found it in the third. In the third, we had urgency. If we had that in the first two, it might have been a different game.”

The Sharks took the lead less than five minutes into the game when Thornton won an offensive zone draw and Burns fed Sorensen in front of the net for the goal.

San Jose added to that lead early in the second when Meier beat Varlamov from the top of the circle on a rush.

But Colorado answered quickly after that with Zadorov’s shot through a screen from the point.

NOTES: Rantanen has points in six straight games. … The Sharks were without two key players with D Erik Karlsson again sidelined by a groin injury he re-injured Tuesday in Boston and F Evander Kane out with an undisclosed injury sustained in that game. … Colorado D Ian Cole returned to the lineup after missing 11 games with a broken orbital bone around his left eye.