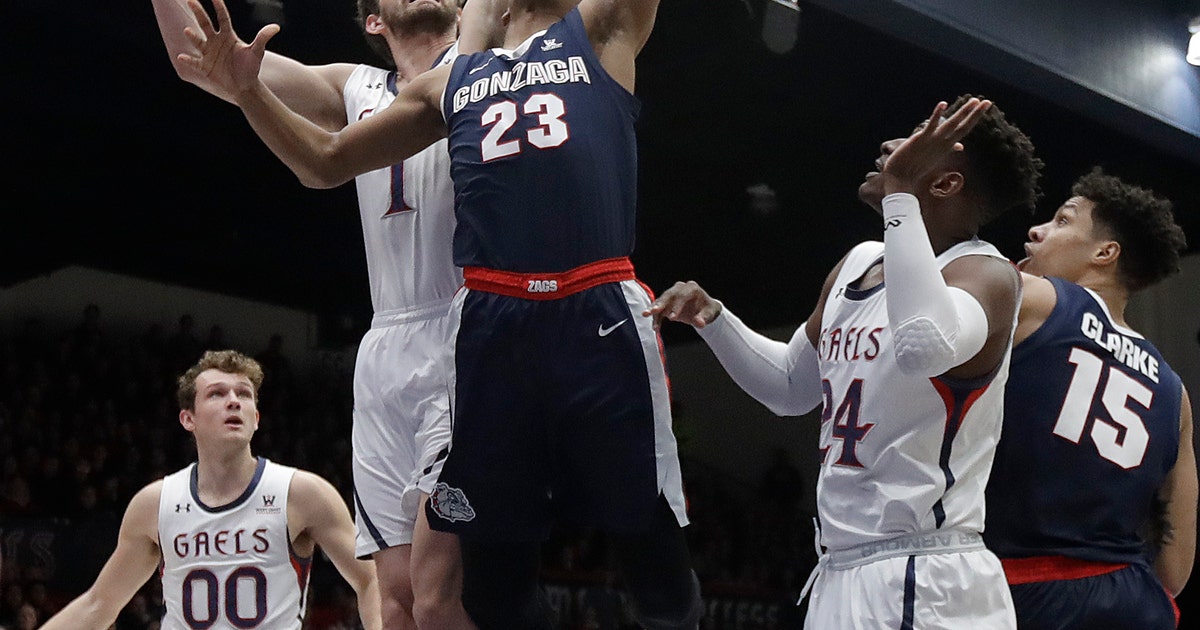 Gonzaga moved back atop the AP Top 25 this week. Wins over Pacific and Saint Mary’s took the Bulldogs a step closer to a No. 1 seed in the NCAA Tournament.

Still playing without one of its best players, No. 1 Gonzaga capped off a perfect run through the West Coast Conference and extended the nation’s longest winning streak to 20 games with a 69-55 victory over Saint Mary’s on Saturday night.

The Zags (29-2, 16-0 WCC) set a conference record by winning by an average of 27 points and earned the No. 1 seed in this week’s WCC tournament in Las Vegas. Win a seventh straight title there, Gonzaga could be looking at the No. 1 overall seed in the NCAA Tournament.

“They’re a very good team, very good,” Saint Mary’s coach Randy Bennett said. “One of the best teams that I’ve coached against for sure. I can’t remember one better unless it was Gonzaga two years ago. They are very good.”

This year’s team could be more talented.

Rui Hashimura has become an All-America candidate. Brandon Clarke is one of the nation’s most athletic big men and shot blockers. Josh Perkins is steady and heady at point guard. Zach Norvell Jr. can score in bunches.

And the Zags are doing it despite forward Killian Tillie playing just nine games due to foot injuries.

Get Tillie back for the NCAA Tournament and Gonzaga will be tough to beat.

Duke was the No. 1 team in the country with Zion Williamson in the lineup.

The Blue Devils haven’t been quite as good since the high-flying freshman blew out his shoe and tweaked his knee.

Williamson has missed the past three games since his shoe gave way and he sprained his right knee against rival North Carolina.

Duke (25-4, 13-3 ACC) lost to the Tar Heels after Williamson went down and then beat Syracuse before losing to No. 20 Virginia Tech. The Blue Devils bounced back with an 87-57 win over Miami on Saturday night behind RJ Barrett’s 19 points and 10 rebounds.

Duke coach Mike Krzyzewski said Williamson, who is second in the ACC with 21.6 points per game, will not be rushed back to the court.

Tennessee was slated as one of four No. 1 seeds in the NCAA selection committee’s initial rankings.

The Vols likely fell off the 1 line with losses to then-No. 5 Kentucky and No. 13 LSU, but could be inching back.

Tennessee escaped with a two-point win over Ole Miss on Wednesday and blew out Kentucky 71-52 in a rematch on Saturday.

The Vols (26-3, 14-2) are tied atop the Southeastern Conference with LSU heading into the final week of the regular season.

Utah State improved its resume with an 81-76 win over No. 12 Nevada on Saturday night that gave the Aggies the Mountain West Conference lead.

Pandemonium broke out in the hallways after Utah State students stormed the court and left Nevada’s Jordan Caroline noticeably upset.

Caroline broke glass when he punched a fire extinguisher case and members of the Wolf Pack contingent could be heard yelling expletives in the tunnel, some at police officers for not protecting the players better.

If the teams meet in the Mountain West Conference Tournament in Las Vegas in a week, be sure to find a TV.

Central Florida got a big boost to its NCAA Tournament hopes and ended the nation’s longest home winning streak with a 69-64 win over Houston on Saturday.

The Knights (22-6, 12-4 AAC) needed a resume-boosting win and got it by ending Houston’s 33-game home winning streak.

The North Carolina coach has struggled with vertigo and fell in front of his team’s bench a minute before halftime of Saturday’s game against Clemson. He was helped to the locker room and did not return, but appeared to be fine after the game.

The fifth-ranked Tar Heels won the game 81-79 to remain tied with No. 2 Virginia atop the ACC.