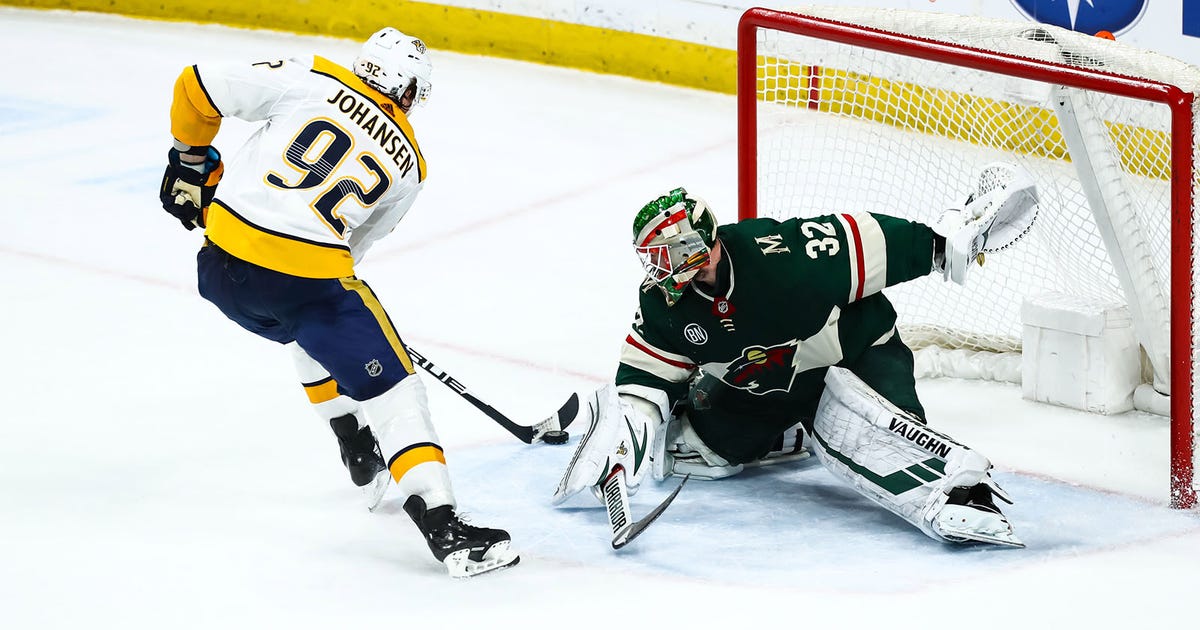 ST. PAUL, Minn. — Ryan Johansen scored in the fourth round of the shootout on Sunday night to give the Nashville Predators a 3-2 victory over Minnesota and stop the Wild‘s winning streak at five games.

Filip Forsberg had the tying goal with 4:19 remaining in regulation and backup goalie Juuse Saros won for the first time in four starts for the Predators, who outshot the Wild 17-3 after the second intermission.

Eric Fehr and Jason Zucker scored late in the second period less than 3 minutes apart for the Wild, who still moved into a tie with Dallas for the first wild-card spot in the Western Conference with 71 points. The Stars have played one fewer game.

Nick Bonino‘s goal early in the first period gave an early lift to the Predators, who are just 5-6-1 in their last 12 games and lost 5-3 to Central Division leader Winnipeg on Friday. The Jets have 82 points in 65 games, and the Predators have 81 points in 68 games.

Wayne Simmonds posted his first point for the Predators when the rebound of his shot slid to the right skate of Bonino, who slid the puck over and knocked it in for his first goal in 16 games since Jan. 23.

The Wild, who beat Pacific Division leader Calgary 4-2 on the road on Saturday night, picked up the pace after a sluggish start. Fehr scored on a breakaway with 3:25 remaining before the second intermission after blocking Rocco Grimaldi‘s shot. Then Zucker, with 38 seconds left, deposited his third goal in the last four games.

Backup goalie Alex Stalock made 41 saves, after allowing 11 goals on 69 shots over his three previous starts, all losses. That included an early hook against Anaheim on Jan. 17, when he gave up three goals in 7:58.

Stalock couldn’t quite push the Wild over the top, though. He saved a slap shot by Kyle Turris, but couldn’t keep it away from Forsberg, who tapped in his 22nd goal of the season to tie the game. Then in the shootout, Johansen slowed in front of the crease and used a rope-a-dope move to sneak the puck in with a backhander after faking to his right.

The Wild get an immediate rematch with the Wild in Nashville on Tuesday.

Six days after he was traded to the Predators for fellow wing Kevin Fiala, Mikael Granlund faced his former team and was honored during a first-period break with a tribute video and an extended cheer from the crowd.

There could hardly have been a player on the ice with more emotion for this game than Granlund, the slick stick-handler and special-teams standout who was informed of the deal by Wild general manager Paul Fenton after his fiancée had started labor. Granlund turned 27 and became a father the following day. He debuted with his new team with one assist at Winnipeg on Friday.

Predators general manager David Poile, who was Fenton’s boss until his hiring by the Wild last spring, seized an opportunity to try to upgrade the second line and the power play by parting with an underperforming forward of his own in Fiala, the 11th overall pick in the 2014 draft who had a breakout at age 21 last season with 23 goals, 25 assists and a plus-20 rating.

After reaching the Stanley Cup finals two years ago, posting the NHL’s best regular-season record in 2017-18 and starting this season 13-3, the Predators have plateaued. Injuries have been an obvious setback, with first-liners Forsberg and Viktor Arvidsson, Turris and star defenseman P.K. Subban all having missed significant time earlier in the season. So Granlund and Simmonds, the other deadline-day acquisition, have arrived to help spark some more production and perhaps improve the chemistry of a team that has for one reason or another been a little off this season.

Recently retired skier Lindsey Vonn , the all-time women’s leader with 82 World Cup wins who grew up in Minnesota, performed a ceremonial puck drop. Grinning widely as she walked off the ice, Vonn playfully waved her arms at Nashville’s bench where her boyfriend, Subban, was sitting. … Smith returned from a six-game absence due to a lower-body injury. Bonino moved over to center to fill the spot vacated by Brian Boyle, who was out with a lower-body injury. … Eric Staal stretched his season-high points streak to six straight games. … Fiala is the fourth former Predators player acquired for the Wild by Fenton since the season began, joining right wing Pontus Aberg and defensemen Anthony Bitetto and Brad Hunt. Fenton had a big hand in Nashville drafting Aberg, Bitetto and Fiala.

Predators: After returning home to face the Wild again in two nights, they host Carolina on Saturday.

Wild: After the rematch with the Predators, they stay on the road and play at Tampa Bay on Thursday.