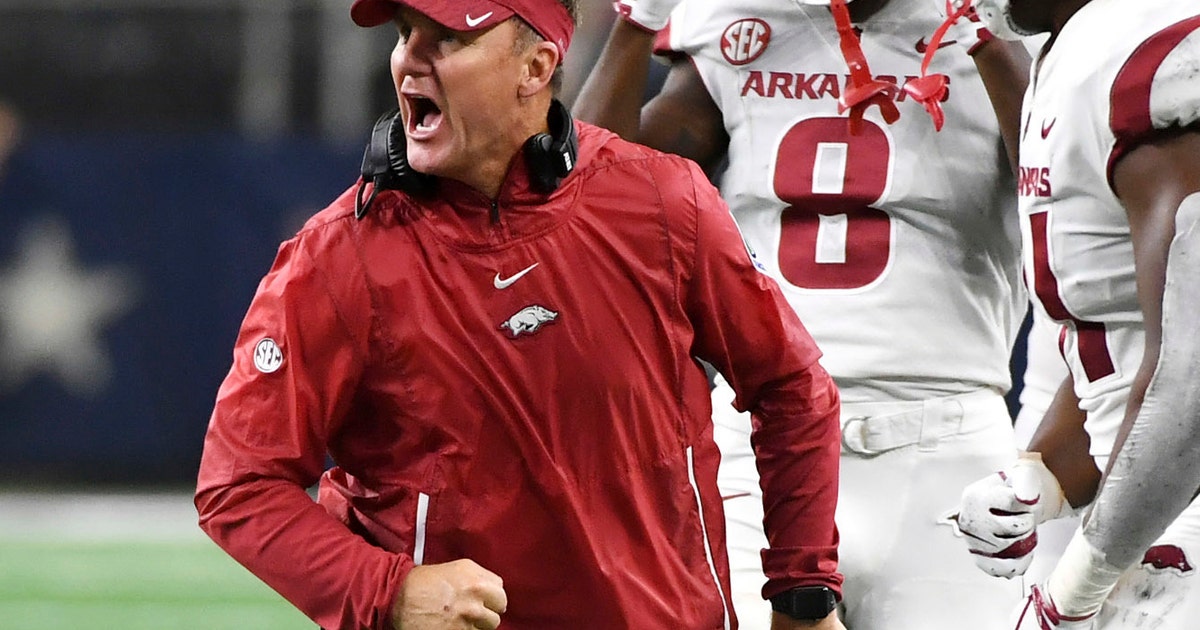 FAYETTEVILLE, Ark. (AP) — After a 2-10 season, Arkansas has opened spring practice with a mantra that is as much physical as it is metaphorical: “Earn everything.”

Coach Chad Morris will go into his second year with the Razorbacks insisting that every member of the team from the quarterback to the equipment staff gives their best.

“There was one thing that we wanted to come out of spring with, and that is we want to become more fundamentally sound in all three phases: offense, defense and special teams,” Morris said.

In a literal sense, “earn everything” refers to Morris’ refusal to allow players and staff to wear official Razorback gear and equipment until they earn it. Players must tally enough points in a system Morris devised. He said the results have been encouraging.

“To see guys like (defensive back) Kam Curl and (linebacker De’Jon Harris) tweeting out, ‘Hey, make sure everybody comes to breakfast because we get points, and those points will earn us gear back’. that accountability encompasses the earn everything mentality,” Morris said.

Arkansas was among the worst teams in the Southeastern Conference in many categories last year, but Morris is among those expecting improvement this fall. The season opener is Aug. 31 against Portland State.

“It’s time to take the next step,” Morris said. “Year one, you teach the culture, and you spend a lot of time teaching the culture. Year two, you start the transformation into how to live the culture and to make it a habit.”

Daulton Hyatt played in one game last season and John Stephen Jones also suited up in a few, but the presumed frontrunner for the starting job is Ben Hicks, who transferred to Arkansas from SMU, completing the same journey Morris made prior to last season. Hicks threw for 9,081 yards in a three-year career for the Mustangs; in 2017, he threw for 3,569 yards and 33 touchdowns.

Connor Noland, who started in the team’s second and final victory last season, is poised to participate in spring practices despite also being a starting pitcher on the powerhouse Arkansas baseball team. And just this week, the Razorbacks welcomed transfer Nick Starkel from Texas A&M. He is expected to graduate in May and should have two years of eligibility.

“We haven’t even scripted that and haven’t even started that,” Morris said about his potential starting quarterback. “I really couldn’t tell you right now, I don’t know. We’ll get into that.”

The defense showed glimpses of promise last season under first-year coordinator John Chavis. Linebackers Dre Greenlaw and Harris were among the top duos in the nation, combining for 100 tackles.

Greenlaw’s graduation is a blow, but Harris is back after finishing last season as the third-leading tackler in the SEC. He is expected to be joined by sophomore Bumper Pool on the starting depth chart. The secondary was suspect last season, at best, but it was also young. Two of the most experienced defensive backs this spring are Curl and Jarques McClellion.

IN WITH THE NEW

Some highly acclaimed signees joined the program early, including Hicks. Eleven in all will part in spring drills ahead of their first season at Arkansas; six are rated as four-star prospects by some recruiting sites.

Devin Bush, Gregory Brooks Jr. and Trey Knox are three players to watch, and Bush could be in line to receive significant playing time at cornerback with the departure of standout Ryan Pulley. There is also much attention on the offensive line, which struggled last season. Shane Clenin and Colton Jackson impressed in winter practices.

“I think we’ve had one week since we’ve been here where we had 10 offensive linemen at practice that were on scholarship,” Morris said of his lack of depth. “To know that we’ve got an opportunity to promote and demote on the spot, from an offensive line standpoint, will help us. It creates competition, which is what we have to have.”

The Razorbacks punted 67 times last season, but averaged only 37.9 yards — third-worst in the SEC — as they tried three different players doing the job. Barry Lunney Jr. was promoted from tight ends coach to special teams coordinator to help lead a turnaround.

“We’ve got to create a positive culture for being on special teams,” Morris said. “That’s something that’s got to be installed from me down, and I’m excited about that.”