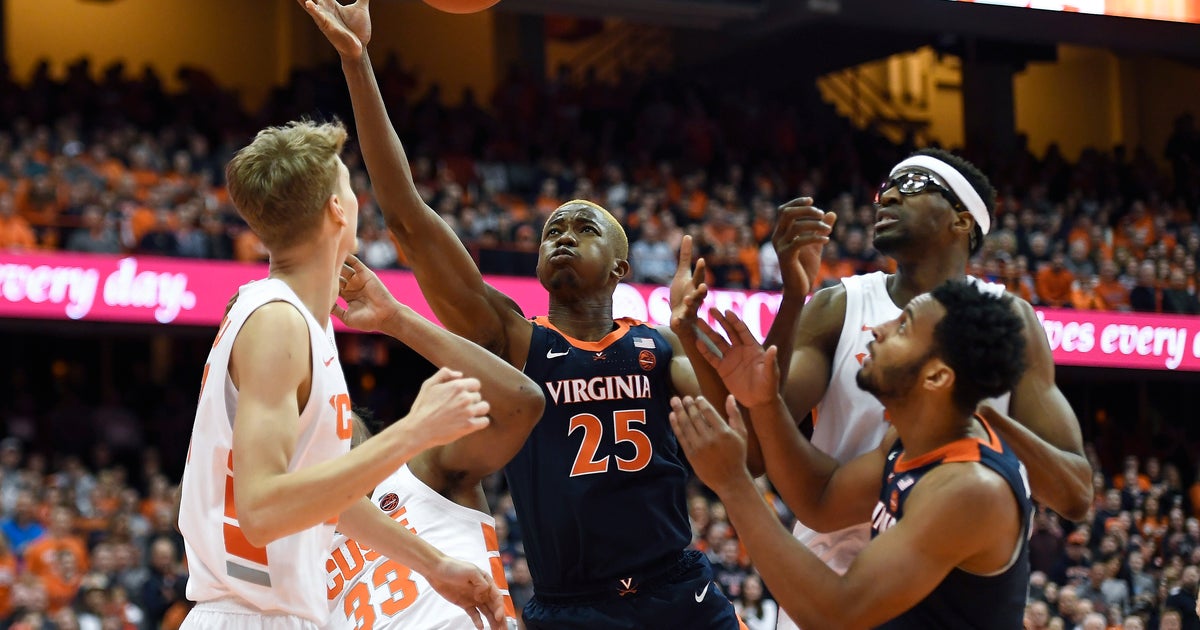 SYRACUSE, N.Y. (AP) — Kyle Guy, Ty Jerome and De’Andre Hunter led a long-range assault, combining for 18 3-pointers as No.2 Virginia broke open a tight game in the second half and cruised to a 79-53 victory over Syracuse on Monday night.

Virginia (27-2, 15-2 Atlantic Coast Conference), whose only two losses were to Duke, has won seven straight since losing for the second time to the Blue Devils and leads North Carolina by a half game in the ACC.

Syracuse (19-11, 10-7) was coming off a solid road win at Wake Forest, but the Orange’s vaunted zone defense was torched for eight 3-pointers during a 27-3 spurt. After falling behind by one point, the Cavaliers outscored Syracuse 37-10 over the final 15 minutes and set a record for 3-pointers allowed by the Orange.

Just over a year ago, Hunter scored 15 points and Guy added 14 as then-No. 2 Virginia humbled the Orange 59-44, the fewest points Syracuse has scored in the Carrier Dome. This one was tight until the big barrage.

Virginia’s biggest lead in the first 25 minutes was four points, but after Tyus Battle hit a corner 3 to give Syracuse a one-point lead at 15:05, the Cavaliers defense kicked in as they scored 11 straight points to gain a double-digit advantage and pulled away.

Hunter hit a 3 from the left corner, Mamadi Diakite converted a layup and Jerome hit a long 3 from the top of the key for a 50-43 advantage nearing the midpoint of the period. Guy’s fifth 3 of the game made it 53-43 at 10:26 as Syracuse went scoreless for nearly five minutes and hit only 1 of 10 shots as the lead slipped away.

Guy’s eighth 3, a career high, gave Virginia its 17th from beyond the arc, the most ever against the Orange.

The game marked the third time since early February the Cavaliers played on the road on a Monday night after a Saturday home game, and they won the first two in that scenario — 69-61 at No. 5 North Carolina on Feb. 11 and 64-58 at No. 20 Virginia Tech on Feb. 18.

Syracuse’s zone forced eight turnovers in the first half — the Cavaliers average 9.2 a game —and the Orange took a 34-32 lead into the break, despite allowing Virginia to hit 8 of 12 3-pointers. Syracuse had the biggest lead of the period, 31-25 with 3:54 left after Buddy Boeheim hit a 3-pointer off a feed from Oshae Brissett at the top of the key. The score was tied four times and Syracuse held a 12-2 edge in the paint and had nine second-chance points to three for the Cavs. Jerome, Hunter and Guy each had 10 points in the half. Virginia committed only three turnovers in the second half.

Center Paschal Chukwu and point guard Frank Howard and reserves Ky Feldman and Antonio Barandi were honored on senior night before their last game in the Carrier Dome.

Virginia: The Cavaliers are purring and their long-range game is a real equalizer as they seek their second straight ACC title.

Syracuse: Although the Orange lost, they have three wins over ranked teams and should be a lock for a berth in the NCAA Tournament.

Virginia: The Cavaliers host Louisville on Saturday in their regular-season finale.

Syracuse: The Orange finish the regular season at Clemson on Saturday.