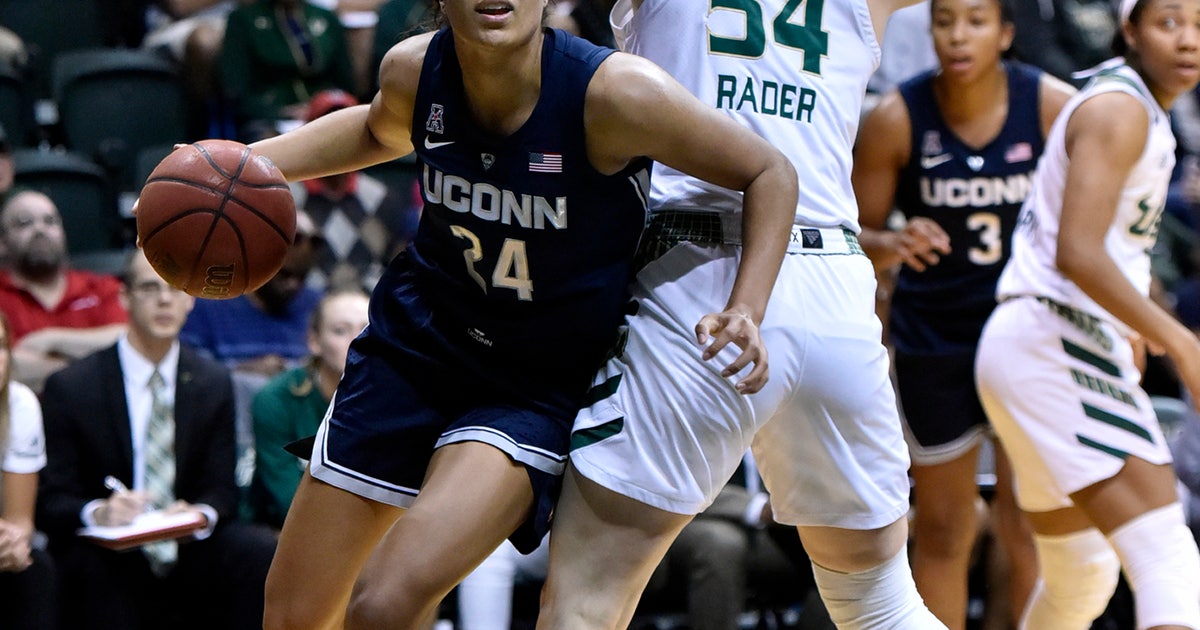 TAMPA, Fla. (AP) — Christyn Williams scored eight of her 10 points in the fourth quarter and second-ranked UConn finished the game on a 9-0 run to pull away to a 57-47 regular season-ending victory over South Florida on Monday night.

The Huskies (28-2, 16-0), playing without injured star Katie Lou Samuelson, completed another perfect run through the American Athletic Conference, improving to 102-0 during the regular season against league opponents since the AAC was formed six seasons ago.

Samuelson did not play after hurting her back during last Saturday’s 83-61 home victory over Houston. She accompanied the team to Florida, however the Huskies announced a little over an hour before the game that the two-time All-American would not be available.

Without Samuelson, UConn struggled offensively, shooting just 32 percent while being held to a season-low 25 points in the opening half. The Huskies trailed at the break, but used their full-court trapping defense to shift the momentum in the second half.

The Huskies forced 17 turnovers and outscored the Bulls 17-2 off miscues.

Enna Pehadzic scored 15 for USF, which did not score in the last 6:04.

UConn: Counting AAC tournament wins, the Huskies are a combined 116-0 against conference foes. But winning their sixth straight league postseason title over the next week isn’t the ultimate goal. It’s to get back to Tampa next month for the Women’s Final Four.

South Florida: Barring an unlikely run to the AAC tournament title, USF’s string of six consecutive 20-win seasons and four straight NCAA tournament appearances will end. The Bulls played most of the season without star Kitija Laksa (knee). Two other players, Beatriz Jordao and Silvia Serrat were lost to season-ending injuries, and senior Laura Ferreira missed 11 of the final 12 games because of illness.

UConn: As the top seed in the AAC tourney, the Huskies won’t play their first game until Saturday’s quarterfinals.

South Florida: The Bulls are the No. 5 seed and play in Friday’s opening round.