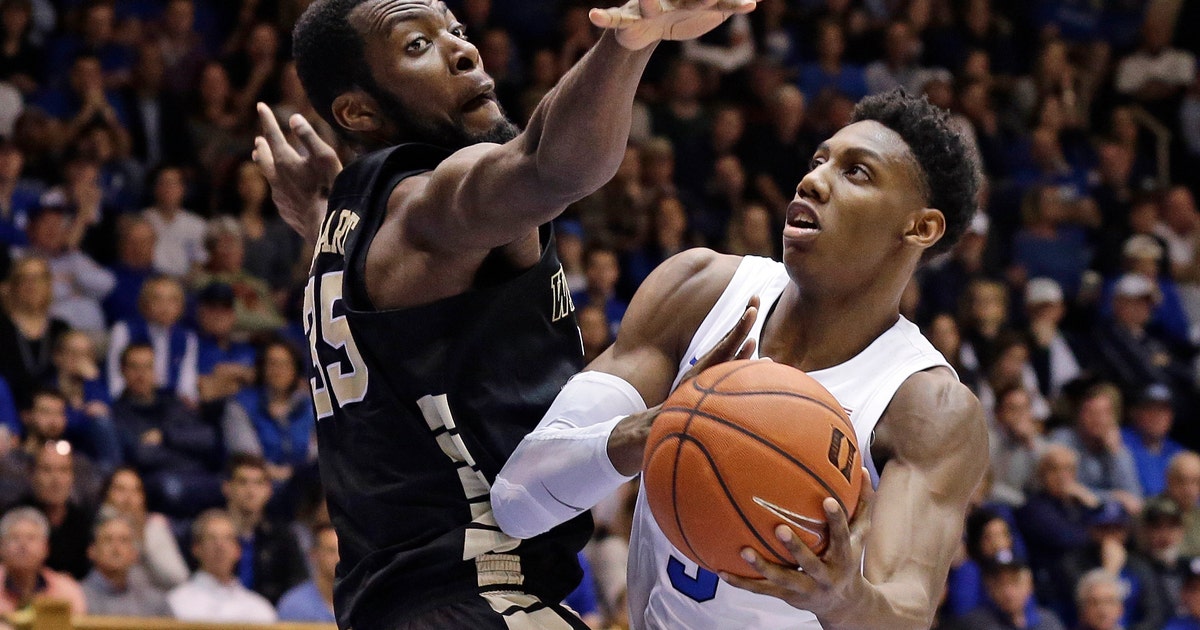 DURHAM, N.C. (AP) — RJ Barrett scored 28 points and No. 4 Duke held on to beat Wake Forest 71-70 on Tuesday night after Chaundee Brown’s jumper rimmed out at the buzzer.

Tre Jones added 13 points for a sluggish Duke team missing star freshman Zion Williamson for a fourth straight game with a sprained right knee. The Blue Devils (26-4, 14-3 Atlantic Coast Conference) overcame 41 percent shooting and a 16-for-26 showing from the free-throw line to win their 10th straight in the in-state series.

The Blue Devils trailed by 10 with 16 minutes remaining and never led by more than three until the final three minutes.

Brown had 21 points and 10 rebounds for Wake Forest (11-18, 4-13), which closed within 69-68 with 43.9 seconds left. Duke bled the shot clock before the left-handed Barrett hit a right-handed jumper in the lane to put the Blue Devils up by three with 17.3 seconds remaining.

Brandon Childress hit a layup with 7.4 seconds left, and Wake Forest had one last chance after Duke turned it over while trying to inbound the ball. Childress missed a 3-pointer with about two seconds left and the rebound went to Brown, whose short jumper spun around the back of the iron before falling out at the horn.

EAST LANSING, Mich. (AP) — Kenny Goins scored 21 of his career-high 24 points in the first half and Matt McQuaid had a career-best 22, leading Michigan State past Nebraska.

TALLAHASSEE, Fla. (AP) — M.J. Walker scored nine of his 11 points after halftime, including a critical 3-pointer in overtime, and Florida State rallied from a 14-point halftime deficit.

Mfiondu Kabengele scored 13 points in the second half and overtime and Florida State improved to 15-1 at home this season and tied the program record with 12 Atlantic Coast Conference wins.

Nick Perkins and CJ Massinburg each chipped in 17 points as the senior-laden Bulls (27-3 overall, 15-2 MAC) won the conference title for the second straight year and tied the school record for wins set last year when the team advanced to the second round of the NCAA Tournament.