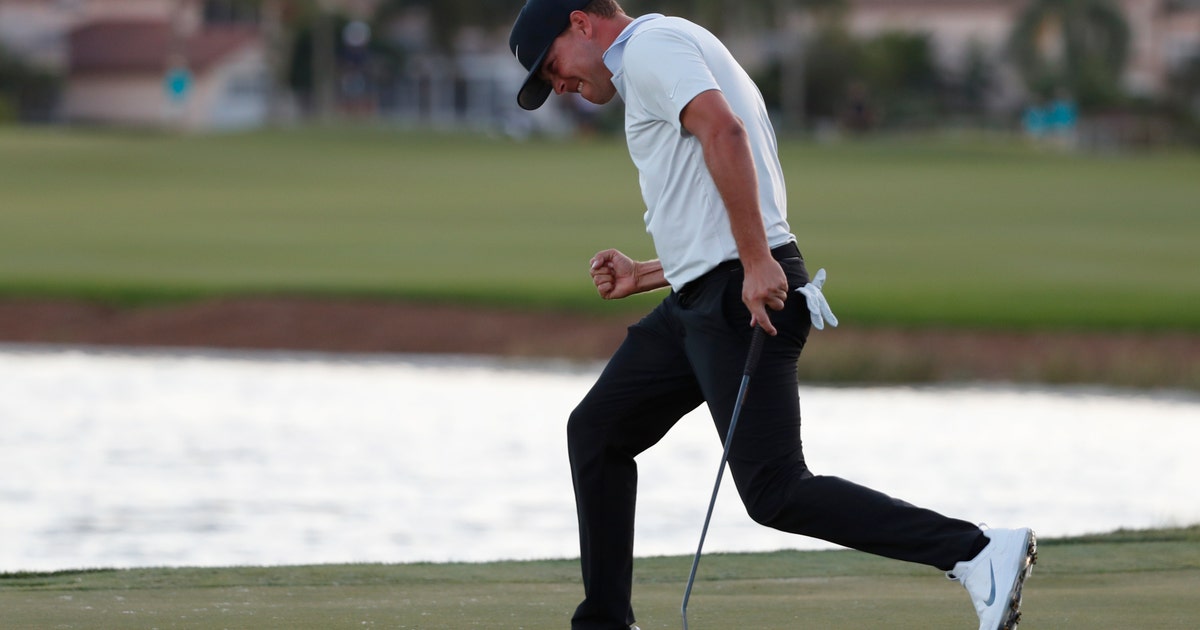 ORLANDO, Fla. (AP) — Two days after his first PGA Tour victory, Keith Mitchell still had not checked his bank account to see if his Honda Classic earnings of more than $1.2 million had cleared. That’s about $400,000 less than when he earned his entire rookie season.

Just don’t expect him to go on any shopping spree.

And to hear Mitchell talk on Tuesday, he is more inclined to spend it on someone else.

Mitchell was asked about the biggest thing he has ever bought for himself since joining the PGA Tour, and he mentioned a watch for his father.

There’s a story behind that.

“When my grandfather passed away, he gave his watch,” Mitchell said. “It was cool because my dad had given my grandfather that watch when he got out of medical school. It was like a ‘thank you’ to him. I felt like me getting on tour was like me graduating med school. So I got him a similar watch — same style, different color.”

What kind of watch?

Mitchell smiled and said, “I’ll leave that out.”

He said his father always figured he would go the education route instead of professional golf, mainly because Mitchell’s father worked hard through medical school and saw what kind of opportunities it provided.

“It was tough for him to grasp the whole golf world, because he played golf for fun,” Mitchell said.

Golf is working out pretty well for Mitchell, who earned a two-year exemption on the PGA Tour along with a spot in the Masters next month, which will be his first major.

And he has a college degree from Georgia.

Mitchell was one semester short when he finished his senior season with the Bulldogs and had thought about turning pro after the NCAA Championship. Instead, he went back and finished up his degree.

“I never wanted to say there’s a Plan B,” he said, referring to his diploma. “If you know there’s a Plan B, you don’t put as much effort on Plan A. It was just two months. I knew if I didn’t do it, I’d look back on it forever. It was two months out of my life at age 22.”

So what does he plan to do with his Honda earnings?

“I always wanted to buy my mom a car,” he said. “She helped me get my first car. But Honda gave me the keys to a new Honda. I might go that route.”

Justin Thomas is the final recipient of the Arnold Palmer Award for winning the PGA Tour money title in 2018, becoming the first player since Tiger Woods (2006-07) to win the money title in consecutive years.

The next winner of the Arnold Palmer Award will be a rookie.

The PGA Tour, which now emphasizes the FedEx Cup, no longer has an award for winning the money title, which dates to 1981. Starting this year, the Arnold Palmer Award will be given to the rookie of the year.

The rookie award dates to Robert Gamez in 1990 and is decided by a vote of PGA Tour players.

Justin Thomas disputed a tweet from the USGA saying that he canceled any scheduled meetings over the modernized Rules of Golf, and the USGA corrected itself Tuesday by saying in another tweet that Thomas did not avoid any discussions or cancel any meetings.

Tyler Dennis, the PGA Tour’s vice president of competition, said plenty of players have tried to get up to speed on the new rules.

“We had five rules workshops in the first five weeks on Tuesday, and we had heavy attendance,” Dennis said. “We had 40 to 50 players and caddies at each one at a minimum.”

The tour also posted one-page memos on some of the more common rules, along with an illustrated poster of those rules in locker rooms. He said the tour’s rules officials produced 15 videos on how to make a drop and take relief, and there has been “a lot of traffic” on a player-only website.

Kurt Kitayama, who grew up in Northern California and played at UNLV, extended a most unusual trend when he won the Oman Open last week.

That gave Americans six victories through 12 events on the European Tour this season.

That includes two by Dustin Johnson, the world’s No. 1 player, who won the Saudi International and the WGC-Mexico Championship. It also includes Bryson DeChambeau, who won the Dubai Desert Classic.

Kitayama previously won the Mauritius Open in just his third start since earning his European Tour card through Q-school.

The other was David Lipsky at the Alfred Dunhill Championship in South Africa at the end of last year. Lipsky was born in Los Angeles and played his college golf at Northwestern.

Lipsky and Kitayama are in the field this week at the Qatar Masters, along with Americans Sean Crocker and Charlie Saxon.

A month before the first major is played at the Masters, spots are on the line for the British Open in July.

The Open Qualifying Series for PGA Tour events typically doesn’t start until tournaments leading up to the Open. This year, the first such event is the Arnold Palmer Invitational at Bay Hill.

The top three players not already exempt who finish among the top 10 at Bay Hill will be exempt for Royal Portrush on July 17-21.

PGA Tour Commissioner Jay Monahan wanted a young player as a partner when he played the AT&T Pebble Beach Pro-Am, and he selected Keith Mitchell. They were going along fine as a team until the end, when they missed the cut based on matching scorecards.

Monahan’s father, Jay, was his caddie for the week.

Mitchell didn’t advance individually either, hurt by a four-putt double bogey on the 17th hole at Pebble Beach. He missed the cut at Riviera the following week and took the following week off to reset his thinking and pay more attention to his shots than the score. A week later, he won the Honda Classic.

Monahan was happy for him. Apparently, so was Monahan’s father.

“My dad was driving home from Vero Beach, pulled off the side of the road at a gas station and watched him play the final hole,” Monahan said.

Sung Hyun Park returned to No. 1 in the women’s world ranking with her victory in Singapore. It’s the third time Park has reached No. 1. Her longest stay was 11 weeks last season. … Women’s British Open champion Georgia Hall and Thidapa Suwannapura are the only players to have competed in all five LPGA Tour events this year. … British Open champion Francesco Molinari has signed an endorsement contract to play Callaway’s clubs (driver, fairway metals, irons, wedges, putter) and carry a staff bag. … British-based bookmaker Betfred is the new title sponsor of the British Masters, to be played May 9-12 at Hillside Golf Club. Tommy Fleetwood, who grew up in Southport, England, is the tournament host this year. …

This is the fifth straight time that a player rose to No. 1 in the world ranking without playing the previous week.

“I’ll play out here as long as they’ll let me, as long as I’m exempt, just to keep going back for that feeling.” — Keith Mitchell, on the 15-foot walk to the hole after making birdie to win the Honda Classic.