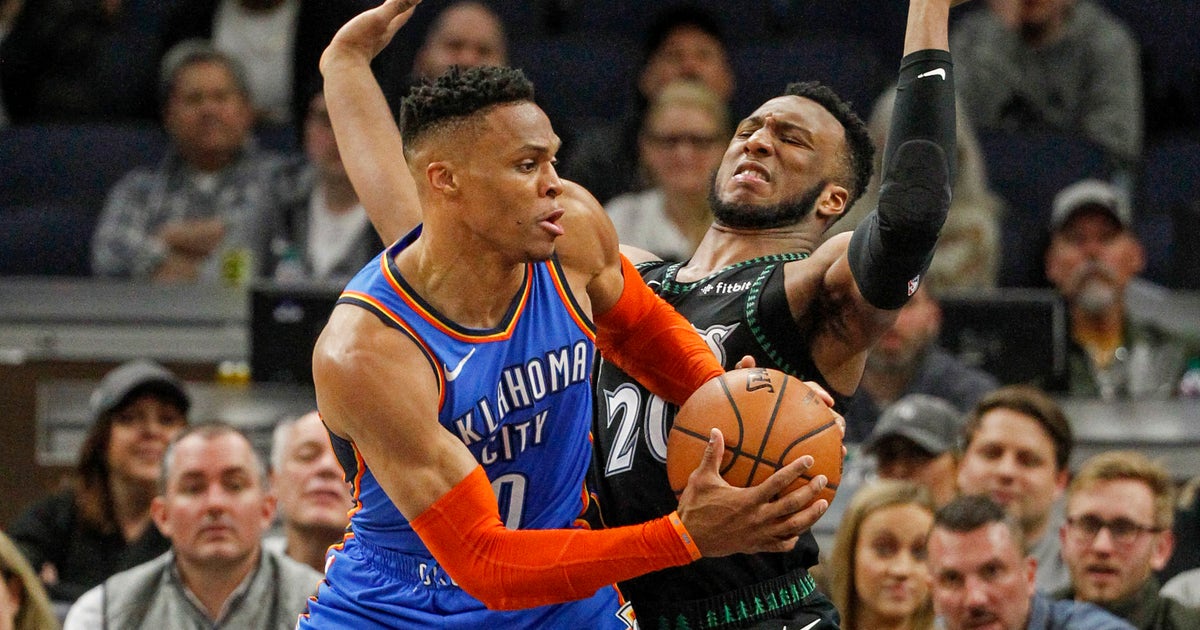 MINNEAPOLIS (AP) – Karl-Anthony Towns is putting up impressive offensive numbers. All he cares about, though, are wins.

Another huge night from Towns helped Minnesota snap a three-game losing streak Tuesday. The star center had 41 points and 14 rebounds as the Timberwolves spoiled Paul George‘s return to the Oklahoma City lineup with a 131-120 victory over the Thunder.

Towns has 182 points over his last five games, the best five-game stretch in team history. He fell one point shy of tying his season high.

“You can have all the numbers you want, but you don’t ever want to be the guy that’s getting good stats on a losing team,” Towns said. “We’ve got to find ways to win. I’d rather have less stats and have more wins than to do what I’ve been doing recently.”

Towns scored 16 in the third quarter as Minnesota kept its foot on the gas after taking a 14-point lead into halftime. He capped the victory with a thunderous dunk to give him his second 40-point game of the season.

The Timberwolves have won all three meetings with the Thunder and are 6-1 against Oklahoma City since the beginning of last season.

Derrick Rose added 19 points and Andrew Wiggins scored 18 for Minnesota, which began the night six games out of a playoff spot.

Thunder guard Russell Westbrook had 38 points on 15-of-28 shooting.

George was back on the court after missing three games with a right shoulder injury. He scored 25 points but was 8 of 25 from the field, including 4 for 14 from 3-point range.

“The rhythm was off a little bit, not only for myself but just the rhythm with my guys out there,” George said. “But I feel fine.”

Rose scored eight points in the final 2:04 of the first quarter to push Minnesota’s lead to 30-22 after one. The Thunder had erased a 10-point deficit before Rose’s late outburst put the Wolves back on top.

After picking up two fouls early in the first quarter, Towns got hot in the second. He scored six straight Timberwolves points and finished the half with 15.

Towns’ 41-point effort in just 30 minutes came two games after he scored a season-high 42 against Indiana. He closed the game against Oklahoma City with 10 points and five rebounds in the fourth quarter.

“Everybody followed KAT,” Rose said. “When he’s got things rolling like that, it’s hard to miss him out there so we just tried to play through him and we tried to keep this thing going.”

Oklahoma City never led by more than three and couldn’t get closer than nine in the fourth quarter.

“At the end of the 48 minutes we scored 120 points,” coach Billy Donovan said. “That’s more than enough, so for us it’s on defense.”

Thunder: Will also face Portland, the Los Angeles Clippers and Utah on their four-game road trip before returning home March 13. … G Dennis Schroder picked up a technical foul midway through the second quarter, his ninth of the season. … Oklahoma City won seven of its previous 10 at Minnesota.

Towns had just two points in 3:22 before sitting out the rest of the first quarter due to foul trouble. He said he had to make adjustments to avoid getting into further foul trouble.

“I work tremendously hard on my craft to be able to go to another bag, a bag that requires less contact and more skill shots,” Towns said. “It worked out.”

Thunder: At the Portland Trail Blazers on Thursday.