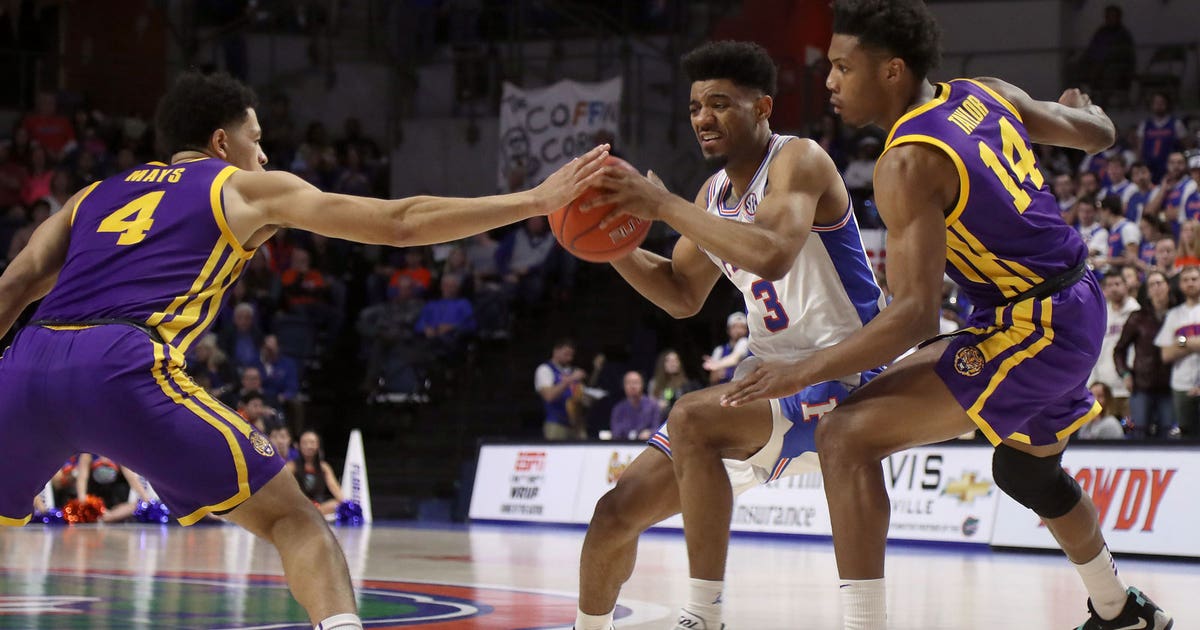 GAINESVILLE, Fla. (AP) — Getting to overtime was the tough part for LSU.

Winning in the extra frame? That’s pretty much what the Tigers have done all season.

Tremont Waters dribbled the length of the court for the tying basket with 3 seconds remaining in regulation and hit a 3-pointer early in overtime, helping No. 10 LSU escape Florida with a 79-78 victory Wednesday night.

The Gators had a chance to win it with 7.8 seconds left in the extra period, but Jalen Hudson slipped and then KeVaughn Allen failed to get off a shot before the final buzzer.

“Golden opportunity,” Florida coach Mike White said. “To not get a shot off on your last possession is very disheartening. We had done so many positive things to be in that position.”

LSU nearly gave the game away in the final minute of regulation. Waters coughed up a turnover that led to a dunk at the other end and Skylar Mays missed the front end of a one-and-one.

Hudson, who scored 16 straight points in the second half in his final home game on “Senior Night,” looked as if he delivered the winner after Mays’ miss. His 3-pointer from the elbow rattled around the rim and fell through with 6.2 seconds left, putting the Gators (17-13, 9-8) up 72-70.

But that was enough time for Waters to go coast to coast while splitting Florida’s half-hearted defense.

“I don’t think any one man can stay in front of me,” Waters said. “So I just went by (Andrew) Nembhard and created that play.”

“Tremont did what he does,” White said.

Javonte Smart added 15 points for the Tigers, who have won eight of nine and avenged their only loss — to Florida in overtime — in the last month.

Emmitt Williams chipped in 13 points and 14 rebounds. Williams scored 11 straight in the first half, helping LSU build a double-digit lead.

“He was phenomenal,” Wade said.

The Gators stormed back in the second half behind Hudson, who finished with a season-high 33 points on 11-of-20 shooting. Hudson struggled the first three months of the season but has scored in double figures in seven of the last eight games.

“It does beg the question,” White said, wondering aloud where that kind of performance has been all season. “He got it going.”

Allen, Florida’s leading scorer, had another poor shooting performance. The senior, one of three honored before the game, had four points on 1 of 6 from the field. He has missed 21 of his last 25 shots, all in the last three games.

The Tigers pounded Florida on the glass and in the paint, enjoying a plus-10 rebounding advantage and outscoring the Gators 44-26 in the lane.

“We just needed to get the ball on the backboard,” Wade said.

LSU: The Tigers can clinch a share of the SEC regular-season title with a victory Saturday against lowly Vanderbilt. They already have locked up a double-bye in next week’s conference tournament and continue to improve their NCAA Tournament seeding.

Florida: The Gators are playing consecutive games against Top 10 teams for the first time since the 2007 Final Four. The Gators won both of those a dozen years ago to clinch the national championship. They might need to upset Kentucky on Saturday to secure a spot in this year’s NCAA Tournament field.

LSU forward Naz Reid was limped to the bench in the final few seconds and was later helped off the court on a stretcher.

Wade said Reid was dehydrated and on the stretcher only as a precaution. Reid finished with nine points and five rebounds.

Florida’s Noah Locke broke the school’s freshman record for 3-pointers when he hit his second of the game and 75th of the season early in the second half. Anthony Roberson set the previous mark in 2003.

LSU hosts Vanderbilt in the regular-season finale Saturday. It will be “Senior Night” for the Tigers, who will honor forward Kavell Bigby-Williams.

Florida plays at No. 6 Kentucky on Saturday. The Wildcats won the first meeting 65-54 in early February.