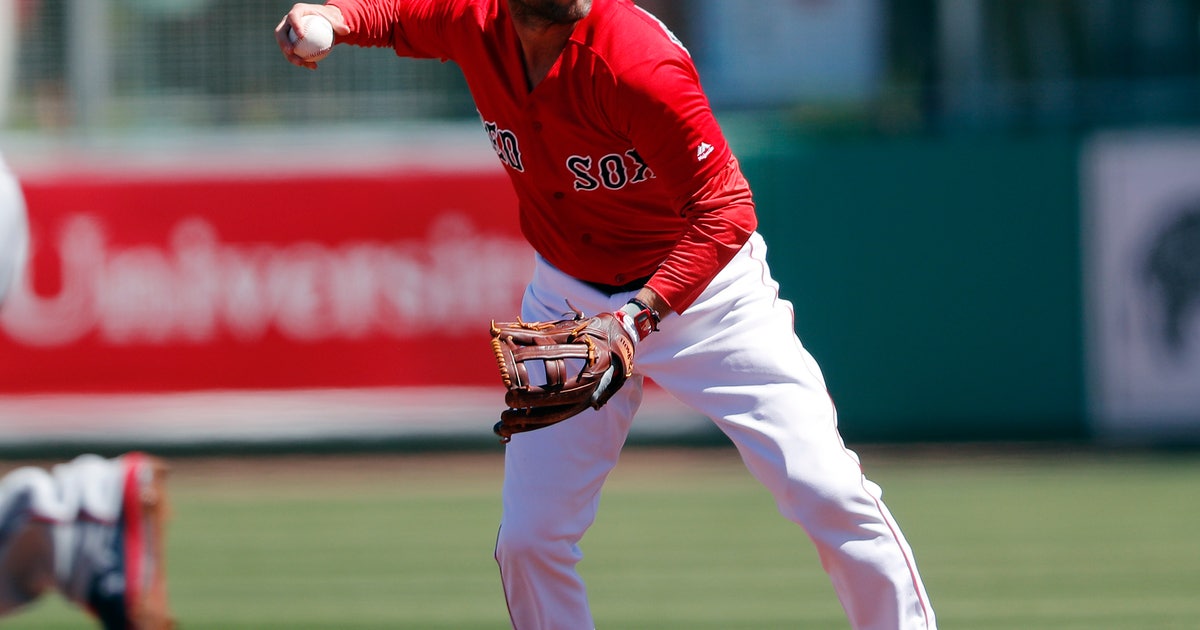 FORT MYERS, Fla. (AP) — Dustin Pedroia’s first game in nearly 10 months couldn’t have gone much better — even if it lasted just one inning.

Pedroia cleanly fielded a two-out grounder by Minnesota’s Jake Cave, then singled off Kohl Stewart leading off the bottom half of Boston’s 12-1 loss Thursday.

“It made me happy to run around the bases,” Pedroia said. “It was really fun out there.”

A four-time All-Star and the 2008 AL MVP, Pedroia’s knee problems began with a spikes-up takeout slide at second by Baltimore’s Manny Machado on April 21, 2017. Pedroia went on the disabled list three times that season, twice because of knee inflammation, and had left knee surgery that Oct. 25.

He played in five injury rehabilitation games at Triple-A Pawtucket last May 14-24, appeared in three games for the Red Sox from May 26-29, then went back on the disabled list for the rest of the season.

“I just need to keep building on this. I hadn’t seen a pitch since May 29. Everything went well,” Pedroia said.

Cave and Ronald Torreyes both had three hits and each drove in a run for Minnesota.

Stephen Strasburg made his second start for Washington, pitching four shutout innings and allowing one hit and one walk, while striking out five. Adam Eaton hit his first home run — a solo shot off Jacob deGrom, who gave up two runs, two hits and two walks over three innings in his third start.

Justin Verlander struck out five over 3 1/3 scoreless innings in his second start for Houston. He allowed five hits and two walks. Carlos Correa had an RBI single.

James Paxton allowed three hits and struck out five in 3 1/3 shutout innings, and prospect Estevan Florial hit his first home run, a three-run drive. Miguel Andujar had two singles, scoring twice. Danny Farquhar pitched a hitless seventh inning in his second appearance. He collapsed in the Chicago White Sox dugout on April 20 because of a ruptured aneurysm and brain hemorrhage.

Jean Segura doubled and scored, Phil Gosselin had an RBI double and Sal Butera singled in a run.

Detroit newcomer Josh Harrison singled and is batting .455 for Detroit. Jordan Zimmermann made his third start, striking out six in four innings while allowing one run and two hits.

Tyler Glasnow, the No. 3 starter in Tampa Bay’s three-man rotation, gave up one run, one hit and one walk in 2 1/3 innings. Yandy Diaz had a two-run single.

Mike Wright Jr. allowed a hit in three shutout innings in his third start for Baltimore. Top prospect Yusniel Diaz singled to raise his average to .407.

Jon Lester made his third start, allowing three runs and four hits while striking out four in 3 2/3 innings.

David Dahl hit his first home run, singled twice and drove in two runs for Colorado. Tom Murphy homered for a second time and doubled, driving in four runs. Closer Wade Davis made his second appearance, striking out two in a scoreless fourth.

Wilson Contreras had a two-run double for Chicago

Trevor Bauer made his third start for Cleveland, allowing two runs and five hits in four inninss. Trayce Thompson had a two-run double.

Austin Barnes drove in two runs with a double and a bases-loaded walk, and Enrique Hernandez had two singles and scored twice.

Peter Bourjos doubled, raising his average to .524. Closer Cody Allen made his third appearance, allowing a hit in a scoreless inning.

Leury Garcia singled and doubled, driving in two runs for Chicago. Tim Anderson added two hits, a stolen base and an RBI and is batting .500. Carlos Rodon made his second start, pitching four shutout innings and allowing a hit and a walk. Closer Alex Colome allowed a hit in a scoreless inning.

Zach Davies gave up one run and four hits in four innings for Milwaukee. Tyler Saladino hit his first home run and doubled.