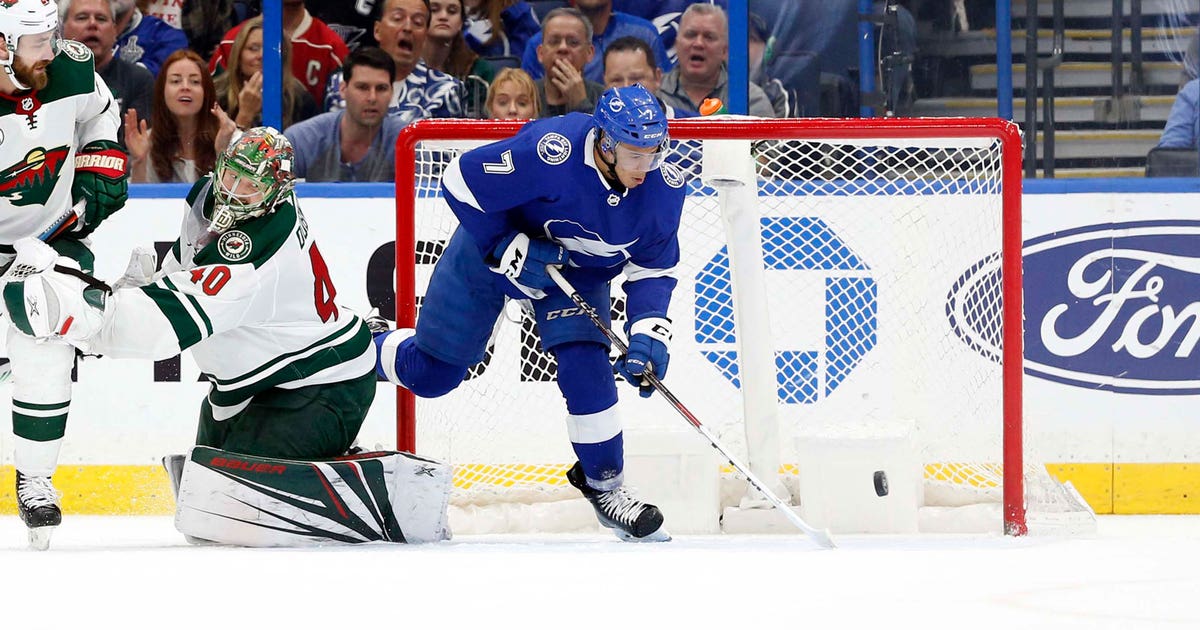 TAMPA, Fla. (AP) — Jason Zucker scored all three of Minnesota’s goals for his first career hat trick, Devan Dubnyk made 25 saves for his second shutout of the season and the Wild beat Tampa Bay 3-0 on Thursday night to deny the Lightning a chance to become the first NHL team to clinch a playoff spot.

Ryan Donato had a pair of assists for Minnesota, which blocked 18 shots by Tampa Bay. The Wild are 6-0-2 in their last eight games and are in the first wild-card spot in the Western Conference playoff race.

Andrei Vasilevskiy finished with 27 saves, but had his 10-game winning streak snapped one game short of tying the franchise record set by Louis Domingue earlier this season.

A victory by the Lightning would have clinched a playoff spot after Columbus loss to Pittsburgh earlier in Thursday night.

Zucker put the Wild in front in the first period off a rush play, getting a deflection on Donato’s shot at 10:50.

Minnesota protected the lead with a strong defensive effort the rest of the way. And the rare times the Lightning produced a chance, Dubnyk was there to keep the highest-scoring team in the league off the board.

Dubnyk’s best save at 6:44 of the second period when Anthony Cirelli raced in on a breakaway chance. But Dubnyk came out with an aggressive poke check and stopped the puck with his helmet to keep the Wild in the lead.

Zucker doubled Minnesota’s lead in the third period during a scramble in front, knocking the puck out of the air and into the vacated part of the net. The play was originally ruled no goal for being hit with a high stick. But the officials discussed the play and ruled it a legal goal before going to video review, where the goal was upheld.

Zucker completed the hat trick with an empty-netter with 1:46 left.

NOTES: The Wild outshot Tampa Bay 14-5 in the third period. … Minnesota C Victor Rask participated in the morning skate, his first practice with the team since suffering an undisclosed lower-body injury on Feb. 12. … Former Lightning RW J.T. Brown returned to Tampa for the first time since he was put on waivers last season. Brown appeared in 286 games during parts of six seasons from 2011-18. … Tampa Bay trailed after the first period for just the 19 time this season in 68 games. .. Wild C Luke Kunin left in the second period and did not return after struggling to get to his skates following a hit from Cedric Paquette.

Wild: At Florida on Friday.