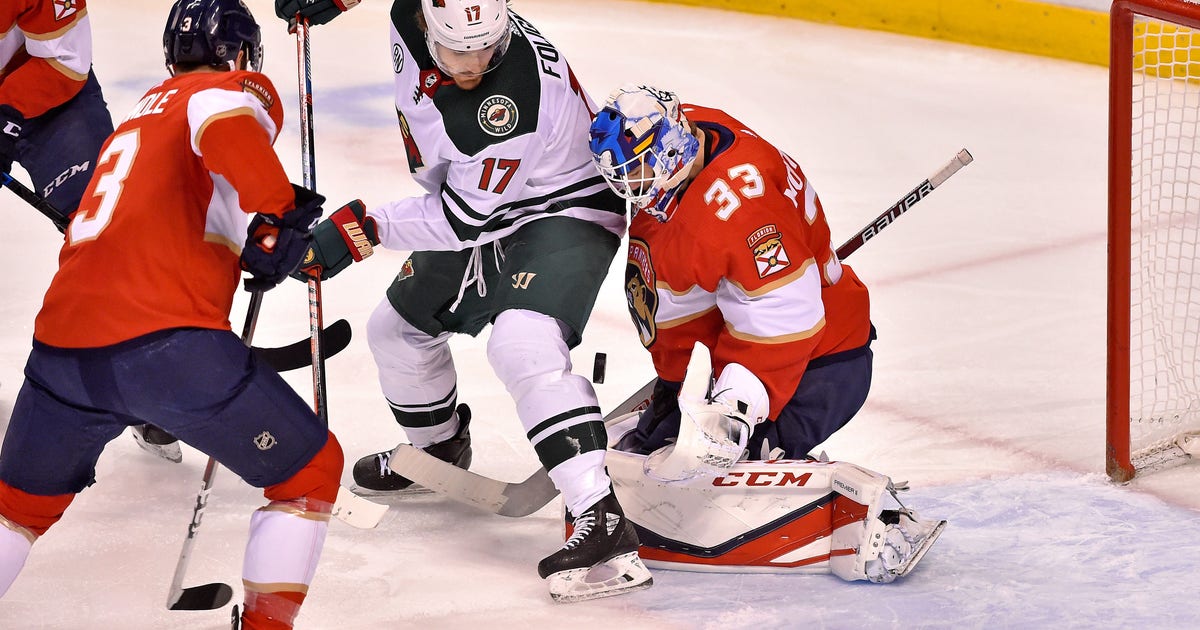 SUNRISE, Fla. (AP) — The Florida Panthers bounced back from a crushing loss in a big way.

Aleksander Barkov set a franchise record with five assists, and defensemen MacKenzie Weegar and Mike Matheson each scored twice as the Panthers beat the Minnesota Wild 6-2 on Friday night to snap a six-game losing streak.

The Panthers lost 4-3 in Boston on Thursday night when the Bruins scored twice in the final 37 seconds.

“It was probably the toughest loss we ever had, 30 seconds away from a perfect 60-minute game against a really good team,” Barkov said. “Coming here, we had two choices — either forget about the last game and play as hard as we could this game, or just feel sorry about ourselves. I think we really played our butts off and deserved the win.”

“It’s great,” Montembeault said. “It’s obviously good to put it behind me. Now next game I can just go out there and play my game and not even think about anything.”

Barkov appeared to have scored a goal as well, but it came a split second after the second period ended. He expressed appreciation to his teammates for helping him break the assists mark.

“Of course, it’s a nice milestone,” Barkov said. “I just gave the puck to my own players and they scored. I’m thankful for them.”

The line of Barkov, Huberdeau and Dadonov combined for 12 points.

“We needed that today,” Panthers coach Bob Boughner said. “We needed someone to put us on their back and carry us a little bit early and that was Barky’s line, for sure.”

Marcus Foligno and J.T. Brown scored for the Wild, who had their eight-game point streak stopped. Devan Dubnyk allowed three goals on seven shots before he was replaced by Alex Stalock to start the second period. Stalock stopped 19 shots.

The Wild had beaten Tampa Bay 3-0 on Thursday night.

“Obviously, we didn’t have the same kind of jump that we had against Tampa,” coach Bruce Boudreau said. “Those are the things that make coaches go nuts because we needed it and we didn’t show up.”

Florida stretched its lead to 5-1 when Matheson scored with a wrist shot from the right circle at 17:40 of the second period. The Wild answered 15 seconds later on Foligno’s tap-in.

Hoffman’s one-timer from the right circle during a 5-on-3 power play gave the Panthers a 4-0 lead at 3:34 of the second.

Brown deflected a shot by Jonas Brodin into the net to make it 4-1 at 9:02 of the second.

The Panthers took a 3-0 lead on seven shots in the first period. They went up 1-0 on Huberdeau’s goal 61 seconds in. Barkov passed from behind the net to Huberdeau in front and he skipped the puck into the net.

His first goal gave the Panthers a 2-0 lead when his wrist shot from the point bounced off the back of Minnesota’s Ryan Suter and across the goal line at 16:51.

Weegar stretched it to 3-0 on his second goal, a shot from the top of the right circle that got past Dubnyk at 18:31.

A potential goal by Aaron Ekblad midway through the first period was disallowed after Minnesota successfully challenged for offside. Barkov would have had another assist if the goal had counted.

NOTES: Panthers G James Reimer returned after missing five games with a lower-body injury and backed up Montembeault, who is now a regular recall. The Panthers will go with three goalies the rest of the season. … Wild C Luke Kunin was scratched with an upper-body injury sustained in Thursday’s game at Tampa Bay.