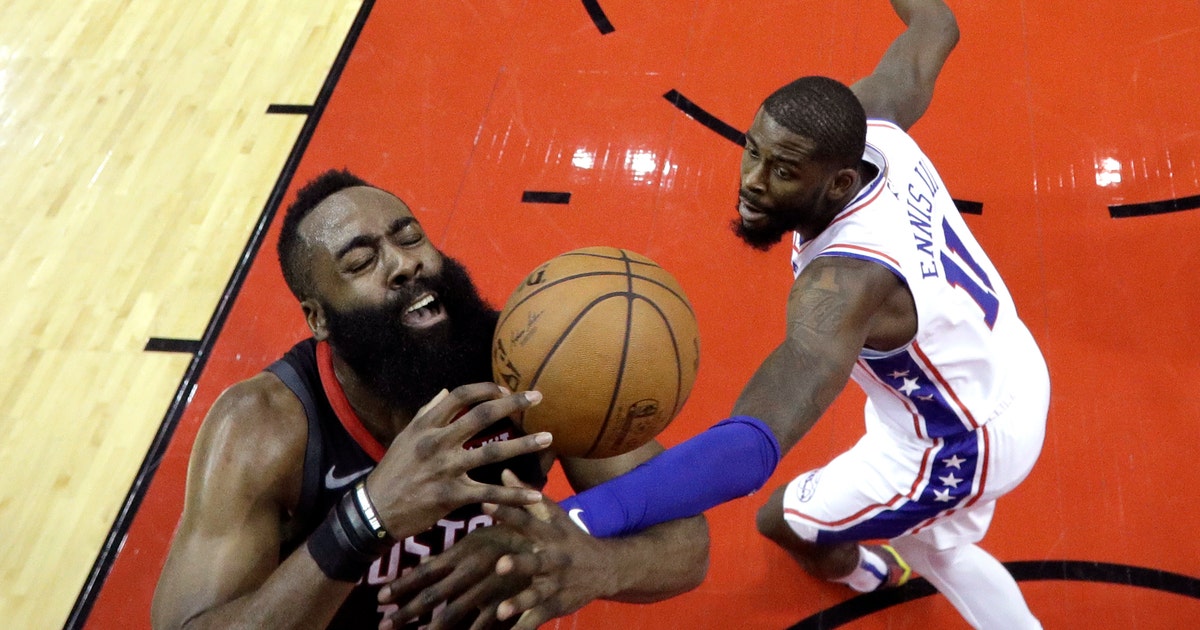 HOUSTON (AP) — James Harden had 31 points and 10 rebounds and the Houston Rockets extended their winning streak to a season-high seven games with a 107-91 win over the Philadelphia 76ers on Friday night.

The Rockets had a big lead for most of the night after a 37-point first quarter and were up by 22 entering the fourth. Philadelphia had trouble containing Clint Capela with Joel Embiid out for the eighth straight game with a sore left knee, and Houston’s big man had 18 points and nine rebounds.

The victory came after Philadelphia won the first meeting this season 121-93 behind 32 points from Embiid.

Tobias Harris had 22 points for the 76ers, who dropped their second straight. Ben Simmons played despite dealing with stomach flu and added 15 points, 10 assists and nine rebounds.

Pascal Siakam had 19 and Jeremy Lin added 14 for the Raptors, who began to pull away late in the third quarter and cruised to the finish against a Pelicans squad missing Anthony Davis, Jrue Holiday and E’Twaun Moore.

CHICAGO (AP) — Blake Griffin scored 16 of his 27 points in the fourth quarter after going to the locker room with an apparent right leg injury, and Detroit rallied to beat Chicago for its fourth straight victory.

Griffin missed much of the third quarter after he appeared to tweak his right knee early in the second half. But he returned for the start of the fourth and went 7 for 10 from the field to help Detroit improve to 11-2 in its last 13 games.

Zach LaVine scored 24 points for Chicago, which led by as many as 21 in the first half.

MIAMI (AP) — Josh Richardson scored 20 points, Rodney McGruder had a seven-point possession in the fourth quarter to help put the game away, and Miami beat Cleveland.

Bam Adebayo scored 17 points and Justise Winslow finished with 16 points, nine rebounds and nine assists for the Heat, who beat Cleveland at home for the 16th consecutive time and extended their current winning streak to four games. Kelly Olynyk scored 15, McGruder had 13 and Dwyane Wade finished with 12 for Miami.

Williams was 7 of 10 from beyond the arc and had seven rebounds as the Hornets got a much needed win to remain in the hunt for the eighth spot in the Eastern Conference playoffs.

Jeremy Lamb had 19 points and 10 rebounds and made a go-ahead 3-pointer in transition with 50.9 seconds left, the 14th and final lead change of a nip-and-tuck game. Kemba Walker added 18 points for Charlotte but again struggled from the field shooting 6 of 19.

Bobby Portis had 23 points and nine rebounds for the Wizards, who have lost eight of their last 10.

The last-place Grizzlies won their second in a row. They have not won three straight since November.

Donovan Mitchell led Utah with 38 points, including 20 in the fourth quarter.

Aaron Gordon added 18 points for Orlando, which won for the 11th time in 16 games.

Luka Doncic had 24 points and eight rebounds for Dallas, which has lost four straight and nine of 10. Jalen Brunson added 18 points and nine assists.

Dirk Nowitzki scored nine points in the fourth quarter and finished with 15, matching his season high in his 21st and final NBA season.