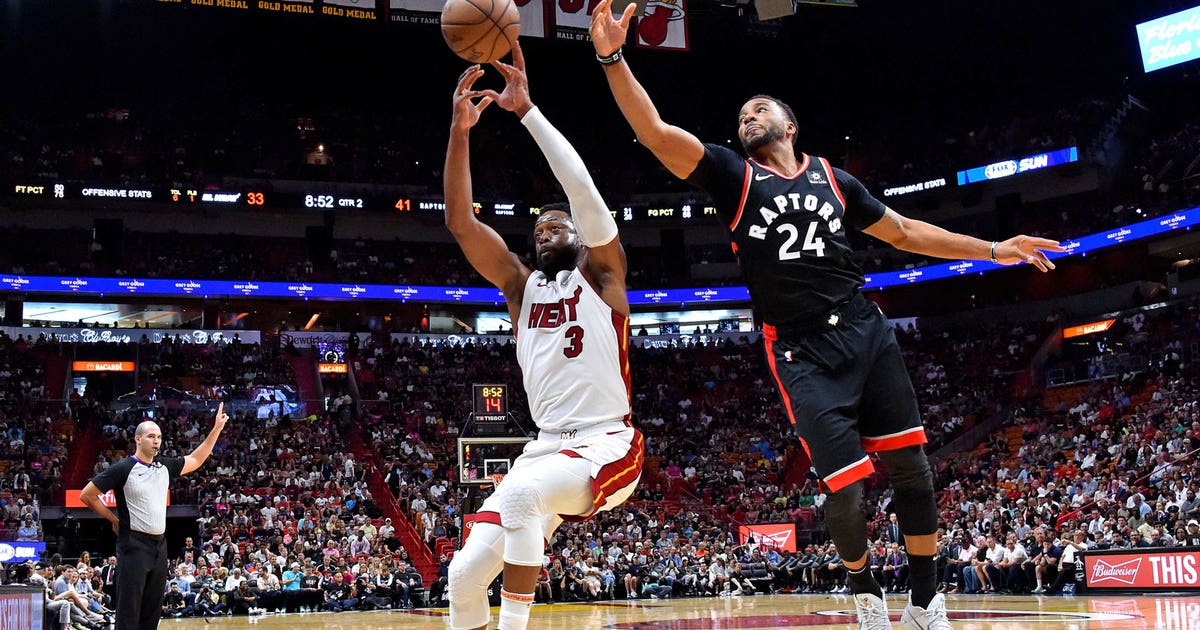 MIAMI (AP) — Kyle Lowry had 24 points and 10 assists, Pascal Siakam scored 20 and the Toronto Raptors tied a franchise record with 21 3-pointers on the way to beating the Miami Heat 125-104 on Sunday.

Bam Adebayo scored 19 for the Heat, who had won four in a row. Dion Waiters and Dwyane Wade each scored 15, and Rodney McGruder added 13.

Kawhi Leonard missed the game — “load management” the cited reason — and hasn’t appeared in more than two consecutive Raptors games since playing in five straight from Jan. 25 through Feb. 5.

It hasn’t hurt Toronto: The Raptors are now 14-5 when Leonard doesn’t play, and he’ll sit a few more before the playoffs.

“We’ve kind of looked at it all the way through now, and I think there’s maybe a few games yet that he’s going to probably stay out,” coach Nick Nurse said. “We’re just super happy with where we are with it. We kind of feel like we’re ahead of the game.”

The Raptors set the tone early, going 7 for 10 from 3-point range in the opening quarter.

They cooled off, albeit only slightly.

By halftime Toronto was up to 12 makes from beyond the arc, helping send the Raptors into the locker room with a 68-54 lead. They had a 14-0 run late in the second quarter, and then the 3s just kept coming.

When Miami closed within 10 on a dunk by Adebayo early in the third, Green made a 3 to snuff out the mini-rally by the Heat. Miami got within 11 early in the fourth, and Lowry connected from deep. Lin connected not long afterward from deep, and then Lowry ended any doubt by making his sixth of the game for a 105-89 lead.

Raptors: This was the third straight Sunday game for the Raptors, and Leonard has missed them all. They play in Detroit next Sunday, and on his current schedule Leonard might be in line to sit that one out as well. … Toronto is now 55-1 since December 2013 when having a 14-point lead or better at the half. The loss came last season, in Cleveland.

Miami didn’t block any of Toronto’s 74 shot attempts. The last time the Heat didn’t block a shot was Nov. 1, 2017, against Chicago — 145 games ago, including playoffs. That ends the fifth-longest such streak in team history.

The Raptors went with a new starting five, putting Patrick McCaw on the first unit for the first time this season. It was McCaw’s first start since March 29, 2018, for Golden State. His first start, oddly enough, was also against Miami for the Warriors back in 2017. McCaw scored 10 points, going 3 for 3 from 3-point range.