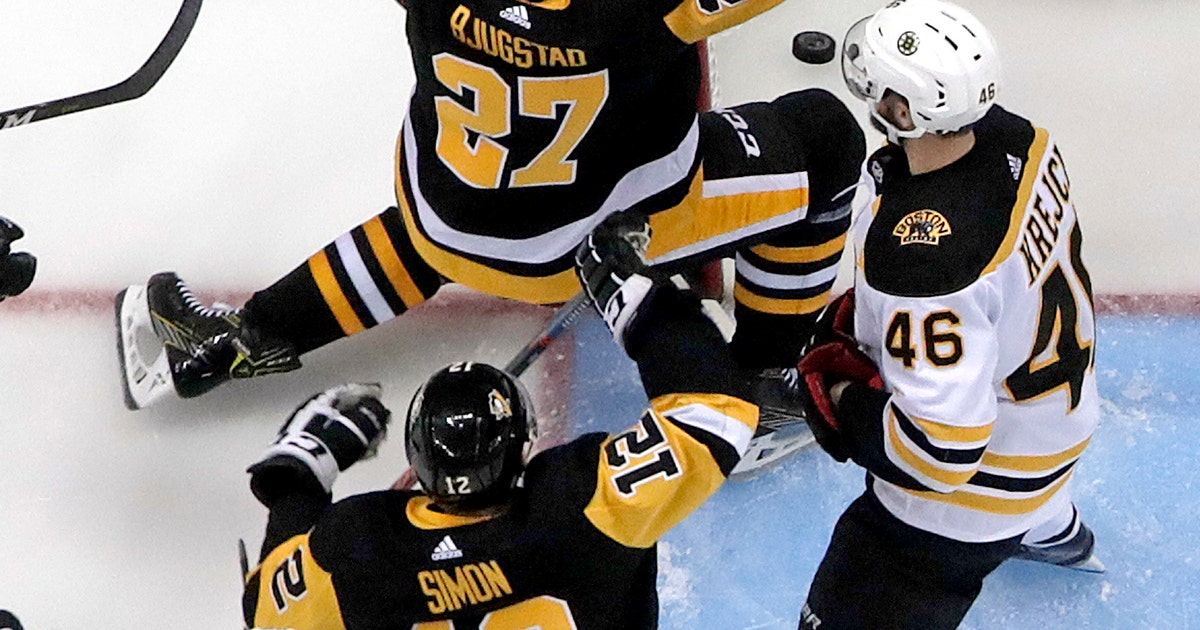 Nick Bjugstad and Jake Guentzel also scored for the Penguins, who survived another late push by the Bruins.

David Krejci picked up his 19th of the season and John Moore got Boston within one when he scored with just over a minute to go. But the Bruins couldn’t complete the comeback, ending their 19-game point streak.

It was the first regulation loss for Krejci and company since Jan. 19 against the New York Rangers.

Jaroslav Halak made 33 stops, but Boston remained winless in Pittsburgh since December 2015.

WASHINGTON (AP) — Carl Hagelin scored the go-ahead goal on a breakaway out of the penalty box and Pheonix Copley made 33 saves, helping the Capitals to their seventh consecutive victory.

Led by Copley, Hagelin and Nick Jensen, the Capitals killed off all five minor penalties they took and won despite being outshot 34-18. They haven’t lost since adding Hagelin and Jensen to their lineup before the trade deadline.

Nicklas Backstrom also scored and Lars Eller added an empty-netter for the Capitals, who now lead the Metropolitan Division by four points.

Mathieu Perreault scored for Winnipeg, and Connor Hellebuyck made 15 saves.

SUNRISE, Fla. (AP) — Aleksander Barkov reached 30 goals for the first time in his career, and Florida earned its second straight win since a costly six-game slide.

Josh Brown and Dryden Hunt each scored their first NHL goal for the Panthers. Jonathan Huberdeau had a goal and an assist, and Jamie McGinn and Frank Vatrano also scored.

Making his third NHL start, Sam Montembeault stopped 19 shots as the Panthers finished their season series against the Red Wings with a 3-0-1 record.

The 23-year-old Barkov had at least 21 goals in each of the previous three seasons, but he had never reached 30 until he made it 6-1 7:44 into the third period.

Thomas Vanek had a power-play goal for Detroit, which dropped to 1-7-3 in its past 11 games. Jimmy Howard had 37 saves.