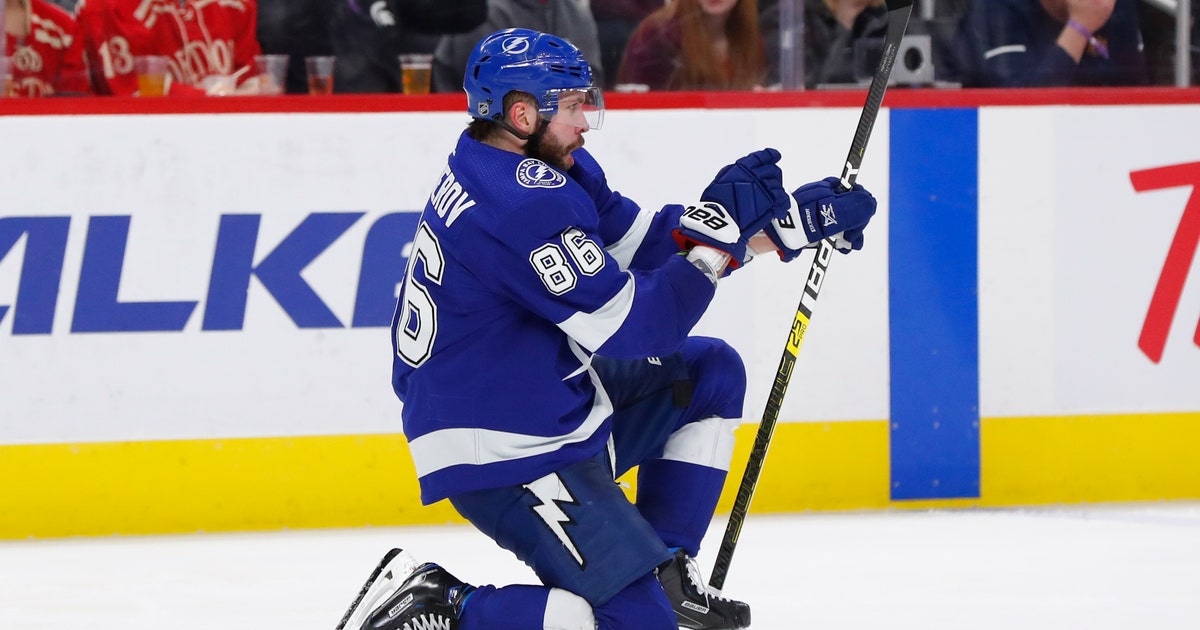 The Red Wings led 3-0 in the second when Stamkos scored on the power play to start Tampa Bay’s comeback. His 383rd goal pulled him even with Lecavalier, and the NHL-leading Lightning weren’t done. The league’s highest-scoring team added four goals in the third, with Kucherov and Tyler Johnson scoring 26 seconds apart to give Tampa Bay the lead with 11:10 remaining. Kucherov made it 5-3 with 3:22 left.

Nick Bjugstad and Jake Guentzel each had a goal and an assist for the surging Penguins, who have won six of seven and sit third in the Metropolitan Division. Brian Dumoulin and Patric Hornqvist also scored, and Casey DeSmith made 26 saves for his fourth career shutout.

Carter Hutton stopped 21 shots for the Sabres, who matched a franchise record with three consecutive shutout losses. It happened for the first time last season during a three-game stretch that concluded with a 4-0 loss to Pittsburgh.

ST. PAUL, Minn. (AP) — Radek Faksa, Roope Hintz and Joel L’Esperance scored in a span of 2:22 early in the second period, and Dallas hung on to beat Minnesota after goalie Ben Bishop got hurt.

Anton Khudobin stopped 14 of the 15 shots he faced in relief of Bishop, who made seven saves and established a franchise record by stretching his scoreless streak to 240:53 before exiting with a lower-body injury.

Alexander Radulov added an empty-netter for the Stars, who have won six of their last seven games — five in regulation.

Jason Zucker had the only goal for the Wild, who took a big hit in the Western Conference wild-card race with their third consecutive loss. They’re in ninth place with 74 points and 11 games to go, trailing Arizona for the final spot.

The Stars, meanwhile, moved into a tie with St. Louis for third place in the Central Division with 79 points. They have 12 games remaining, as do the Blues.

Adam Pelech also scored in the second period to help the Islanders win for the fourth time in five games to remain two points behind first-place Washington in the Metropolitan Division.

Jordie Benn had the tying goal for Montreal late in the second, and Carey Price finished with 36 saves.

Lee converted on a 2-on-1 with Matthew Barzal for his team-leading 25th goal of the season with 2:57 remaining.

Blake Wheeler added a goal and an assist, and Jacob Trouba and Nikolaj Ehlers also scored for the Jets. Patrik Laine had two assists and Connor Hellebuyck stopped 36 shots as Winnipeg moved three points ahead of Nashville atop the Central Division.

Ehlers scored the eventual game-winner with just under 7 minutes left after Trouba put the Jets ahead 3-2 earlier in the third period. Coyle got Boston within one with 2:56 remaining, but the Bruins couldn’t tie it up.

PHILADELPHIA (AP) — Brett Connolly had two goals and an assist to help Washington maintain its lead atop the Metropolitan Division.

Evgeny Kuznetsov added a goal and an assist, and Lars Eller and Tom Wilson also scored as the Capitals stayed two points ahead of the second-place New York Islanders in the division. Braden Holtby stopped 22 shots.

James van Riemsdyk and Scott Laughton scored for Philadelphia, and Carter Hart finished with 27 saves. The Flyers remained five points out of the second wild card in the Eastern Conference.

Christian Wolanin and Chris Tierney scored to help the Senators snap a three-game losing streak. The shutout was Nilsson’s sixth of his career.