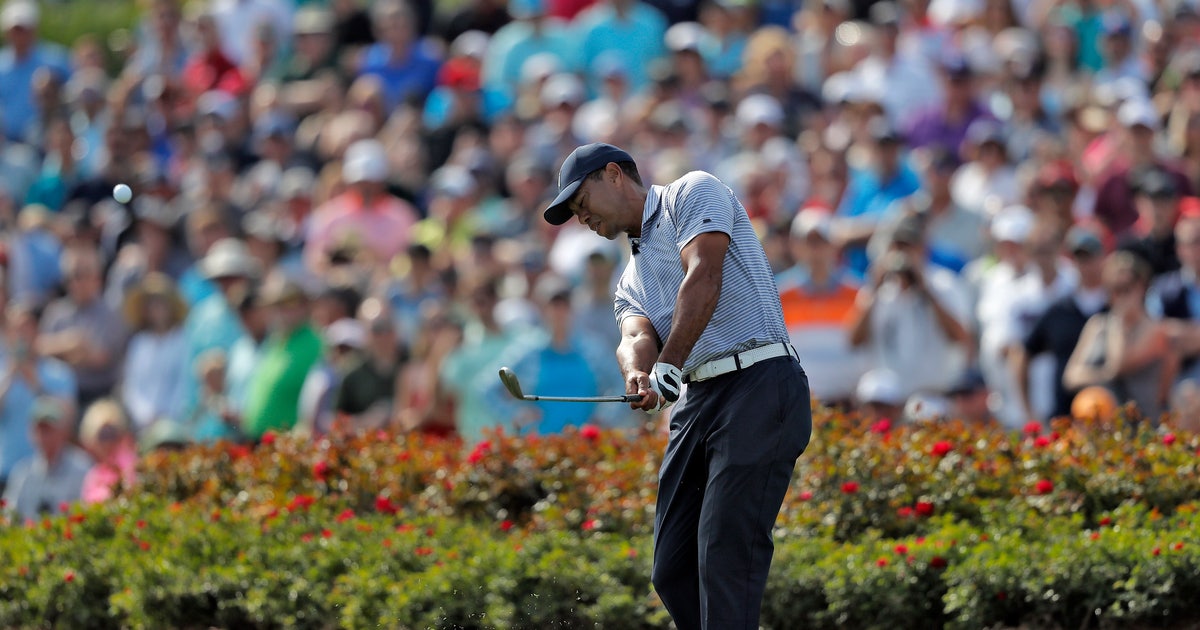 PONTE VEDRA BEACH, Fla. (AP) — Tiger Woods paused on the ninth green and stared at a nearby leaderboard.

His name would have been on it if not for one hole.

Woods hit two balls in the water at the par-3 17th at TPC Sawgrass — the first time he’s done that in 69 rounds at The Players Championship — and carded a quadruple-bogey 7 in the second round Friday. It was his worst score at the famed island green and matched his highest on any par 3 in 24 years on the PGA Tour.

Woods rebounded with two birdies on the front side, leading to a 1-under 71 and leaving him at 3-under 141 for the tournament.

He was well back of the leaders, but felt he was still within range heading to the weekend.

Woods was 5 under and tied for eighth, two shots off the lead at the time, when he approached the course’s signature hole. Thousands of fans surrounded the murky lagoon and were shocked when Woods’s wedge shot from 146 yards away strayed a little left, landed pin high and rolled off the green. It went through the rough, across a wood beam and plunked into the water.

“I was a bit surprised it went that far,” said Woods, who made par or birdie on every other hole Friday. “I took something off that wedge and it flew a lot further than I thought. The other guys took a little read off of that.”

Woods said he would have dialed back his swing had he hit after playing partners Patrick Reed and Webb Simpson. But he was the first to play.

He made a beeline to the drop area and promptly hit another into the drink. This time, he hit another wedge too flat and too hot. The ball one-hopped off the green and into the water.

“Both shots I’m just trying to hit the ball into the slope and just walk away with a 20-, 25-footer and move on about my business,” Woods said. “I was pretty ticked, no doubt about that, and I was bound and determined to get it all back and get it back to (5 under), and I thought that would have been a hell of a fight. Ended up getting back to 3 (under).

“Still was a good fight to get to that point, but as of right now I’m six back, which is definitely doable on this golf course, especially with the weather coming in.”

The forecast calls for cooler temperatures and a change in wind direction over the weekend, which could make scoring tougher on the Stadium Course.

Woods likes the way he’s played so far — aside from the one hole.

“I’m very happy with the way I’ve been grinding around this golf course,” he said. “I’ve missed a few opportunities to get up-and-down for birdie. Overall, I think I’ve putted pretty solidly. Other than 17 today, I really haven’t done a whole lot wrong. I very easily could be up near that lead. There’s no way I would be leading, but I would be close enough to that lead given the weekend and the forecast.”

He had no excuses for what happened at 17. Woods had hit four balls into the water during his previous 68 rounds at the Players. He had carded a double-bogey four times, including in the final round in 2018.

“Number-wise and club-wise, it shouldn’t be that hard,” Woods said. “But we all know if you land it up on top, it’s got a good chance of getting out of here. And that’s the tricky part: It’s just a wedge and you want to get it somewhere up there where you got a chance to make birdie, but you just can’t afford to land it too far up on top.”