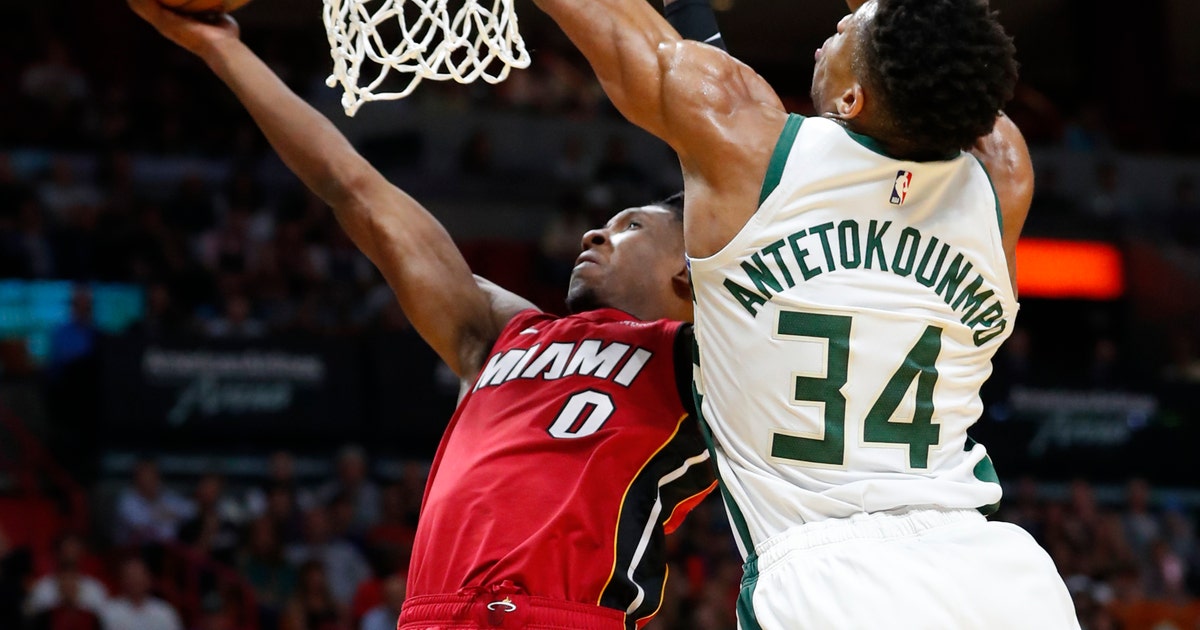 Antetokounmpo also had 16 rebounds and nine assists for the Bucks, who became the first team in NBA history to trail by at least 20 points at the half and win by more than 11. Khris Middleton scored 21 and Eric Bledsoe had 17 for the NBA-best Bucks, who improved to 52-17.

Milwaukee outscored Miami 71-36 in the second half.

Justise Winslow had all of his 20 points in the first half for Miami, which had its lead over Orlando and Charlotte for the No. 8 spot in the Eastern Conference trimmed to just one game. Hassan Whiteside had 14 points and 11 rebounds for the Heat, Josh Richardson scored 11 points and Dwyane Wade was one of four players with 10 for Miami.

Antetokounmpo was in total control of the second half, grabbing an offensive rebound with 2:40 left and throwing a no-look, behind-the-head pass to Bledsoe for a layup and a 110-92 lead. Most fans didn’t see it — they were long gone by then.

The Bucks lost Malcolm Brogdon in the first quarter to a sore right heel. Brogdon was 0 for 3 in 6 1/2 minutes.

The rally from 23 down was the Bucks’ biggest of the season, one better than what they did against Chicago on Nov 16. It was only the fifth game all season where the Bucks trailed by 20 or more, and they’re now 2-3 in those games.

Miami’s lead was 62-42 at the half, and everything was working.

And then, nothing worked.

The Heat came out flying, leading 25-8 before any of the starters came out for their first rest of the night. The biggest lead was 37-14 with a minute to go in the opening quarter, and the Bucks pared that down to 13 on three occasions in the second quarter. Miami wound up closing the half on a 10-3 spurt to push the lead back to 20.

It all changed — and fast.

The Bucks made as many 3-pointers in the third quarter — five — as the Heat made field goals. Middleton and Ersan Ilyasova each had 10 points in the quarter, Miami shot 5 for 20 and got outrebounded 16-8, and the lead was down to one going into the fourth.

Wade got hurt late in the third quarter, grabbing at his right hip. He went to the locker room, returned midway through the fourth and by then the Bucks were up by 10.

Bucks: The 20-point halftime deficit was Milwaukee’s largest of the season. The Bucks trailed Chicago by 18 at the break on Nov. 16 — then outscored the Bulls 78-41 in the second half and won easily. … George Hill returned after a nine-game absence with an adductor strain. He had to start the second half with Brogdon out.

Heat: It was the fourth time in franchise history that Miami lost when leading by 20 or more at the half. The Heat had been 51-0 all-time at home and 71-3 all-time overall with that big a lead at the break. … Miami signed guard Charles Cooke to a 10-day contract before the game. Cooke has been with the team’s G League affiliate in Sioux Falls.

Miami was bidding to become the second team this season to beat Milwaukee twice. Only Phoenix has managed to do that so far in 2018-19.