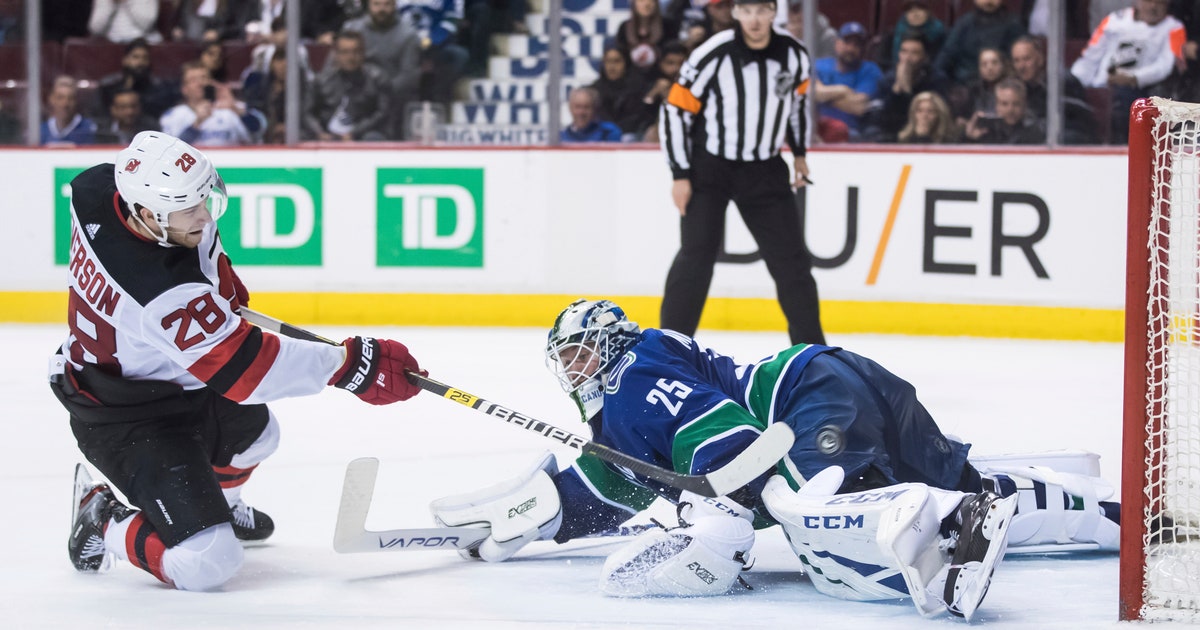 VANCOUVER, British Columbia (AP) — Damon Severson scored in the seventh round of the shootout to give the New Jersey Devils a 3-2 win over the Vancouver Canucks on Friday night.

Kevin Rooney and Stefan Noesen scored 7:53 apart in the third period to tie the score after the Devils trailed 2-0. MacKenzie Blackwood stopped 25 shots to give New Jersey its second straight win after a seven-game skid (0-6-1).

Petterson also scored on the opening attempt of the shootout, and Drew Stafford tied it for New Jersey in the second round.

Rooney started the Devils’ comeback with a deflection at 5:41 of the third. Noesen tied it with 6:26 left in regulation when he chipped Eric Tangradi’s pass behind Markstrom.

Pettersson broke out of a scoring slump with a power-play goal to open the scoring at 3:18 of the second period. With Stafford off for tripping, Petterson took a pass from Brock Boeser and ripped a shot from the faceoff circle over Blackwood’s shoulder. It was his first in 12 games and gave the 20-year-old Swede 59 points on the season — a team-leading 27 goals and 32 assists. He is one point behind Pavel Bure and Ivan Hlinka for most points in a season by a Vancouver rookie.

Pearson made it 2-0 at 1:42 of the third on an innocent looking shot from the top of the faceoff circle. Blackwood swung his stick, but the puck seemed to go underneath and between his pads.

The Canucks (29-32-10) mathematically remain in the playoff hunt. They trail Arizona by nine points in the race for the final Western Conference wild-card spot.

NOTES: Vancouver also scored on a power play in Wednesday’s win over the New York Rangers. It’s the first time since November the Canucks have scored on the power play in back-to-back games. … Canucks F Jay Beagle didn’t take the pregame skate and was replaced by Tim Schaller. … The Canucks didn’t get their first shot on goal until almost 6:30 was gone in the opening period. . Before the game started, the Devils were eliminated from playoff contention when the Columbus Blue Jackets defeated the Carolina Hurricanes 3-0. New Jersey is 14th in the Eastern Conference.

Devils: At Colorado on Sunday to finish a six-game trip.

Canucks: At Dallas on Sunday night to open a two-game trip.