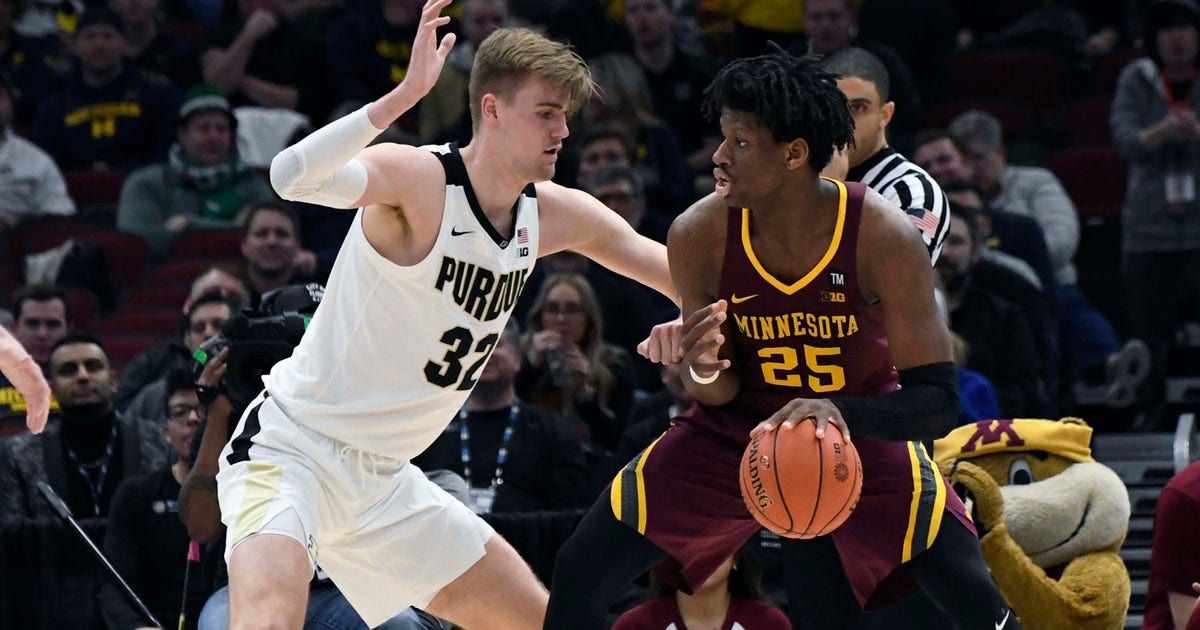 CHICAGO — Minnesota came into the Big Ten Tournament looking to secure a brighter postseason future after an inconsistent regular season.

With a trip to the conference semifinals, things are looking good. Even better, the Gophers knocked off one of the favorites to get there.

Murphy drove for a go-ahead three-point play and hit two free throws in the closing minutes, and the Gophers (21-12) beat the Boilermakers (23-9) for the second time in 10 days when Carsen Edwards missed a 3 as time expired.

Coffey made 7 of 13 shots. Daniel Oturu added 13 points and 10 rebounds, helping Minnesota advance to the semifinals for the second time in three years. The Gophers will face the Michigan-Iowa winner.

“We’ve just been weird,” coach Richard Pitino said. “We haven’t gone on these huge runs of wins. We’ve kind of like gone on some losing streaks and sneaked out a big win. We’ve got some unassuming guys.”

They were easy to overlook after an up-and-down regular season. But wins like this might open some eyes.

“They’re not a beat-your-chest type of group,” Pitino said. “I think it’s just a matter of winning games. … Our focus is not on attention. It’s on getting rest right now and seeing who we play next.”

Matt Haarms scored 16 points for Purdue. Ryan Cline added 14 points and eight assists. But after winning 17 of 20 to surge to a share of their second conference regular-season championship in three years, the Boilermakers never really found their rhythm.

Purdue missed its share of open jumpers and made just 6 of 24 3-pointers, with Edwards missing seven of eight from beyond the arc. The Big Ten’s leading scorer, he finished with 11 points on 4-of-17 shooting.

“It’s not like I was uncomfortable or as a team we were uncomfortable,” Edwards said. “We took shots we normally take. I don’t think they made us take shots we’re not used to taking.”

Minnesota led by as much as 10 in the second half. But Trevion Williams put back a missed three by Edwards to give Purdue a 71-69 lead with about 3:30 remaining.

Murphy drove for a three-point play to put Minnesota back on top and hit two free throws with 1:17 remaining to make it a three-point game.

After a weak miss by Haarms inside, Minnesota committed a shot-clock violation with 27 seconds to go.

Haarms scored in the post to cut it to 74-73 with 12 seconds left. Purdue immediately fouled Dupree McBrayer, who hit the first free throw but missed the second.

Haarms grabbed the rebound, but Edwards missed the potential winning three from the left corner as time expired.

“I think it gives us a lot of confidence, just knowing that our players can stay composed and withstand runs,” Murphy said.

Minnesota: The Gophers have won four of five after dropping six of seven. They were a good bet to make the NCAA coming into this tournament and might have avoided a play-in game with an overtime victory over Penn State on Thursday. They followed that up by beating one of the favorites to win the conference tournament.

Purdue: Instead of making a push for their second Big Ten Tournament title, the Boilermakers will try to regroup for the NCAAs.

“I feel like that was the best shot we had at that point. They denied me the ball and I had to make a second cut to get it. We were kind of short on time, so I had to make a play.” — Edwards on his missed three at the buzzer.

Minnesota: Will face No. 10 Michigan or Iowa in the semifinals.