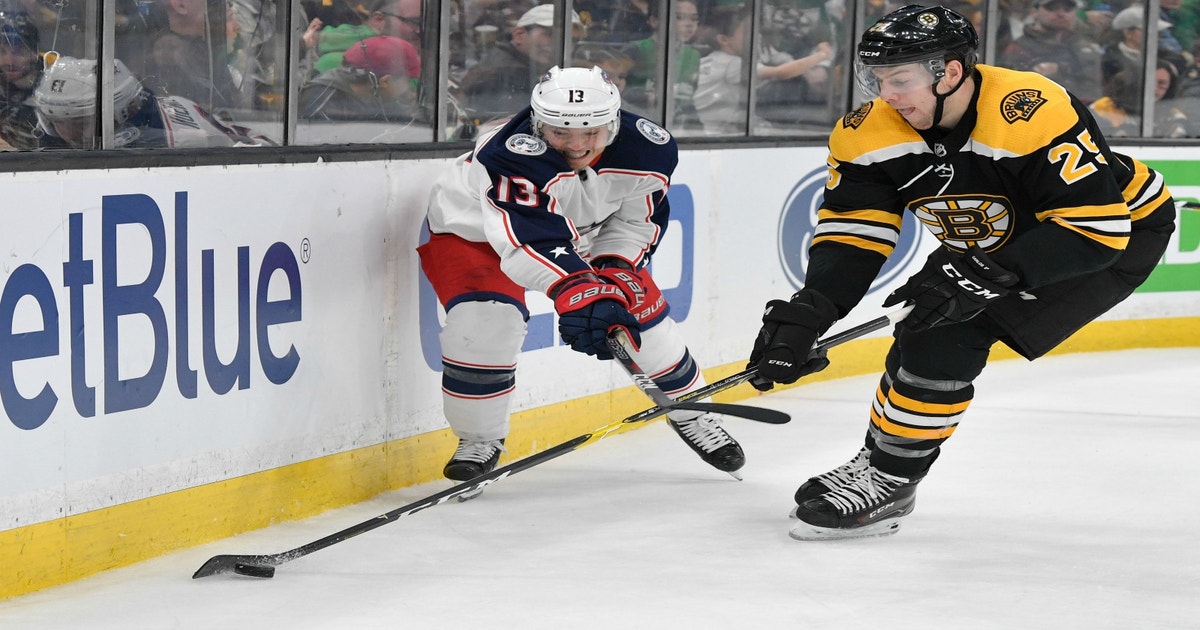 BOSTON (AP) — Brad Marchand scored 3:30 into the overtime, lifting the Boston Bruins to a 2-1 victory over the Columbus Blue Jackets on Saturday night.

The win snapped Boston’s three-game losing streak that came after it earned at least a point in 19 straight games. Patrice Bergeron had a power-play goal for the Bruins and set up the game-winner.

Bergeron spun around and fed Marchand in the right circle, where Marchand one-timed a shot as he went to one knee for his 15th OT goal, most in team history.

Backup goalie Jaroslav Halak made 24 saves for the Bruins. He kept it tied at 1 by making a glove stop on Zach Werenski’s wrist shot from the left circle with 5 minutes to play in the third.

Matt Duchene scored for the Blue Jackets, and Joonas Korpisalo made 31 saves.

In the OT, Marchand had two close chances for Boston after Halak robbed Duchene’s bid from the slot.

This matchup was much different than Tuesday, when the Blue Jackets jumped ahead 5-1 in Columbus before holding off the Bruins for a 7-4 victory.

With MMA fighter Conor McGregor in the building and firing up the crowd before making the ceremonial puck drop, the Bruins and Blue Jackets came out hitting and going end-to-end early before settling into a tight checking game.

Bergeron gave Boston a 1-0 lead with his goal 5:51 into the game, firing a backhander over Korpisalo for his 800th career point.

The Blue Jackets tied it when Duchene broke down the right wing, shifted around defenseman John Moore and lifted a shot over Halak’s shoulder inside the near post at 16:52 of the first period.

Boston had a handful of good chances in a scoreless second. The best came when Marchand had the puck all alone just outside the crease midway into the period, paused and waited for Korpisalo to drop before shooting it over the net.

NOTES: Columbus’ top goaltender Sergei Bobrovsky not only had the night off, he wasn’t in uniform and watched from the press box. … Linesman Brian Murphy worked his 2,000 game and was honored with a pregame ceremony, receiving team-signed jerseys from both clubs. … Bruins F Jake DeBrusk was back after missing the previous five games with a lower-body injury. … Boston TV personality Jayme Parker did the PA as part of NHL and NHLPA’s Hockey is for Everyone initiative. … The game was the nightcap of an NBA/NHL doubleheader. The Celtics beat the Atlanta Hawks in the afternoon. … The clubs meet again April 2 in Columbus.

With pre-St. Patrick’s Day excitement filling bars and restaurants outside TD Garden following the Celtics’ victory and about two hours before faceoff, the Bruins added some things to the festive night.

They also wore green jerseys during their pregame warmup, brought in members of the Boston police Gaelic Column of Pipes and Drums to play at turnstiles and gave out green hats to the first 5,000 fans.

McGregor got a big cheer when he was interviewed on the Jumbotron and there was a buzz every time he was seen in different parts of the building.

Blue Jackets: At Calgary on Tuesday, their second of a four-game road trip.

Bruins: Open a four-game trip at the New York Islanders on Tuesday.