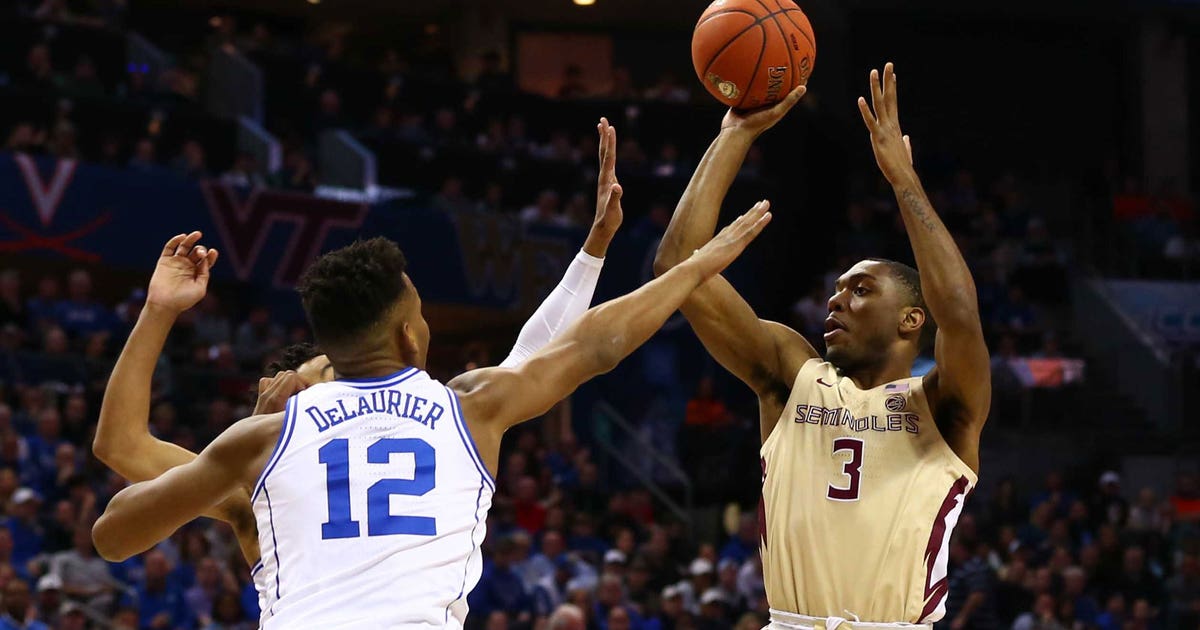 CHARLOTTE, N.C. (AP) — Zion Williamson proved he’s back and healthy with a dominating three-game show at the Atlantic Coast Conference Tournament. And that has fifth-ranked Duke celebrating yet another championship in its already-record haul.

Williamson had 21 points to help the Blue Devils beat No. 12 Florida State 73-63 on Saturday night in the championship game, giving Duke its 21st tournament title and sending the Blue Devils charging into the NCAA Tournament.

Williamson was named the tournament’s most valuable player, becoming only the sixth freshman to win the award and the first in a dozen years.

He averaged 27 points and 10 rebounds while making 33 of 43 shots in the three games — his first since suffering a knee sprain that had sidelined him for nearly six full games.

“For people who said I shouldn’t return,” Williamson said during the trophy presentation, “I couldn’t abandon my brothers and coaches like that.”

Williamson had broken into a wide grin with about 20 seconds left and Duke merely waiting on the horn to celebrate, then jumped into the air with teammates at the bench. That big smile flashed again as he cut down a strand of the net and turned back toward his teammates from the ladder above.

These moments — not the high-flying dunks or the jaw-dropping baseball-style bounce pass he threw ahead on the break for a second-half score — were the reason he came back.

“We’re freshman and you think you’re going to come in and dominate,” Williamson said. “But for us to actually come this far and win says a lot about how much we want to win.”

“They had 42 points in the paint,” Mann said. “So his ability to score in the paint and get offensive putbacks changes their game a lot. If they do have a bad shooting day, they can still score down low.”

RJ Barrett added 17 points and nine rebounds and the Blue Devils (29-5) took control after halftime, while point guard Tre Jones had his own strong outing with 18 points and six assists — all part of Duke’s closing act that showed the Blue Devils are ready for what’s ahead.

“I told them last night: ‘We’ve won a lot of championships but I haven’t won one with you,’” Krzyzewski said during the trophy presentation. “So to be in their moment is the very best thing.”

For Williamson, everything started with a quarterfinal win against Syracuse, with Williamson going for 29 points on 13-for-13 shooting in his first game back. Then came an even bigger performance in the semifinals: 31 points, 11 rebounds and the final-minute tip-in that ultimately helped Duke hold off third-ranked North Carolina in a rivalry classic.

He didn’t need to do as much this time, with Duke putting four players in double figures and shooting 58 percent after the break to a 36-all score into a 14-point lead by midway through the half.

Mfiondu Kabengele scored 14 points for the Seminoles (27-7). They upset No. 2 Virginia in Friday’s semifinals but couldn’t recover after falling behind big, getting no closer than five again.

“The main thing with us is that we beat ourselves,” Florida State forward Phil Cofer said. “Duke’s still a great team. But we can’t shoot that bad. And we missed some easy shots that we usually make.”

FSU: The Seminoles had been rolling since a 1-4 ACC start in January, winning 14 of 15 games with the only loss coming at third-ranked North Carolina. And they controlled most of the game against the Cavaliers, shooting nearly 57 percent to tear through Virginia’s stout defense. But by Saturday, they managed to stay right with Duke for a half before fading as the Blue Devils made their title-clinching move. FSU made just 8 of 32 shots (25 percent) after halftime as Duke’s defensive pressure caused problems, while the Seminoles’ defense had trouble getting its own stops as Duke got out in transition more.

Duke: This tournament was all about the 6-foot-7, 285-pound Williamson, whose Feb. 20 knee sprain — that included the image of his left foot tearing through the side of his shoe as he fell to the court — had threatened to derail the title potential of a team that has spent a national-best seven weeks at No. 1 in the AP Top 25. But Williamson’s return restored that confident edge that reaches throughout Duke’s lineup at both ends of the court, from his high-flying dunks to his rim-protecting leaps to swat away shots.

FSU: The Seminoles are headed to the NCAA Tournament, where they hope for another deep run like last year’s push to within a game of the Final Four. “We know that we’re national championship contenders,” Mann said. “We’ve got to keep that in mind and keep fighting.”

Duke: The Blue Devils have claimed the league’s automatic bid to the NCAA Tournament, possibly as the No. 1 overall seed.