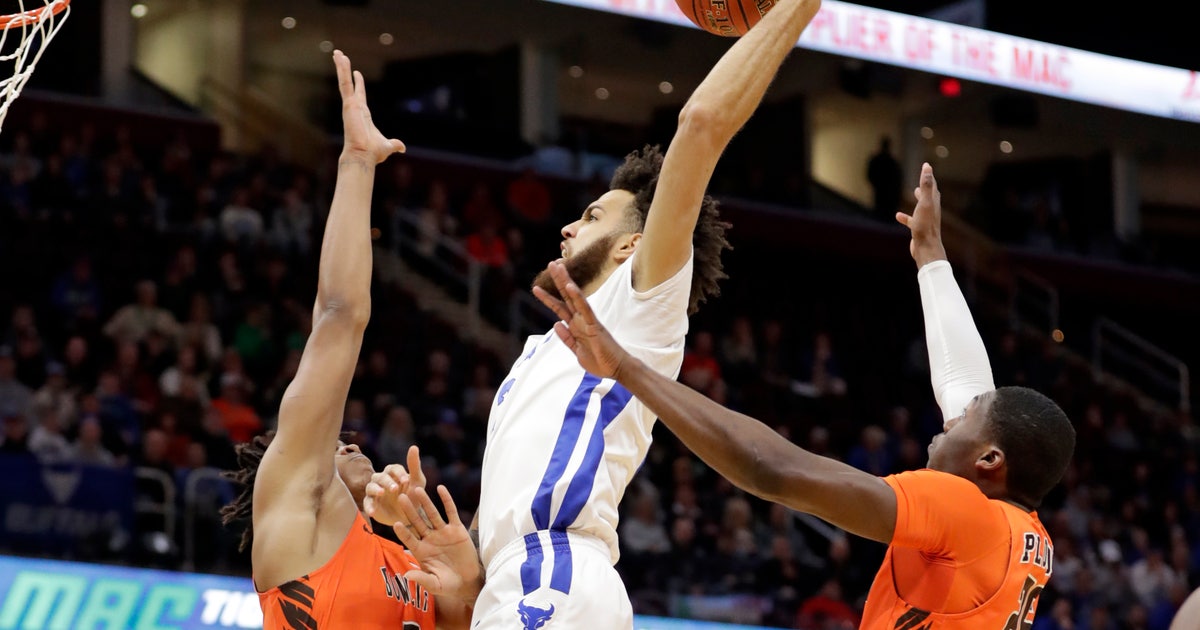 CLEVELAND (AP) — Jeremy Harris scored 31 points, C.J. Massinburg added 17 and No. 18 Buffalo won its fourth Mid-American Conference title in five years — and further stamped itself as a team to fear in the NCAA Tournament — by beating Bowling Green 87-73 on Saturday night.

But the Bulls showed their championship poise down the stretch and completed a three-day sweep at Quicken Loans Arena, a friendly home away from home for the past few years.

Buffalo’s five-year run atop the league is unprecedented in MAC history, and the title only boosts a resume that should make the Bulls the highest ever seeded MAC team when the NCAA brackets are unveiled Sunday.

Harris, a silky smooth left-hander, went 13 of 20 and was named the tournament’s MVP.

Jayvon Graves also added 17 points for the Bulls, who had to play the final four minutes without center Nick Perkins after he fouled out when he was called for a technical foul.

Bowling Green made three free throws to get within 74-71, but Graves hit a 3-pointer and Harris soon followed with one that hit the back of the rim and bounced high in the air before dropping through, sending Buffalo’s fans into a wild celebration.

The Bulls reeled off 12 straight points after Perkins went out and finally put away a Bowling Green team seeking the school’s first tourney title and NCAA berth since 1968.

Maybe next year. This one belongs to Buffalo — again.

Buffalo came in with an NCAA bid locked up, and while the Bulls’ dominance helps the MAC’s national reputation, it’s going to prevent the league from getting two teams in the NCAA Tournament. The MAC hasn’t had two schools in the 64-team field since 1999.

Down by 15, Bowling Green closed the first half with a 14-3 run to pull within one at halftime and take back all the momentum from Buffalo, which missed a chance to put the Falcons away and began settling for too many 3-pointers.

The second half went back and forth for 15 minutes until Buffalo again showed why it’s the class of the MAC.

Buffalo’s win completed a championship sweep by the school as the women’s team won the MAC title earlier in the day.

The MAC has felt slighted in recent years in getting only its conference champion into the NCAA field. Several schools with over 20-plus wins have been excluded.

“The last couple years we’ve been saying, ‘Geez we’re a pretty good league,’” Steinbrecher said, noting the rise in national power rankings. “We knew coming into this tournament we had a team that’s in, now the next step is we need multiple teams that come into the tournament and hopefully that’s the evolution. We’ll see if it comes to pass. I think we have the quality of teams that can do that if we take care of some of the other things.”

Buffalo: Racked up school records for wins, conference wins and went 14-0 at home, where they’ve won 26 straight. … Entered as one of three schools with 30 wins. Houston and Gonzaga are the others.

Bowling Green: In position for a postseason bid.

Buffalo: Waits for Sunday’s selection show and potentially as high as a No. 6 seed.