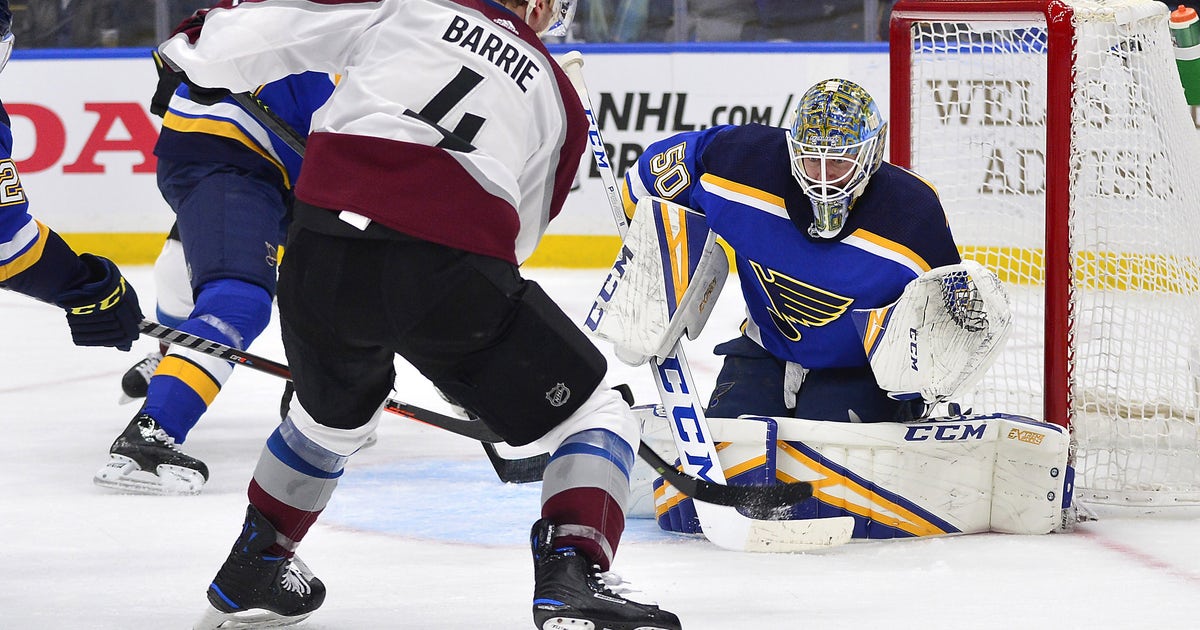 ST. LOUIS — Ryan O’Reilly scored the only goal in a shootout and the St. Louis Blues slowed Colorado’s playoff push with a 3-2 victory over the Avalanche on Monday night.

Trying to hold onto the final postseason spot in the Western Conference, the Avalanche had won four straight and were 6-0-1 in their previous seven games. They earned one point to move two ahead of Arizona for the second wild card in the West. Both teams have three games remaining.

Colorado is three points behind Dallas for the top wild card. By getting to 86 points, the Avalanche eliminated Edmonton from playoff contention.

Jaden Schwartz and Vladimir Tarasenko scored in regulation for the Blues, who improved to 7-1-0 in their last eight games. St. Louis has already wrapped up a playoff berth and still has a chance to win the Central Division. The Blues are tied with Nashville for second place, two points behind Winnipeg. All three teams have three games left.

Jordan Binnington made 24 saves in his 22nd win of the season, tying Jake Allen for the most by a Blues rookie goaltender.

Alexander Kerfoot and Gabriel Landeskog scored in the third period for the Avalanche.

O’Reilly scored on the Blues’ second attempt in the shootout. Colorado missed all three of its shots.

St. Louis improved to 2-2 in shootouts this season. Colorado fell to 2-2.

The Avalanche outshot the Blues 3-2 in overtime. For the game, St. Louis outshot Colorado 27-26.

The Avalanche tied it late in the third when Kerfoot scored at 19:13. Colorado had an extra man on the ice as Grubauer was pulled with 2:16 to play in the period. Kerfoot redirected in a shot from Landeskog, who scored earlier in the period.

Schwartz scored in the first period and Tarasenko scored early in the third for St. Louis.

Schwartz took a cross-ice pass from Oskar Sundqvist and tipped it in at 7:07 of the first period. It was the first goal in six games for Schwartz.

That goal made up for one that was taken away earlier. Tyler Bozak scored 1:40 into the game but the goal was disallowed. Bozak was ruled offside on the play.

Colorado got its first shot on goal at 14:47 of the first period. St. Louis outshot the Avalanche 15-2 in the period.

Neither team scored in the second as Colorado outshot the Blues 10-3.

Tarasenko gave the Blues a 2-0 lead just 14 seconds into the third. Tarasenko scored his 31st of the season when he put in a rebound of a shot by O’Reilly.

With that goal, Tarasenko into sole possession of fifth place in Blues history with 209 goals, passing Keith Tkachuk.

Colorado cut the lead to 2-1 when Landeskog scored on a deflection at 6:30. It was Landeskog’s 34th goal this season.

The win gave the Blues a season sweep over Colorado for the first time in team history. St. Louis did sweep the franchise four times when it was located in Quebec and called the Nordiques, with the last time coming in 1991-92. The Blues went 4-0-0 against the Avalanche this season, outscoring Colorado 12-5. At home, the Blues are 7-1-0 in their last eight games against Colorado.

NOTES: Avalanche C Nathan MacKinnon needs one goal to reach 40 for the first time in his career and two points to reach 400 in the NHL. Last season, he scored a career-high 39 goals. The last 40-goal scorer for Colorado was Milan Hejduk, who had 50 in the 2002-03 season. … St. Louis D Jay Bouwmeester needs one assist for 100 with the Blues. … Colorado forward Mikko Rantanen remains day-to-day with an upper-body injury. … Colorado had a streak snapped in the loss. The Avalanche had scored the first goal in their previous eight games and nine of their last 10 before Monday. … Linesman Tim Nowak officiated the game. It was his last game in a 26-year career that spanned 1,729 regular-season games and 114 playoff games. … Since Craig Berube took over as coach on Nov. 19, 2018, the Blues are 36-19-5.

Blues: At the Chicago Blackhawks on Wednesday.