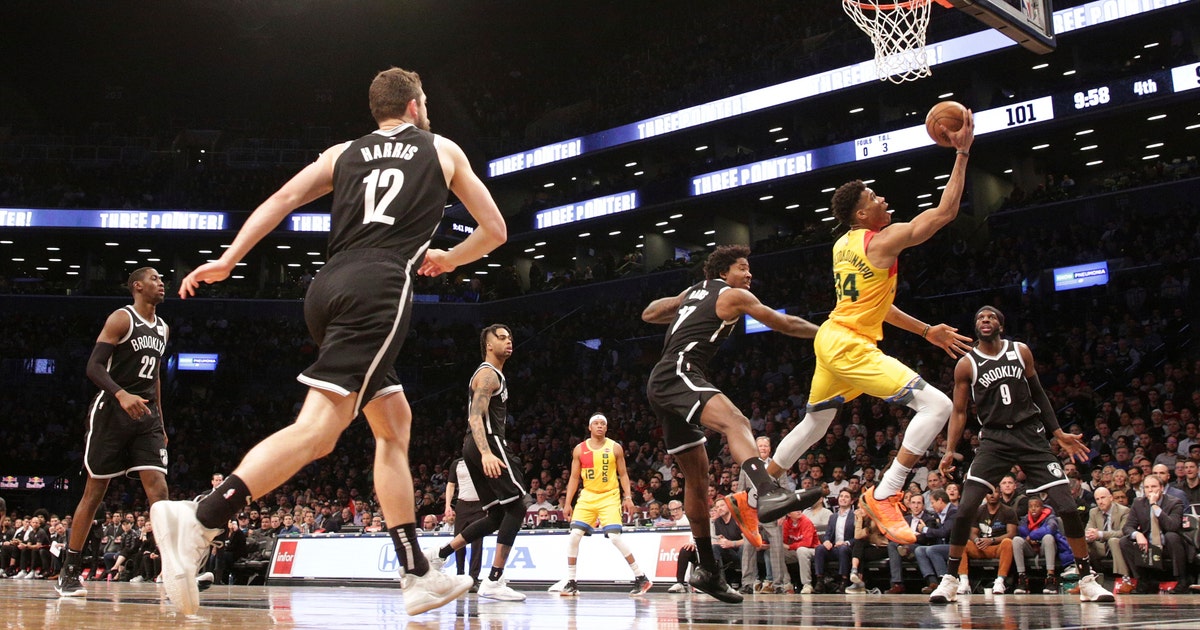 NEW YORK (AP) — Giannis Antetokounmpo had 28 points and 11 rebounds in his return to the lineup, Eric Bledsoe added 29 points and the Milwaukee Bucks beat the Brooklyn Nets 131-121 on Monday night.

Reserve guard George Hill chipped in 22 points while Brook Lopez and Sterling Brown each scored 14 for the Bucks, who played without All-Star forward Khris Middleton because of soreness in his left groin.

Milwaukee was unable to clinch the best record in the Eastern Conference because Toronto won earlier Monday.

D’Angelo Russell had 28 points and 10 rebounds for the Nets, who remained seventh in the East after losses by Detroit and Miami. Caris LeVert had 24 points off the bench.

BOSTON (AP) — Kyrie Irving had 25 points, including a pair of key late free throws, and Boston held off Miami.

Al Horford added 19 points, 11 rebounds and 10 assists for the Celtics (46-32), who are trying to beat out the Indiana Pacers for the No. 4 seed in the Eastern Conference standings.

Miami (38-39) maintained its half-game lead over Orlando for the final playoff spot in the East after the Magic’s 121-109 loss to Toronto.

The win also means Toronto can finish no lower than second in the Eastern Conference. The Raptors began the day three games behind Milwaukee for first.

Marc Gasol scored 13 points and Kyle Lowry had 12 as the Raptors snapped a two-game losing streak against the Magic.

Nikola Vucevic had 13 points and 13 rebounds, but the Magic lost for the second time in three games after winning their previous six. Evan Fournier scored 21 points. Orlando remained a half-game behind Miami for the eighth and final playoff spot in the East

It was a crucial win for the Pacers, who had lost seven of their previous eight and their grip on potentially having home-court advantage in the first round of the playoffs. Myles Turner chipped in with 17 points and five blocks.

Wayne Ellington scored a season-high 26 points and Andre Drummond had 18 points and 17 rebounds for the Pistons. Detroit is in the No. 6 spot with a 1 ½-game lead over Orlando for the final playoff spot in the East.

Gobert, who is second in the league with 62 double-doubles, controlled the paint as the Jazz built enough of a lead to withstand Walker, who scored 22 points in the fourth quarter.

Ricky Rubio added 20 points and 13 assists for the Jazz, who have won 10 of 11 and are two games back of Houston and Portland for the third and fourth slots in the Western Conference playoffs.

MINNEAPOLIS (AP) — Evan Turner had 13 points, 11 rebounds and 10 assists off the bench, and Portland moved into a tie for third place in the Western Conference with a victory over Minnesota.

Rodney Hood led Portland with 21 points. Enes Kanter added 20 points and 11 rebounds for the Blazers, who joined the idle Houston Rockets at 49-28.

Andrew Wiggins had 21 points for Minnesota, while Gorgui Dieng scored 18 on 7-of-8 shooting.

DALLAS (AP) — Justin Jackson scored 16 of his 24 points in the third quarter and Dallas took advantage of a short-handed Philadelphia lineup.

Philadelphia went more than 10 minutes without a field goal spanning the second and third quarters. Dallas took advantage to build a 20-point lead early in the third and protected it from there.

Jackson, acquired on Feb. 6 from Sacramento, had his highest point total with Dallas. He led a balanced Mavericks effort as leading scorer Luka Doncic sat out his second straight game with a thigh contusion.

PHOENIX (AP) — Devin Booker scored 25 points after two 50-point games and a 48-point night over the past three, and that was enough to lead Phoenix over Cleveland.

Booker sat more than eight minutes of the second quarter but had 13 assists. Josh Jackson had 19 points and 10 rebounds, and Jamal Crawford added 19 points for the Suns.