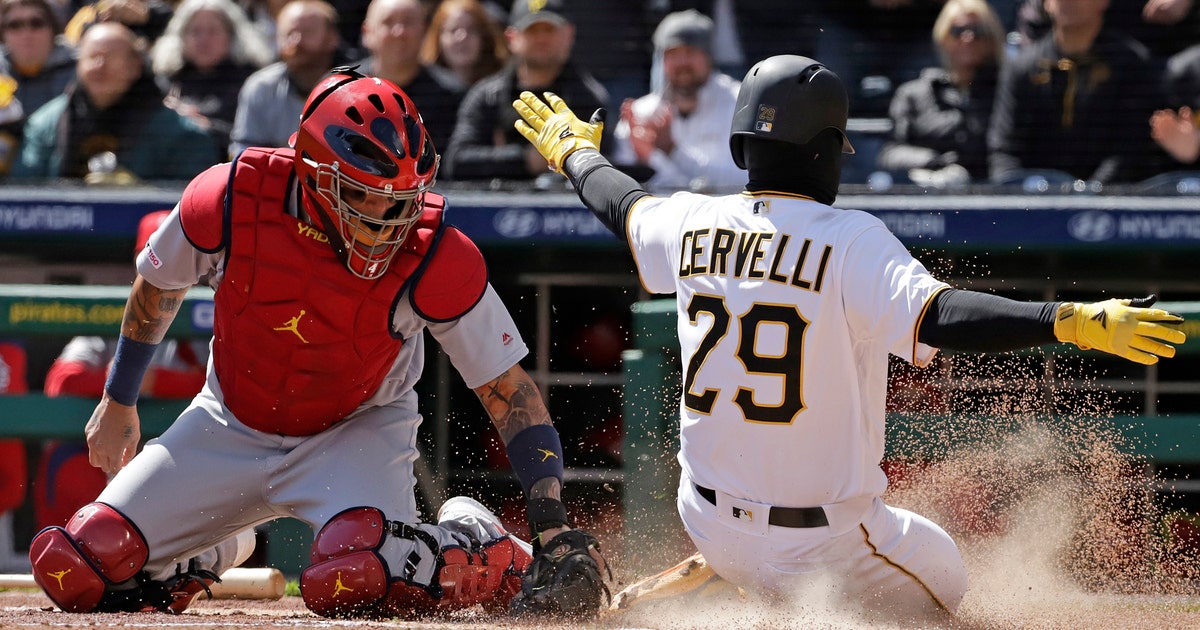 PITTSBURGH (AP) — Paul DeJong scored on a passed ball in the top of the 11th inning as the St. Louis Cardinals rallied past Pittsburgh 6-5 on Monday to spoil the Pirates‘ home opener.

The Cardinals came back twice against Pittsburgh’s erratic bullpen, tying it in the eighth and again in the ninth.

DeJong put St. Louis in front for the first time when he singled off Steven Brault (0-1) with two outs in the 11th, moved to third after a hit by pitch and a walk and then raced home when Nick Kingham’s fastball squirted past Pirates catcher Francisco Cervelli.

Jordan Hicks (1-1) worked two scoreless innings. John Gant picked up the save despite issuing a one-out walk to finish a sloppy 4-hour, 53-minute marathon that featured 16 pitchers, 16 walks, four hit batters, three errors and two home plate umpires. Crew chief Jerry Layne left in the seventh after taking a ball off the mask and was replaced by Vic Carapazza.

Josh Bell drove in two runs for Pittsburgh, and Chris Archer struck out eight and allowed just two hits in five shutout innings in his 2019 debut. Archer exited with a 4-0 lead only to watch the bullpen give it away.

The Cardinals got within 4-3 in the seventh when Wong went deep off Richard Rodriguez and Keone Kela walked in a run. St. Louis drew even in the eighth when Yairo Munoz led off the eighth with a soft infield single, moved to second on Nick Burdi’s wild pitch and then scored on O’Neill’s double down the left-field line.

The Pirates went back in front in the bottom of the eighth when Colin Moran hit a solo shot to the seats in right field. Moran, who hit a grand slam in Pittsburgh’s 2018 home opener, finished 2 for 3 with three RBIs. The Cardinals pulled even in the ninth off closer Felipe Vazquez when DeJong scored on Jose Martinez’s double to the gap in right-center.

St. Louis starter Adam Wainwright, hoping to bounce back after an injury-plagued 2018, struggled with his command. The 37-year-old walked four — three in the first inning alone — and gave up four runs on four hits in four innings while throwing just 37 of his 73 pitches for strikes.

Archer, who had an uneven two months to finish 2018 after arriving in Pittsburgh following a rare high-profile trade deadline deal with Tampa Bay, provided the sellout crowd with a jolt. Mixing his fastball and slider effectively, he kept the Cardinals off balance but needed 99 pitches to get 15 outs.

Cardinals: IF Jedd Gyorko should be ready to return from a strained right calf in time for Thursday’s home opener against San Diego. The injury limited Gyorko to just five games during spring training.

Cardinals: Miles Mikolas (0-1, 9.00 ERA) will make his second start of the season when the teams meet on Wednesday. The 30-year-old allowed five runs in five innings in a loss to Milwaukee on opening day.