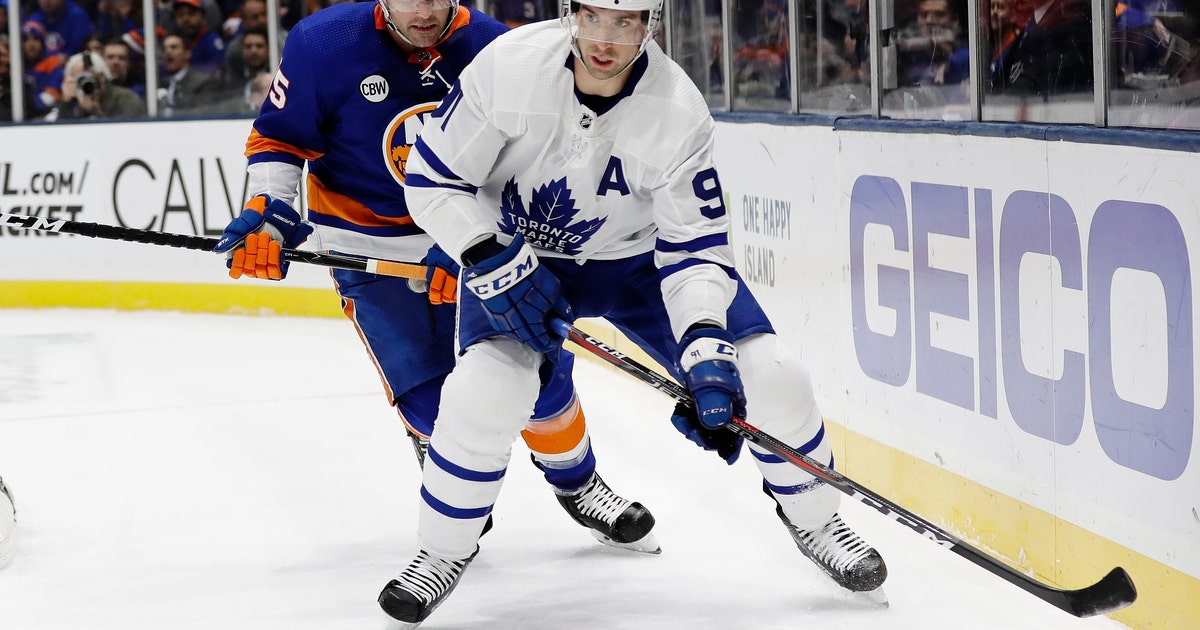 UNIONDALE, N.Y. (AP) — John Tavares scored against his former team and the Toronto Maple Leafs clinched a playoff berth with a 2-1 victory over the New York Islanders on Monday night.

Calle Rosen also had a goal for Toronto, which needed just one point to secure its postseason spot and won for the fourth time in 11 games (4-5-2). Frederik Andersen stopped 28 shots.

Tavares, held without a point while the Maple Leafs lost by a combined 10-1 margin in his first two games against the Islanders since leaving last summer to sign with his hometown team, broke through off a pass from Mitch Marner to make it 2-0 at 3:50 of the third period. Tavares added to his career best with his 46th goal and set a career high with his 87th point.

Jordan Eberle scored and Robin Lehner finished with 36 saves for the playoff-bound Islanders, who were playing their final regular-season home game.

New York squandered a chance to pull within a point of first-place Washington in the Metropolitan Division. Instead, the Islanders remained three points behind the Capitals and two ahead of third-place Pittsburgh. The Capitals and Islanders each have two games remaining — including the season finale at Washington on Saturday night. The Penguins have three games left.

SUNRISE, Fla. (AP) — Vincent Trocheck scored two goals, including his 100th in the NHL, and Florida withstood a late surge to beat Washington.

Troy Brouwer, Jonathan Huberdeau and Frank Vatrano also scored for the Panthers, and Aleksander Barkov had three assists. Barkov has 94 points this season, tying Pavel Bure for the franchise record set in 1999-00.

Roberto Luongo made 27 saves as the Panthers won their third straight game.

The Capitals had their four-game winning streak snapped and missed a chance to clinch their fourth straight Metropolitan Division title.

Trying to hold onto the final postseason spot in the Western Conference, the Avalanche had won four straight and were 6-0-1 in their previous seven games. They earned one point to move two ahead of Arizona for the second wild card in the West. Both teams have three games remaining.

Colorado is three points behind Dallas for the top wild card. By getting to 86 points, the Avalanche eliminated Edmonton from playoff contention.

Jaden Schwartz and Vladimir Tarasenko scored in regulation for the Blues, who improved to 7-1-0 in their last eight games. St. Louis has already wrapped up a playoff berth and still has a chance to win the Central Division. The Blues are tied with Nashville for second place, two points behind Winnipeg. All three teams have three games left.

Jordan Binnington made 24 saves in his 22nd win of the season, tying Jake Allen for the most by a Blues rookie goaltender.

Alexander Kerfoot and Gabriel Landeskog scored in the third period for the Avalanche.

CHICAGO (AP) — Kevin Hayes scored at 3:38 of overtime and Winnipeg beat Chicago to snap a three-game slide and move into sole possession of first place in the Central Division.

Hayes cut to the net off the right side, got past Dylan Strome and tucked a shot past goalie Corey Crawford. The playoff-bound Jets improved to 96 points, two ahead of St. Louis and Nashville atop the crowded division race.

Strome scored his second goal of the game with 2:20 left in the third period to tie it at 3. By earning a point, Chicago avoided being eliminated from playoff contention for the second straight season — for now.

Jack Roslovic scored two goals to end a 22-game drought, and Adam Lowry also had a goal for the Jets. Connor Hellebuyck made 25 saves.

Jonathan Toews had a goal and an assist for Chicago and set a career high for points with 78. The 30-year-old Chicago captain’s 34th goal tied his mark for one season, set in 2008-09.

Crawford stopped 34 shots, including Mark Scheifele’s penalty shot 40 seconds into the second period, but Chicago lost for the third time in its last four.

OTTAWA, Ontario (AP) — Yanni Gourde had two goals and an assist, and Tampa Bay became the third team in NHL history to win 60 games in a season with a victory over Ottawa.

Brady Tkachuk and Max Veronneau scored for the Senators. Craig Anderson, playing in his 400th game with the Senators, stopped 21 shots.

NEWARK, N.J. (AP) — Devils defenseman Connor Carrick scored with 4:10 left to break a tie and New Jersey defeated New York to avoid being swept in the season series by its longtime rival.

Brett Howden and Filip Chytil scored for the Rangers, who won the first three meetings. Henrik Lundqvist made 37 saves in losing his fifth straight decision.

The game was chippy with three fights, including a one-shot bout in which Brandan Lemieux bloodied Wood.