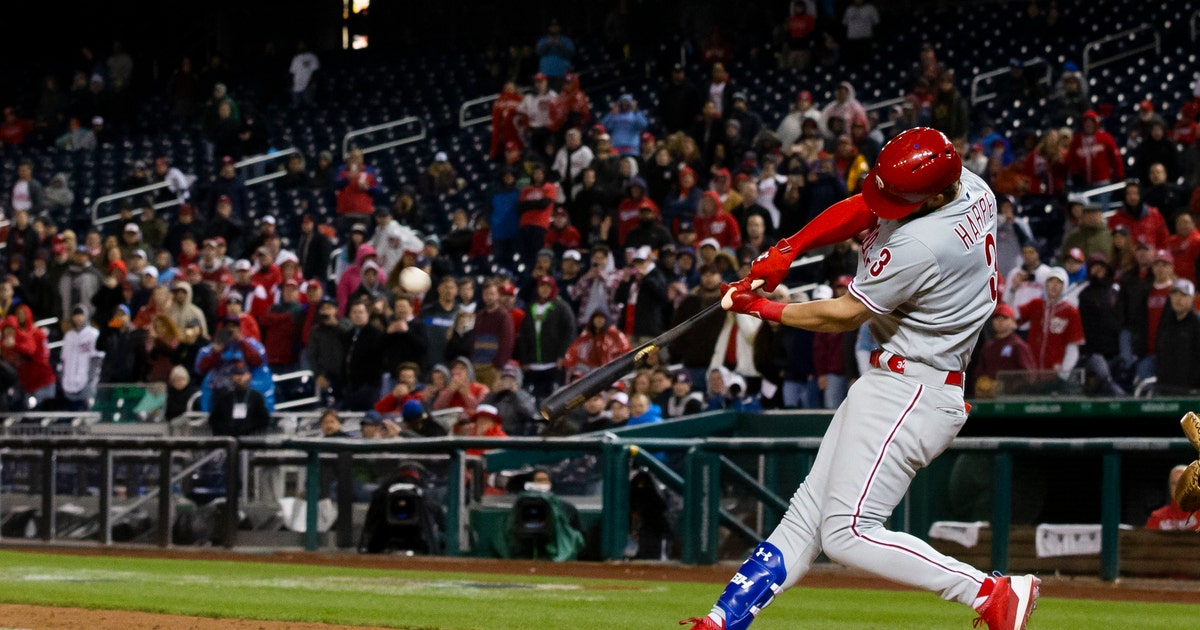 WASHINGTON (AP) — Bryce Harper crushed a long home run for his third hit while performing to jeers in his return to Washington, and the Philadelphia Phillies beat the Nationals 8-2 Tuesday night for the franchise’s best start in over a century.

Maikel Franco also homered for the Phillies, baseball’s only undefeated team at 4-0. They had only done that in 1915 and 1897.

Harper left Washington after playing 927 games over seven years, participating in six All-Star Games and winning the 2015 NL MVP Award. He listened to what the Nationals had to offer, then signed a $330 million, 13-year contract with the rival Phillies in February.

Harper hasn’t wasted any time providing returns for the investment. He has three homers and five RBIs in four games, along with a .429 batting average. He drove in three Tuesday.

Booed during every at-bat, Harper thumped a “take that,” 458-foot shot in the eighth inning off Jeremy Hellickson. As the ball soared toward the second deck in right field, Harper flipped his bat and circled the bases with delight before celebrating with his new teammates in the visiting dugout.

Zach Eflin (1-0) struck out nine and allowed three hits over five scoreless innings. He outdid Max Scherzer (0-2), who allowed one earned run in five innings and struck out nine.

Nationals shortstop Trea Turner was hit by a pitch and broke his right index finger while trying to bunt. He’s out indefinitely.

SAN DIEGO (AP) — Zack Greinke hit a career-best two homers and struck out 10 in six innings to rebound from a rocky opening day, and Arizona beat San Diego in a wild game that included an unusual batter’s interference call on Manny Machado.

Machado was called out in the sixth inning after dropping his bat near Murphy while the Diamondbacks catcher tried to catch a popup, a disputed decision that led to Padres manager Andy Green’s ejection.

Eric Lauer (1-1) allowed the first of Greinke’s homers. Greg Holland pitched the ninth for his second save.

OAKLAND, Calif. (AP) — Mike Fiers gave Oakland another stellar start, center fielder Ramon Laureano threw out a baserunner for a second straight game and the Athletics made Matt Chapman’s homer stand in a win over Chris Sale and Boston.

Fiers (2-1) pitched six innings of five-hit ball. Oakland starters have allowed just one run over 36 innings in the last six games since the team returned from an 0-2 trip to Tokyo. The A’s have won four straight and five of six.

The World Series champion Red Sox dropped their fourth straight and fell to 1-5. Laureano threw out Xander Bogaerts at third trying to stretch a double off the wall with one out in the ninth off closer Blake Treinen. Bogaerts had fouled a pitch off his ankle earlier in the at-bat.

LOS ANGELES (AP) — Cody Bellinger hit a grand slam off Madison Bumgarner (0-2) in the third inning, the sixth consecutive game Los Angeles has homered in to start the season.

The Dodgers have slugged 17 homers so far, tied with the Seattle Mariners for most in the majors. They matched the franchise record for homers in six straight games to start a season, set by the 1954 Brooklyn Dodgers.

Hyun-Jin Ryu (2-0) allowed two runs and six hits in seven innings. He struck out five and walked none. He was the fifth left-hander in six games that the Giants have faced.

The Dodgers survived a messy ninth by closer Kenley Jansen, who eked out his second save.

SEATTLE (AP) — Marco Gonzales pitched into the ninth inning after Dan Vogelbach hit a tiebreaking homer in the eighth, lifting Seattle over Los Angeles to move to 7-1 for the first time in franchise history.

Gonzales (3-0) was hoping to pitch the first complete game in baseball this season, but a one-out walk to Mike Trout and a single to center by Andrelton Simmons ended his night.

Anthony Swarzak, who came off the injured list Tuesday, earned the save in his first appearance of the season by striking out Albert Pujols and getting Jonathan Lucroy to ground out to second.

Joe Jiménez (1-0) worked a hitless eighth and ended the inning with an unassisted double play after snagging Gleyber Torres‘ line drive and jogging to first base himself.

Shane Greene tossed a 1-2-3 ninth for his third save.

Chapman (0-1) walked pinch-hitter Niko Goodrum with one out in the ninth and he scored easily from first when Peterson doubled over the head of left fielder Mike Tauchman.

CINCINNATI (AP) — Orlando Arcia ended his season-opening slump with a three-run homer and Milwaukee extended its domination of Cincinnati.

Milwaukee has won the first two games of the series and 15 of 21 against Cincinnati over the last two seasons. The defending NL Central champions are off to a 5-1 start, one game better than a year ago when they tied the club record with 96 wins.

Arcia was 0 for 16 when he connected off Michael Lorenzen , who was brought in to face the shortstop with two outs in the sixth inning after left-hander Zach Duke (1-1) gave up a walk and a single. Arcia’s opposite-field homer barely cleared the wall in right field and snapped a 1-1 tie.

Jhoulys Chacin (2-0) gave up three hits and a pair of runs in 5 1/3 innings, including Eugenio Suarez’s RBI double . Suarez added a solo homer off Junior Guerra in the eighth. Josh Hader got his fourth save.

TORONTO (AP) — Andrew Cashner pitched six shutout innings, and Baltimore extended its a road winning streak to four for the first time since 2016 before another small crowd at Rogers Centre.

Jonathan Villar had two hits and scored once for the Orioles, who improved to 4-1. Coming off a 115-loss season, the Orioles opened by winning two of three at the New York Yankees. They strung together four road wins for the first time since July 5-16, 2016, at the Los Angeles Dodgers and Tampa Bay.

Boosted by a $1 hot dog promotion, the game drew 12,110, up from 10,460 in Monday’s series opener, Toronto’s smallest crowd since 2010. Baltimore had lost 10 straight at Toronto coming into the series.

Cashner (1-1) allowed four hits, all singles, struck out three and walked three. He stranded the bases loaded in his final inning when Rowdy Tellez flied out on his first pitch. Miguel Castro got his first save despite allowing Tellez’s second homer this season.

Trevor Story had singles in the fifth and seventh innings for Colorado’s only hits. The Rockies have lost four straight and scored only one run in their last 30 innings. They never got a runner as far as second base against Snell and reliever Wilmer Font, who closed with two hitless innings.

Wilson Ramos and Dominic Smith each had two hits and an RBI for the Mets, who improved to 4-1 for the second straight year. Jason Vargas (1-0) allowed two runs in five innings in his season debut. The Marlins went 1 for 10 with runners in scoring position against him.

The Marlins had 16 hits but left 14 runners on base. Jorge Alfaro went 0 for 4 and stranded seven, including the potential tying run at third when he struck out against Justin Wilson to end the eighth inning. Wilson hit a batter and allowed a single in the ninth but earned his first save since 2017 when Rosario caught Miguel Rojas‘ line drive and doubled off Lewis Brinson at second base.

The Rangers (3-2) are over .500 for the second time this season in manager Chris Woodward’s managerial debut. They never had a winning record at any point last year.

Rougned Odor started the seventh inning in a 4-4 game with a bunt single that was beyond the reach of lefty Framber Valdez (0-1) coming off the mound. Elvis Andrus had a double before Gallo pulled a hard one-out grounder that split between second baseman Jose Altuve and first baseman Yuli Gurriel.

Shawn Kelly (2-0) threw 1 1/3 innings in his third appearance for the Rangers. Jose Leclerc worked a perfect ninth for his second save. Asdrubal Cabrera homered for the third time.

Cruz appeared to ground out against reliever Brad Boxberger (0-1) with runners on first and second when third base umpire James Hoye signaled his chopper fair. But plate umpire Mark Ripperger came in and signaled it was foul, and after the two umps visited it was Ripperger’s call that stood. Cruz followed a couple pitches later with his third RBI of the game.

Trevor Hildenberger (1-0) got the final out of the ninth inning for Minnesota, and Blake Parker worked around a two-out walk in the 10th to earn his first save.