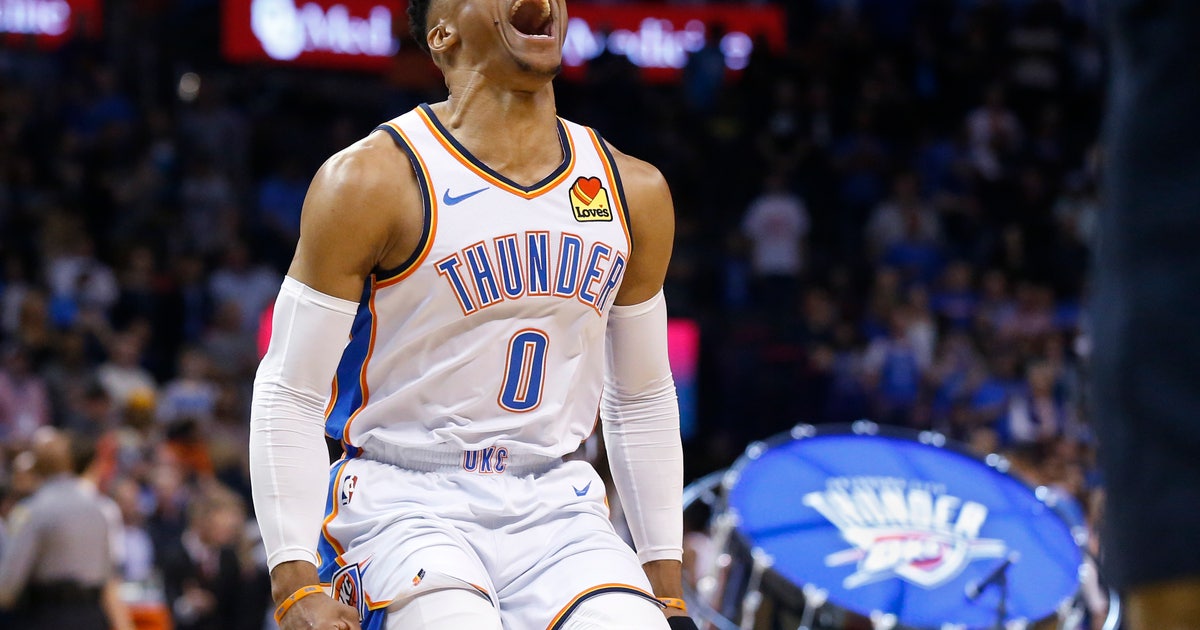 Westbrook clinched the mark with a rebound in the final minute, drawing a large ovation from the home crowd. He finished with 20 points, 20 rebound and 21 assists.

Wilt Chamberlain is the only other player to accomplish the feat. He had 22 points, 25 rebounds and 21 assists in a game in 1968.

It looked as if Westbrook’s chance at the mark passed by just before the decisive rebound, as the ball bounced off his fingertips and away. But at the other end, he grabbed a miss by Lance Stephenson.

It was Westbrook’s 31st triple-double of the season and brought him to within three assists — assuming he plays in each of the last four games — of averaging a triple-double for the third consecutive season.

Westbrook had at least 15 points, 15 rebounds and 15 assists for the eighth time in his career, tying Chamberlain for second-most all-time. Oscar Robertson had 14 such games in his career.

Oklahoma City had struggled in the first half recently, trailing in eight consecutive games entering Tuesday.

The Thunder, despite leading by as many as 11 points early, looked to be heading toward another halftime deficit when Kentavious Caldwell-Pope put the Lakers ahead with a 3-pointer late in the second quarter.

But Oklahoma City closed the half with an 11-6 run and took a 59-55 lead into halftime.

Though Westbrook struggled from the field early — missing 12 of his first 14 shots — he was effective on the offensive end from the start, with 10 first-quarter assists.

Westbrook finished 8 of 23 from the field as Oklahoma City won for the third time in its last 10 games.

Caldwell-Pope led the Lakers with 23 points.

The loss was Los Angeles’ second in the last six games despite playing with a roster missing its stars.

Lakers: Power forward Kyle Kuzma missed his second consecutive game with left foot tendinitis. Kuzma was joined by LeBron James, Lonzo Ball, Brandon Ingram, Josh Hart and Tyson Chandler as Lakers missing the game due to injury. . Before the game, rapper Nipsey Hussle’s music was played in the Lakers’ locker room. The musician was shot and killed in Los Angeles on Sunday.

Thunder: Thunder center Steven Adams briefly left the game before halftime after being fouled by Moe Wagner. Adams told trainers he couldn’t hear out of his right ear. He shot free throws before heading into the locker room. Adams started the second half. . Earlier Tuesday, the NBA rescinded the technical foul Russell Westbrook received Sunday in a loss to Dallas. It would’ve been Westbrook’s 17th of the season, pushing him one away from a second one-game suspension. . The Thunder have trailed at halftime in 17 of their 20 games since the All-Star break. . Former Thunder guard Alex Abrines, who was released in early February, was at the game as a spectator.