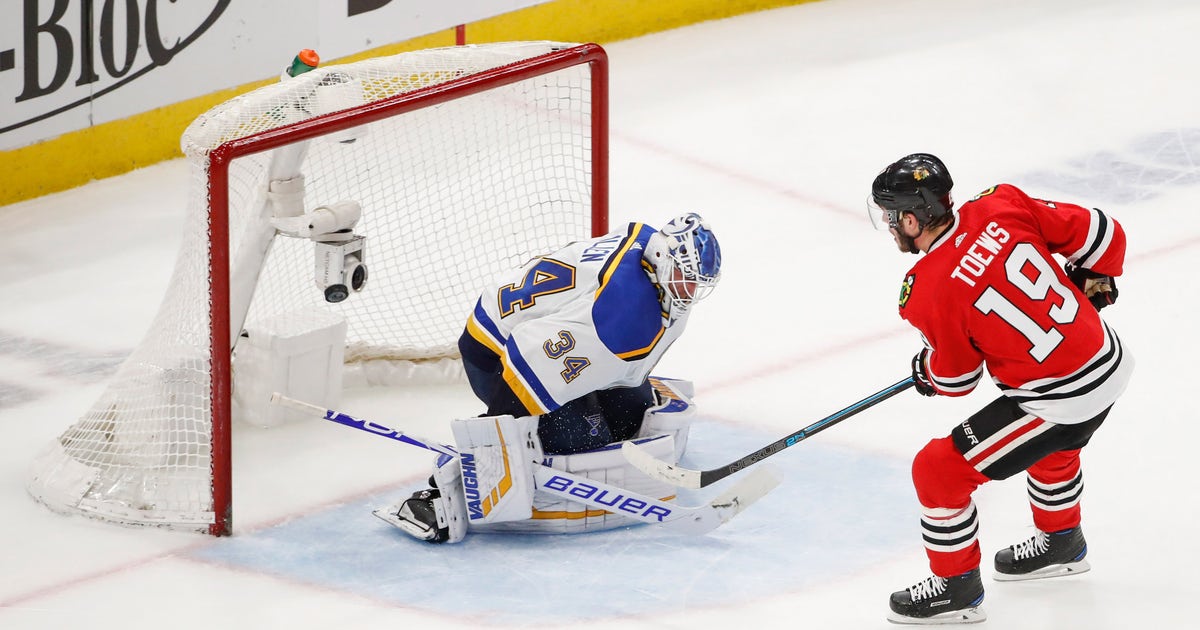 CHICAGO  — Jonathan Toews scored the lone goal in the shootout after connecting for his career-high 35th in regulation, and the Chicago Blackhawks beat the St. Louis Blues 4-3 on Wednesday night.

Patrick Kane had a goal and an assist to set a career high for points at 107. Cam Ward stopped 37 shots through overtime and all three Blues shooters in the tiebreaker.

Tyler Bozak stuffed in a rebound with 38.9 seconds left to tie the game at 3 and send it to overtime as St. Louis rallied from a two-goal deficit in the third period.

Vladimir Tarasenko and David Perron also scored for St. Louis, which improved to 95 points, but missed an opportunity to climb into a tie for first place in the Central Division with idle Winnipeg and Nashville, both of which have 96. The three teams have all clinched playoff spots and each has two games remaining.

Ward was strong in his first start in a month. Corey Crawford had started 13 straight games for the Blackhawks, who were eliminated from playoff contention for the second straight season on Tuesday night when Colorado beat Edmonton.

Toews opened the scoring with 3:34 left in the first. He drove to the net and tapped Kane’s pinpoint backhand pass from the lower right circle past Allen’s left pad.

Tarasenko tied it at 1 just 26 seconds into the second period. After cruising into the Chicago zone on a 2-on-1 break with Ryan O’Reilly, Tarasenko fired a rising shot from the left side over Ward’s glove and into the upper right corner of the net for his fifth goal in five games against Chicago this season.

Anisimov put Chicago back in front 2-1 on a deflection with 6:40 left in the period, moments after Ward stopped Jaden Schwartz from the slot with a glove save.

Dominik Kahun carried the puck down the right wing and into the Blues zone. He cut to the slot, shot and Anisimov redirected the puck past Allen’s left pad.

Kane broke in alone and roofed a backhand just under the crossbar with 8:23 left in the third to make it 3-1. Perron replied with a power-play goal from the right circle 46 seconds later to trim Chicago’s lead to 3-2.

Allen made a point-blank save on Brandon Saad midway through overtime.

NOTES: The Central Division rivals met for the fifth and final time this season, but for the first time since Nov. 14, 2018. … Blackhawks D Dennis Gilbert made his NHL debut after being recalled from Rockford of the AHL on Wednesday. … Kahun returned after missing a game with a facial injury. … The Blackhawks honored Hall of Fame brothers Tony and Phil Esposito with a “One More Shift” salute before the game. Both skated on to the ice and joined their former team during the national anthem. Tony Esposito debuted with the Blackhawks as a Calder Trophy winner in 1969-70 following a trade from Montreal and tended goal for Chicago for 15 seasons. Phil Esposito played his first four seasons in Chicago before being traded to Boston where he led in the NHL in goal scoring over six straight seasons.