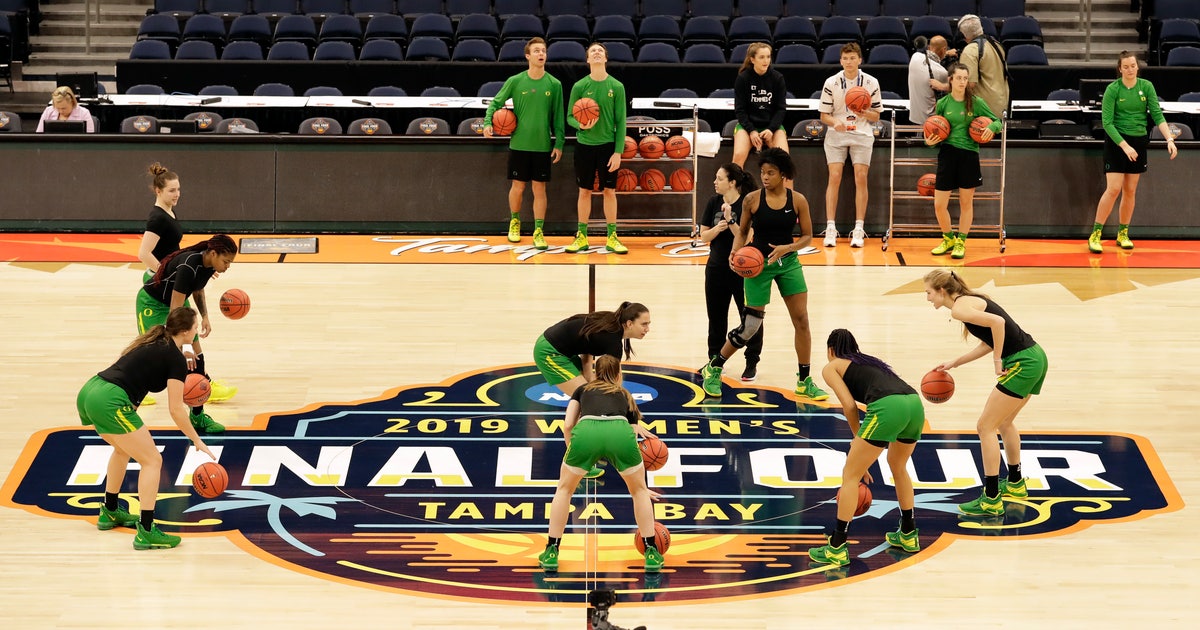 TAMPA, Fla. (AP) — Kim Mulkey rejects the notion that being the No. 1 overall seed makes Baylor the team to beat in the women’s Final Four.

The Lady Bears (35-1), who are riding a 27-game winning streak and have trounced four opponents in the NCAA Tournament by an average of 38 points, face Final Four newcomer Oregon (33-4) in Friday’s national semifinals.

The winner advances to Sunday’s championship against either UConn or Notre Dame.

Mulkey, who’s won titles as a player and an assistant coach at Louisiana Tech in addition to guiding Baylor to a pair of NCAA crowns, said it would be a mistake to assume the Lady Bears are clearcut favorites.

“We don’t approach it like: ‘Oh, wow, we’re the No. 1 seed, we’re supposed to win.’ According to a lot of people, we’re not supposed to win,” Mulkey said.

Oregon promises as much.

Led by All-American point guard Sabrina Ionescu, the Ducks are in the Final Four for the first time after upsetting another No. 1 seed, Mississippi State, in the Elite Eight.

“We’re honored and humbled to be here, but I think we all know we don’t want to go home tomorrow,” Ionescu said after practice Thursday at Amalie Arena. “We didn’t just come here to enjoy the experience. We came here to win some more basketball games.”

Baylor is back in the Final Four for the time since 2012, when it finished a 40-0 season and captured its second national title.

The Lady Bears are led by an imposing frontcourt featuring 6-foot-4 Lauren Cox and 6-7 Kalani Brown and use their size to dominate on both ends of the floor.

“Steph Curry gave Sabrina quite a shout out yesterday, I thought that was really cool,” Graves said. “You know what, yeah, she’s a lot like Steph, how he’s a conductor, is always a threat to make a huge play, make those 3-pointers.”

“We work from the inside out, and I think they work from outside in,” Bickle added. “So we’re just kind of opposite.”

Mulkey said teams generally play do whatever they feel is necessary to be successful.

“You play to your personnel,” the Baylor coach said.

“I guess you could call me old, if you want to. You can call me old-fashioned. I’m good with all of it,” Mulkey added. “I just play to win.”

“I think our defense is special, ” Mulkey said, adding it may be the most underrated aspect of Baylor’s success.

“Yes, we’ve scored a lot of points in these playoff games, which we’re very capable of doing,” she added. “But we don’t know we’re going to do that every night. I don’t think any team can go and think how many points are we going to score. Our approach is we know what we can do defensively.”

Oregon figures to have its hands full, too, defensively.

“They’re not just tall, they’re skilled,” Graves said. “It looks like sometimes they play volleyball with each other. They’re just throwing it up and over the opponents.”

Mulkey doesn’t want to reveal Baylor’s game plan, but said it’s no secret the Lady Bears have to contain Ionescu.

“That’s where I start and probably stop in answering your question,” Mulkey said. “All those kids know she makes them better. She’ll get the ball to them in spots where it makes them look good. She certainly is not the only great player on that team, but it starts and stops with her.

Geno Auriemma, which has UConn in the Final Four for the 12th consecutive years, said this week that he feels Notre Dame — the Huskies’ opponent in the semifinals — has the best team in the country.

Baylor hasn’t lost since before Christmas and has been barely challenged in the NCAA tournament.

Still, Mulkey has no interest in posting Auriemma’s comment on a bulletin board.

“Look, timing is everything in life. … We just kept winning, everybody else would lose a conference game or conference tournament game, so we were the fortunate ones to be selected as the overall No. 1 seed,” Mulkey said. “It really doesn’t motivate me. It doesn’t offend me.”

Mulkey has fond memories of playing for the national championship as a player under Hall of Fame coach Leon Barmore at Louisiana Tech.

On Thursday, she recalled beating USC by 16 points in the semifinals and the scene in the victorious locker room, where Barmore tossed around some trash cans while addressing the team.

“But we loved it. He knew we were that close to a national championship, and it was just the intensity of the moment,” Mulkey said. “What’s wrong with that? Right? He got our attention. Here I am 56 years old and I remember the moment. We can laugh about it, talk about how wonderful it was. But he got us ready for that championship game.”