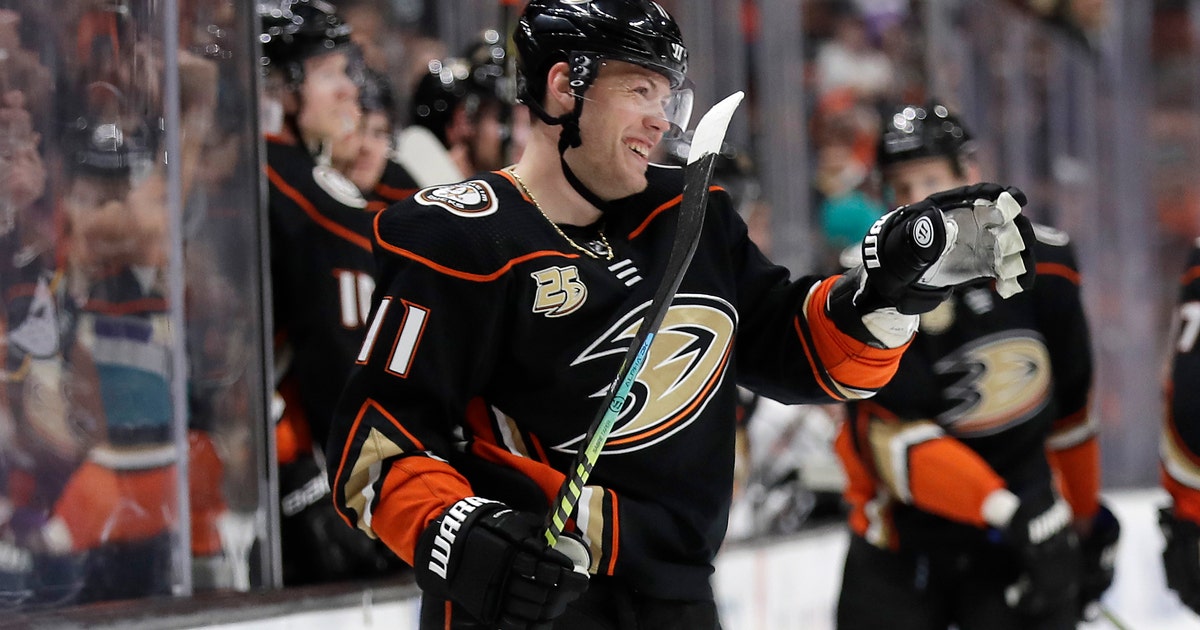 Daniel Sprong, Carter Rowney and Jakob Silfverberg also scored, and John Gibson made 44 saves as the Ducks earned their first victory in four games in this season’s Freeway Faceoff rivalry.

Michael Amadio and Carl Grundstrom scored and Jack Campbell stopped 28 shots for the Kings, who have the NHL’s second-worst record with one game to play — one point fewer than New Jersey.

Rookie Max Jones had two assists in his first career multi-point game for the Ducks (35-37-10), who surged to finish with 80 points, matching the franchise’s lowest total in a full season since 2004.

Although the Kings have one more game, this Freeway Faceoff was a simultaneous farewell to a season that ended a seven-year renaissance for these local rivals.

After both teams were swept out of the first round in last spring’s playoffs, Los Angeles struggled from the start this season, finally unable to use its grit and defensive acumen to compensate for years of offensive stagnation.

Anaheim was firmly in the playoff race until the week before Christmas, when injuries and a mystifying goal drought led to a 5-21-4 slump.

The Ducks began their rebound too late to get back in the race, while the Kings have remained the Western Conference’s worst team for many weeks despite five victories in their previous eight games.

Both teams are likely to have new coaching staffs in the fall after they fired their head coaches to little avail during the season, and both are hoping for good news in the draft lottery Tuesday. Anaheim general manager Bob Murray finished with a 14-11-1 record behind the bench after firing Randy Carlyle and installing himself as the interim coach.

A sellout crowd still turned out at Honda Center to wrap up the season, and the two lowest-scoring teams in the NHL managed to produce some entertainment.

After Amadio converted a fat rebound for the game’s first goal, Rowney scored on a blind pass from Jones to even it.

The Ducks went up 2-1 when Holzer slammed home a pass from Jones for the veteran German defenseman’s first NHL goal since April 2, 2017, and just his fifth over seven NHL seasons with Toronto and Anaheim.

Sprong scored his 14th goal in 47 games during his solid debut season in Anaheim, and Steel scored short-handed in the third period.

Grundstrom added the fifth goal of his debut NHL season — and his third against Anaheim — in the closing minutes.

Silfverberg scored his career-high 24th goal into an empty net with 1:12 to play.

The Kings would need a win Saturday in their season finale to match their lowest point total in a full season since 2007.

NOTES: Ducks C Ryan Kesler missed his 14th consecutive game with a hip injury. The former Selke Trophy winner has scored just 13 goals in the past two seasons while dealing with hip woes. Kesler, who will turn 35 years old this summer, has three seasons remaining on his $41.25 million contract extension, and he has said he will fulfill them. … Anaheim D Brendan Guhle incurred an upper-body injury in the second period. He had missed the previous 14 games with an oblique muscle injury. … Captain Anze Kopitar led the Kings in scoring for the 11th time in 12 seasons.