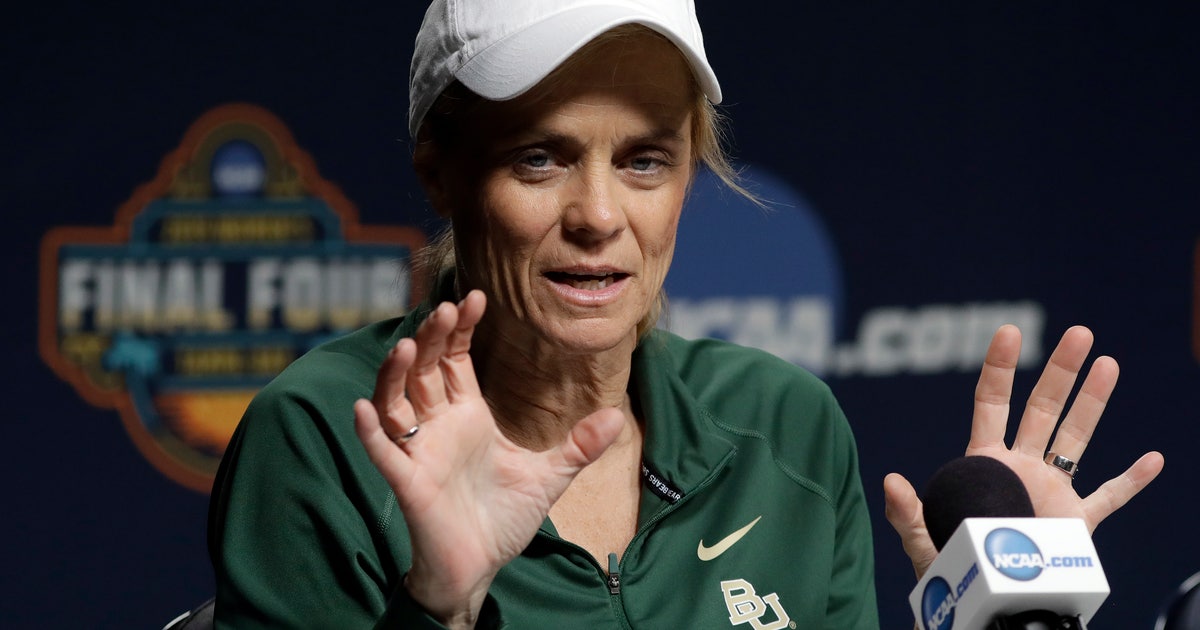 TAMPA, Fla. (AP) — Kim Mulkey climbed the steps to the dais at the Final Four, six-month-old grandson Kannon Reid in tow, and the baby’s proud mother watching from the side.

Family has always been important to one of the nation’s most successful women’s college basketball coaches, though never more than the past couple of seasons with Mulkey coping with the death of her first grandchild while also continuing to win big at Baylor.

The Lady Bears (36-1) will seek their third national title on Sunday, facing defending champion Notre Dame (35-3) in the first NCAA final featuring a pair of female head coaches since Mulkey and the Fighting Irish’s Muffet McGraw also met in 2012.

The matchup comes just days after McGraw made headlines by saying she will not hire male assistants in the future because she feels there should be more coaching opportunities for women in the sport.

Mulkey said Saturday that she supports McGraw, but quibbled with the idea of “never” considering a man for an opening.

Family is a reason.

Mulkey’s daughter, Makenzie Fuller, is a former Baylor player, as well as Kannon Reid’s mother and serves as an associate director of basketball operations for the Lady Bears.

The coach’s son, Kramer Robertson, is a shortstop for the St. Louis Cardinals’ Double-A Springfield affiliate.

“I understand her points, without a doubt. But I’m of the belief, I want the best person for the job,” Mulkey said. “I have a son, and I would be honored if my son wanted to coach next to me. (McGraw) has a son. I think she would be honored if he wanted to coach women’s basketball,” Mulkey added. “So I tend to stay away from saying the word ‘never.’”

McGraw walked back her comments, while stressing there’s absolutely a need to have more women on coaching staffs.

“We keep looking at ways to get our young graduates and alums into the game. There’s no room for them in the game,” she added. “Women are leaving the game because of the lack of a work-life balance.”

The Notre Dame coach cited UConn’s Geno Auriemma as an example of someone who’s done a “great job” in creating opportunities.

“He always has an all-female staff. … When you look and see more men than women on a woman’s staff, I think that’s not the optics that I would like to see.”

Mulkey carried her grandson, who born last October, onto the podium after beating Oregon in Friday night’s national semifinals.

Her son, in his third minor league season since being a fourth-round draft pick of the Cardinals out of LSU, tried to keep up with what was going in his mother’s game while playing one of his own at Northwest Arkansas.

“He’s playing during our game. He’s in the on-deck circle. He has the trainer get on the app, it was a tie ball, whatever, late in the game,” Mulkey said, noting Kramer was waiting for a thumbs-up or thumbs-down signal about the Baylor result.

“He said I’m freaking out there. I can’t focus,” Mulkey added. “He said I have a line drive hit at me, I field it, get it. I see a thumbs up. All the guys on the team are just, like, going nuts. You would have thought we won the national championship.”

As associate director of basketball operations, Fuller is in Tampa, Florida, for the ride.

Only a week into the 2017-18 season, she lost her unborn child about 18 weeks into her pregnancy.

The baby with two life-threatening birth defects had no heartbeat when Fuller went to a doctor’s appointment, and the baby girl was delivered after labor was induced.

“You bet I’m going to hang onto him. Holding a child up here is a heck of a lot more touching than holding one right here that’s deceased,” Mulkey said, extending her hands. “I’ve done both in the last year and a half. … In my world, anybody will tell you it is about family first.”

The view from the side of the podium is exhilarating, too.

“Oh my goodness. There’s nothing like it,” Fuller said. “Being a mom and seeing your child is the best feeling in the world, and just getting to experience this fantastic run with him and have him up there with my mom and myself, all the pictures and memories that are being made. It’s unbelievable.”